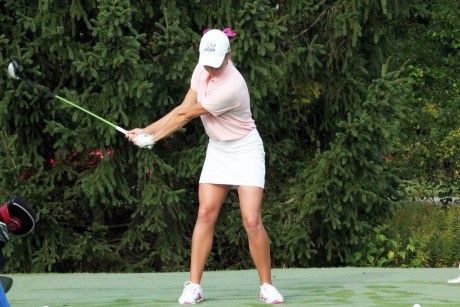 The Grand Valley State University women’s golf team kept riding its recent wave of momentum over the weekend with another top-level performance in the Pioneer Invitational hosted by Malone University.

The top finisher for GVSU on Sunday was junior Gabrielle Shipley, who earned her second victory in as many events by edging Ashland University’s Ali Green in a playoff hole.

“This fall has definitely shown me what I’m capable of, which is nice,” Shipley said. “I’ve really been working hard and seeing the outcome of that is really a confidence booster, so putting in all the hours and all that work is really starting to pay off.”

No. 2 GVSU came away in second place in the event behind Ashland.

GVSU coach Rebecca Mailloux’s team has been impressive as a collective unit lately. The Lakers closed out the fall season by nabbing two wins and a second-place finish in their last three tournaments.

“Overall it was a pretty good fall for her,” Mailloux said. “I expect her to close out her senior career playing well this spring.”

The team shot 305 in round one to keep pace with eventual champion Ashland, but was four behind the University of Findlay.

GVSU had two of its golfers in the top three after Saturday’s round, something the Lakers have been used to seeing in their last two events, the NCAA Division II National Preview and the Merrimack Invitational.

The Lakers knew they would need to be on their A-game Sunday to catch Findlay. It was going to take at least four low scores to pass the Oilers, and that’s what GVSU did.

Freshman Samantha Moss’ first round 76 was the best in her short collegiate career. Moss carded a 10-over 82 to grab a tie with senior Molly Esordi, who also took 16th by carding a five-over 77 on the last 18.

“I’ve always felt like I’ve been competitive my whole life, but just being with a team this good, it just makes me want to be more competitive and it’s really fun to be with such a great team,” Moss said.

Sophomore Alex Taylor recorded an 83 and an 80, which put her in a tie for 27th place.

Sophomore Julie Guckian continued to make strides in her game by earning her highest finish of the fall season on Sunday in 14th place.

“They’ve played well this fall,” Mailloux said of her team. “They finished fourth at our home tournament and today was definitely one of their best rounds they’ve put up.”

Hartigan and Shipley closed out the fall chapter of the season on a high note. Both golfers earned four top-10s this fall after the weekend action.

It’s going to be a long winter before they’ll face competition again, but the Lakers are hopeful they will net some serious gains come tournament time this spring.

They’ll need all the progress they can muster to topple powerhouse Lynn University – which has won two straight Division II national titles.