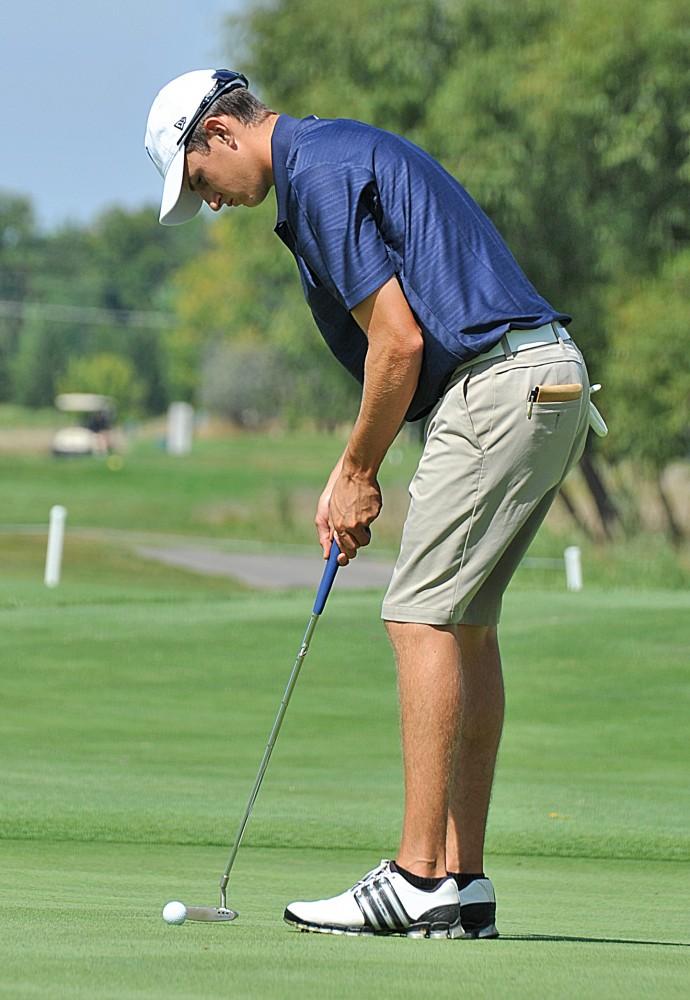 A week removed from his top three finish at the Ardensen Invitational, sophomore Tyler Polulak is back in the headlines and is once again the talk among the golf community at Grand Valley State University. Polulak made his first ever hole-in-one on the par 3 seventh hole at the Brickyard
Crossings Golf Club in Indianapolis. That was GVSU’s first hole-in-one since 2010.

“I didn’t see the ball go in, but judging by the crowd’s reaction after it landed on the green, I knew
there was a good chance it went in,” Polulak said. “It was really an unbelievable feeling. I was so
excited that I almost forgot to save the ball when I came up to the next hole.”

Besides Polulak’s theatrics, it was a pretty quiet tournament for the Lakers as they played up-and-
down throughout the two-day invitational, eventually finishing 12th among the field of 17.

“There was a lot of disappointment on our team after this tournament,” junior Jack Rider said. “There
was a lot of anticipation…and we just simply didn’t play our best golf.”

Rider and Polulak carried the Lakers at the Brickyard Invitaional as they posted scores of 221 and 225,
respectively. Senior Joel Siegel finished tied 70th overall with a total score of 233, while seniors Chris
Cunningham and Derek Barribeau rounded out the rest of the team with scores of 234 and 236,
respectively.

“Jack and Tyler both posted really good rounds this tournament,” senior Derrick Barribeau said. “I
don’t think really any of us were too happy with the way we performed, but we will just keep plugging
along and keep executing.”

Although the season is still just beginning, the Brickyard Invitation served as a preview for further
things to come down the road, as GVSU faced a number of teams at the tournament that they will see
again later in the season.

“We’ve all been playing in tournaments throughout the summer, so it’s really no excuse to play
poorly,” Rider said. “With that said, we’re not looking too much into this performance. We know our
capabilities, we just have to go out and simply play to our potential.”

However, the Lakers did finish on a strong note as they turned in a final round of 296—the best team
round of the day—which helped them considerably in the standings.

“I thought we had a much better feeling about our performance after our last round of the
tournament,” Polulak said. “Any little bit of momentum we can use will benefit us going forward.”

The Lakers will look to carry any sort of momentum over to the next tournament, which will consist of
schools from the GLIAC.

“We are really familiar with the course that our upcoming tournament is on, so that gives us some
added confidence,” Barribeau said. “It will be somewhat a preview of how the rest of the conference
fairs against us. If we can go out and shoot 75’s and under, we should be fine.”

The GVSU men’s golf team will be back in action this weekend when it travels to South Haven to play
in the GLIAC North Fall Invitational.