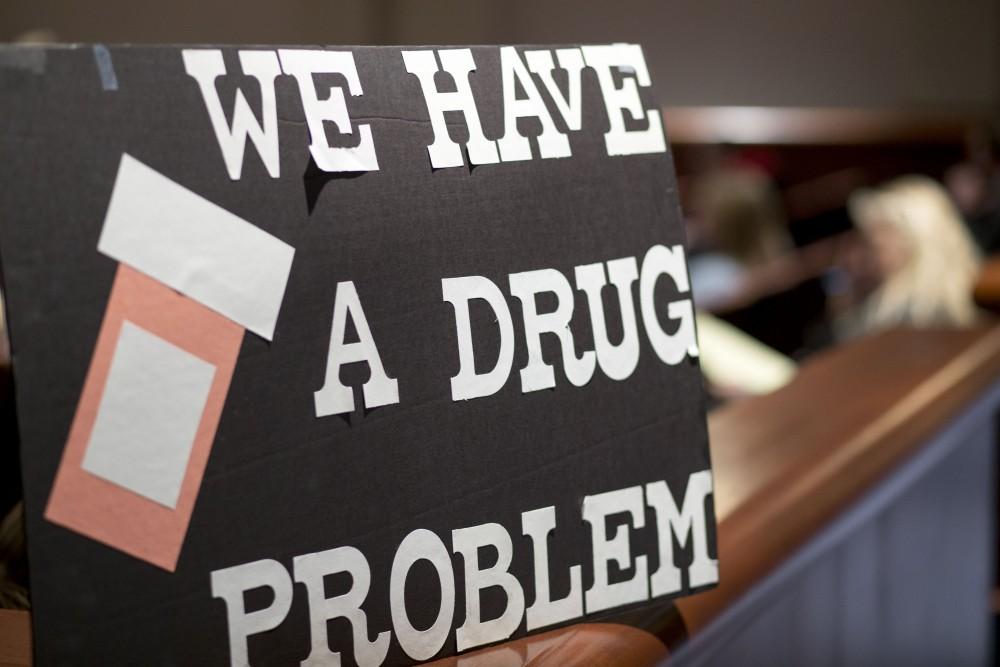 GVL / Sara Carte The Opioid Public Health Crisis Panel was held at the Loosemore Auditorium in the DeVos Center on Thursday, March 22.

When people hear the word “opioid” heroin is often the first thing that comes to mind. However, what people forget is that opioids can be prescription drugs like oxycodone. These drugs change the way the brain handles pain.

To discuss the issues surrounding opioids, a panel of specialists from doctors to police officers gathered together on Thursday, March 22, at the DeVos Center’s Loosemore Auditorium to explain how heroine users start their path.

“80 percent of heroin users started with a prescription opioid,” said Scott Haga, physician assistant for SHMG Center for Integrative Medicine. “Whatever it is we see those patients for, we often see it start to spiral from there.”

The panelists detailed the effects of heroin, and why patients so often make the deadly switch from painkillers to hard opioids.

“The addiction starts in the mid-brain in the hippocampus,” said Barbara Homrich, co-owner of ClearWater Counseling & Wellness. “The brain learns to attach the memory of the euphoric high with a relief from a flooded pathway. … Every time the user takes the elicit drug they get a massive dose of dopamine. Overtime, the brain reduces the amount of dopamine it would normally create.”

Dopamine is the chemical your brain releases when you feel enjoyment. As an example, a person can feel like a 10/10 when they are feeling at their happiest. However, taking heroin would put the brain’s levels at a 20/10. Subsequently, the user feels their life is never as good as it is when using the drug.

“We live in a pill-popping nation; someone goes to a physician they don’t want to hear they should lose weight, change their posture or do exercise,” said Jane Toot, Grand Valley State University professor of physical therapy. “Those all take time and aren’t a quick fix and a rush like painkillers are.”

People start with painkillers and later need stronger opioids to feel the same thing that they once did, explained Chuck DeWitt, chief deputy of corrections at the Kent County Sheriff’s Department. This opens the pathway for heroin and worse addiction, according to DeWitt. Users are almost always eventually caught and end up in jail.

“Fatal overdose stems from the most dangerous time, when inmates come out of jail,” Haga said. “We know in our clinic, 72 hours after someone comes out of jail is when the person is most at risk to use.”

DeWitt said medical staff and nurses are available to meet with inmates to address their addiction 24/7, and the staff is trained to look for signs of withdrawal, too. He said by medically assisting the inmates with methadone, a morphine-like drug, the staff are able to help inmates slowly ween out their heroin addictions prior to leaving the prison.

“From where I stand the next crisis is rural Michigan,” said Eric VanDePol of Spectrum Health. “There are not enough providers locally for communities north of here, and as a result parents are finding their teenagers dead in McDonald’s bathrooms.”

VanDePol explained that users often cannot wait to get back to their homes after receiving heroin. He said this leads a user to go into the first area that they can to use.

A solution to many of the issues talked about during the discussion was education. DeWitt expressed that schools should educate children from elementary school through high school about the dangers of heroin and the path that painkillers lead to. He said there is maybe one billboard in Grand Rapids about these dangers, and that education is a necessity to improve upon moving forward.