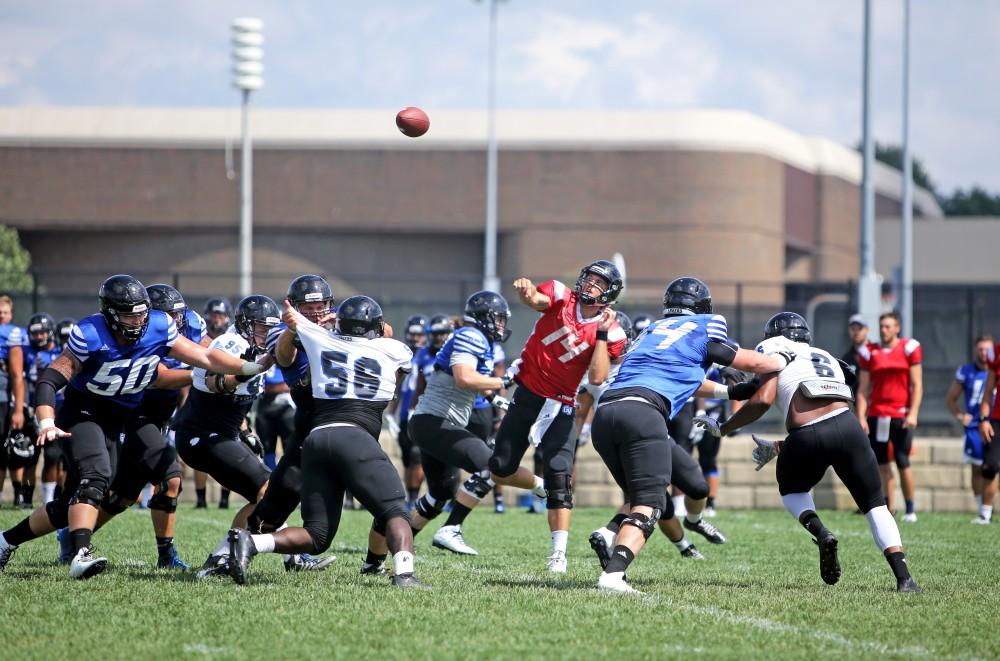 The 2016 Grand Valley State football team, coming off of a 12-3 (8-2 GLIAC) season and a heartbreaking loss in the national semifinal, had one motto this past offseason.

“One thing we preached about camp this year was being the hunter, not the hunted,” said GVSU junior receiver Brandon Bean. “Obviously you want to win every game, but if you’re the hunted, you’re more timid, more susceptible to adversity.

“When you face adversity, if you’re the hunter, you don’t really care. You’re still gonna get after it.”

The Lakers will need to be hunters this year if they plan on improving upon a season a year ago that saw them make a Cinderella run in the playoffs. That team had to shut out critics who cited a lackluster 6-5 2014 season as a reason the Lakers wouldn’t be able to contend.

This year, they have to silence the hype of a team on the rise. The Lakers are ranked second in the 2016 Sporting News Division II preseason poll, and first in the GLIAC coaches’ poll.

“There’s some preseason rankings and a lot of outside noise, but we have really high standards around this building, and we’re gonna try to stick to those standards,” said GVSU head coach Matt Mitchell. “We’re gonna be the best version of Grand Valley that we can be.”

GVSU returns 15 starters this year (10 on defense), as well as several second-team players who saw the field last year. Starting redshirt sophomore quarterback Bart Williams enters his second year under center, and will try to improve upon a year that saw him lead the most prolific passing offense in GVSU history.

As a freshman, Williams threw for a GVSU single-season record 4,206 passing yards and a Division II-best 45 touchdown passes. Mitchell said it would be unfair to expect a repeat performance statistically from Williams, but is counting on him to be more of a leader this year.

Williams’ teammates voted him as one of two team captains—the other, senior defensive lineman DéOndre Hogan—and he says he’s ready with one full year of experience under his belt.

“Personally, (this year) feels way different,” Williams said. “Last year, I hadn’t really played in a college football game. This year I think I’ll feel a little more calm out there, especially in the first three games. Looking back to how I felt at the end of last season, compared to the beginning, I didn’t feel very comfortable.”

Williams will have no shortage of offensive weapons to work with. Senior receiver Matt Williams seems primed for a prolific final year in Laker blue after leading the team with 72 catches, 1,357 yards and 17 touchdowns. Bean (628 yards, 6 touchdowns) will fill the No. 2 receiver vacancy left by dual-sport standout Jamie Potts. Bean led the GLIAC in receiving yardage last year before getting hurt mid-October.

Though the Lakers know what they have at their top two receiving options, it’s the dark horse players—namely receivers Urston Smith and Nick Dodson—that will give the offense the depth it needs to be dominant.

Both Smith and Dodson are coming off of strong offseason performances.

Sophomore running back Marty Carter, who racked up 889 yards and seven touchdowns as a relief back to Kirk Spencer last year, is slated to spearhead a Laker run game that was often inconsistent last season.

The biggest question for the Laker offense is the line. After losing talented players like Jim Walsh and Brandon Revenberg, Mitchell plans on rotating several different line combinations early this fall. Senior Aaron Cox is cemented in at center and sophomore Ben Walling has a strong grasp on left tackle.

Beyond that, four players are in the mix for the open guard positions and three players are vying for the right tackle spot. There will be an open evaluation process in practice and in games until the starting five is determined.

On the other side of the ball, the Lakers return 10 starters—the lone absence being all-time sack leader (34) Matt Judon, who now plays for the Baltimore Ravens in the NFL.

Though replacing an NFL talent like Judon is no easy task, the Lakers are confident they can make up for the loss as a unit. The Lakers received senior graduate transfer Sydney Omameh (16.5 career sacks) from Ohio Dominican, and returning players Mark Rosenquist, Dylan Carroll, Alton Voss and Hogan provide for an intimidating front four.

“We’re big on playing within the scheme of our defense,” Hogan said. “That’s what Judon did while he was here. He just took advantage of opportunities when they presented themselves, and that’s what we expect the next man up to do.”

The Lakers will open the season at home versus Tiffin Thursday, Sept. 1, where they’ll unveil their new 977,408 pixel video board, the largest in Division II. Last season, the Lakers narrowly escaped the Dragons on the road, 49-42. The Dragons are led by quarterback Antonio Pipkin (3,227 passing yards, 32 touchdowns).

With the season-opener only days away, Bean has a message for opposing teams and Laker football fans.