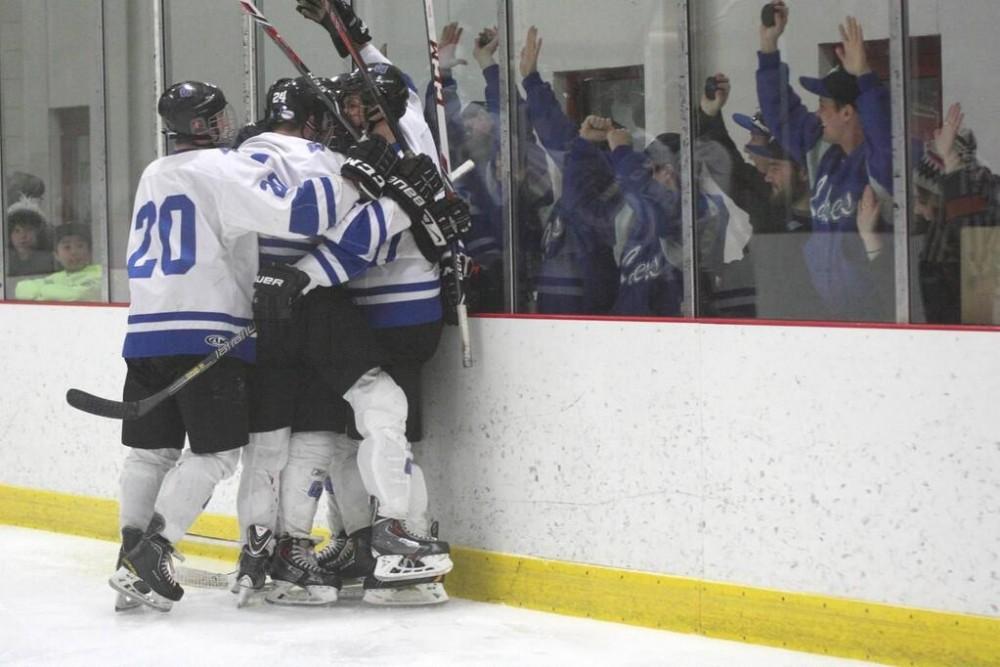 Take a look behind the glass near the opposing goaltender. Those guys are part of the student section too, although they aren’t sitting with the rest of their peers. Clad in their matching blue jackets stands the GVSU club baseball team.

It’s a show of support, camaraderie and mutual club respect.

“It’s pretty neat that they kind of started this out and that we were able to form a relationship out of it,” said center Chris Norkus of the Division III hockey team. “Once in a while we all hang out…I definitely think this all was created because of them coming out.”

The tradition – if it can be called that – is still a relatively new one. Various members of the club hockey and baseball teams lived together through what can be chalked down to serendipity.

Club baseball players Michael Tagliavia and Derek Verbruggen were two such players – roommates with hockey player Drew Stanbury. The idea started out as a simple one.

“One day we decided to give them a good student section, and they returned the favor,” Tagliavia said.

The baseball players did just that. They began to appear with regularity at the Division III hockey games, always posting up at their familiar spot behind the opposing goaltender.

Except when they are forced to relocate, that is.

Norkus recalls a game last year in the regional finals against Hope College when GVSU’s de facto cheer section was feeling particularly rowdy. They brought pennies along and began tapping them on the glass (a common tactic) in an effort to get in the head of Hope’s goaltender.

To the surprise of few, it seemed to work.

Hope’s goaltender didn’t take too kindly to his new group of friends. He complained to the coach, and the coach in turn appealed to the referee. The baseball team was forced to relocate – simply another sign that they did their job perfectly.

Although penny-tapping is a favorite among the crew, it’s just one of a number of tactics reminiscent of the Green Men, the famed fan duo of the Vancouver Canucks.

The GVSU crew can be seen behind the glass with blow-up penguins, boom sticks and a number of other trinkets used for both their amusement and the annoyance of the other team.

The members of the hockey team notice, and give their effective fans their due.

Before a game last season, GVSU goaltender Jiri Aberle sent a tweet directed to the baseball team. He promised “something special” if the cheering section gave a good showing. Predictably, the baseball guys did just that.

Now, before every game that Aberle is in net, he can be seen jumping up and crashing into the boards in front of his baseball counterparts.

The hockey team, of course, returns the favor. A number of players show up to the baseball team’s spring games, although the opportunity for a raucous student section doesn’t present itself quite as well at a baseball diamond as it does a hockey rink.

“The reason we did it is, even though it’s a club sport, it means a lot to us and we want to get some student participation,” Tagliavia said.

So next time you’re heading to a hockey game, keep your eyes peeled for those familiar blue jackets.

Maybe take some pennies, too.