Poll: US prefers hemorrhoids to Congress 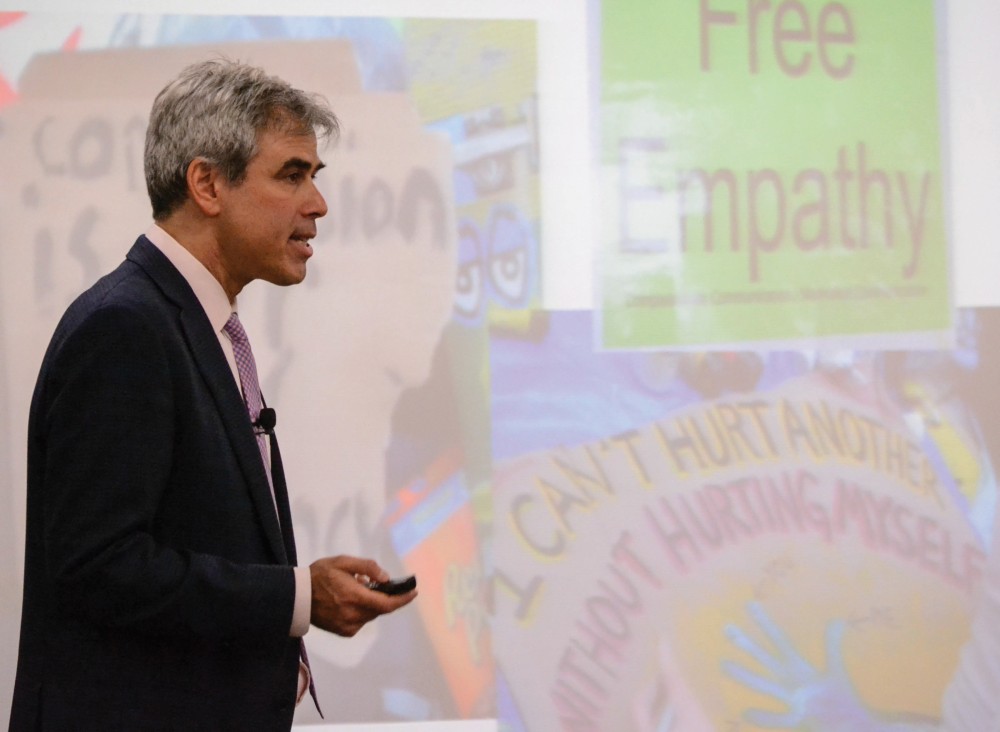 GVL / Hannah Mico. Jonathan Haidt, author of "The Righteous Mind," spoke at the Eberhard Center downtown on Tuesday evening about the concepts in his new book and shared much of the psychological research behind his writing.

A recent survey by Public Policy Polling found that 86 percent of Americans disapprove of Congress. In fact, voters had a higher opinion of jury duty, witches and hemorrhoids than their lawmakers in Congress.

“Why does it feel like in America we have run out of road?” said Jonathan Haidt, a social psychologist and professor at New York University’s Stern School of Business. “Like we are going off a cliff?”

Haidt said the blame falls on the nationwide polarization between Democrats and Republicans.

More than 300 community members gathered Tuesday on Grand Valley State University’s Pew Campus to listen to Haidt’s discussion, which was part of the Hauenstein Center’s series, “American Conversations.” The talk was centered on his book, “The Righteous Mind: Why Good People are Divided by Politics and Religion.”

“Our goal is not to turn Democrats into Republicans or Republicans into Democrats. That’s not going to happen,” said Gleaves Whitney, director of the Hauenstein Center for Presidential Studies. “But it is to prepare a new generation of leaders to deal effectively with diverse ideas and cultures.”

This problem of polarization isn’t limited to Congress, Haidt said. As a nation, Americans have rapidly followed suit. Gone are the days of the centrist; now there are liberals on one side and conservatives on the other.

“They don’t talk to each other. They don’t know each other,” Haidt said. “Americans used to live near people who were politically different from one another, but not so much anymore. Now we have the separate regions of the country—the red and the blue. You take this really complicated machine and you open this plug and say no more motor oil, no more lubricant, no more personal relationships. All the oil drains out; the machine seizes up, and that’s where we are.”

The solution, Haidt and Whitney agreed, is to start at the local level.

“Maybe we begin to cultivate our own garden,” Whitney said. “Let’s start with common ground in our families, in our neighborhoods and in our communities. Maybe we can achieve real results because we have so much in common when we look at people near to us. I think we can find, in our own sphere of influence, the opportunity to exercise the principle of compromise.”

Haidt grew up in a liberal town, went to a liberal university and is now an academic, which is often considered one of the most liberal professions.

“I never really encountered conservative ideas until I just took a book off the shelf at the age of 40,” he said. “Conservatism, as I was growing up, was sort of this bad thing that bad people did. Now that I’ve really tried to understand all sides, I think, ‘Why on earth wasn’t I told about this in high school? Why don’t we have teachers who come in front of the class, who are different from each other, but respect each other and even joke about it? Wouldn’t that take some of the poison out of it? Wouldn’t that make it seem like it was okay to talk about this stuff without hating each other?’”

The answer is yes, Haidt said, and changes need to be made now.

“The present situation is not something that happened in the last couple of years,” he said. “It’s gotten a lot worse, but it’s been building for a long time. What’s happening to us is a set of complicated processes that have been playing out over about three to five decades. Some of it we can’t reverse, but some of it we can.”