GVSU skates past Michigan, gears up for MSU 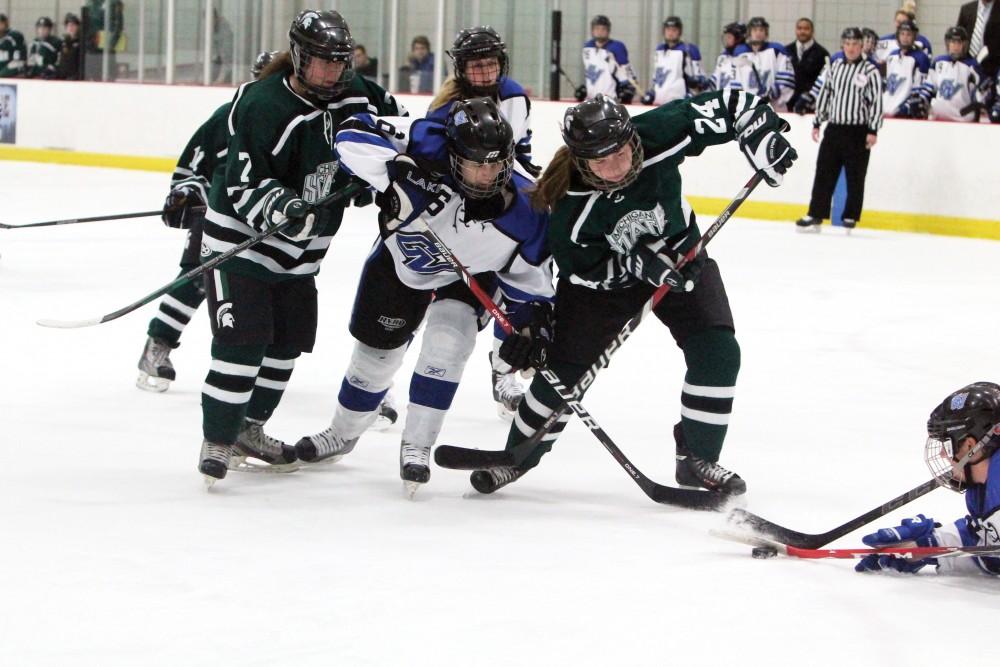 The Grand Valley State women’s club hockey team finished its regular season with an undefeated two-game series against the University of Michigan over the weekend. Saturday’s back-and-forth contest ended in a 3-3 tie, but the Lakers got it going offensively the next day and took the Wolverines down, 6-4, in Ann Arbor, Mich.

GVSU faces a familiar foe, Michigan State, in the opening round of the CCWHA Playoffs. The fourth-seeded Lakers, who beat MSU twice earlier this month, play the fifth-seeded Spartans on Thursday at Flint Iceland Arena.

Michigan, the tournament’s second seed, jumped out to an early lead against GVSU on Saturday, scoring just 1:53 into the game. The Lakers responded quickly, however, when junior Karyn Schmaltz scored on an assist from Allison Lowe.

Stacey Mathieu struck next for GVSU after she put the puck past Michigan’s netminder with 10:11 left in the period on an assist from Alexa Tenwalde. The Lakers took a 2-1 lead into the first intermission, but were not necessarily thrilled with their performance.

“The girls were saying that they felt like they should be playing better,” said co-head coach Sean McKernan. “We were playing hit or miss the entire game and we had a chance to beat Michigan, who is ranked higher than us (in the rankings).”

It was all Michigan in the second period as two Wolverines, Caroline Hurd and Kalli Bates, found the twine. Michigan led 3-2 heading into the third period.

“Michigan does a good job of shooting from anywhere on the ice. They also crash the net and that creates a lot of opportunities for them,” McKernan said.

The final period wore on and the back-and-forth hockey continued until GVSU’s captain, Tenwalde, capitalized on a shot with 3:32 remaining in the game to even the score.

“We were all working hard, and I caught a lucky break and won a scrum for the puck in the corner,” Tenwalde said. “I got a rebound off a shot and was able to score.”

The Lakers couldn’t capitalize on a late opportunity in overtime, however, ending the game in a 3-3 tie.

On Sunday, Michigan responded to an early GVSU goal and knotted things up at one apiece heading into the second period. The Wolverines scored two breakaway goals in the middle of the second, taking a 3-1 lead.

“We didn’t get down. We stayed positive, trusted each other, and tied it up,” Tenwalde said.

Tenwalde notched her second goal of the series for the Lakers with 5:23 left in the second period, before GVSU’s Hannah Aittama found Alisha Day with 30 seconds left, making it a 3-3 game heading into the second intermission.

GVSU freshman Frankie Wojtylo scored in the third for the Lakers, along with Day on a coast-to-coast for a score. With the Lakers up 5-3, the Wolverines were able to respond with a goal, but an empty netter with 28.1 seconds to play finished the scoring for the Lakers in the 6-4 victory.

“We stepped up our game in the third and executed very well. We were able to make big passes and catch people with speed and shoot with high efficiency,” McKernan said.