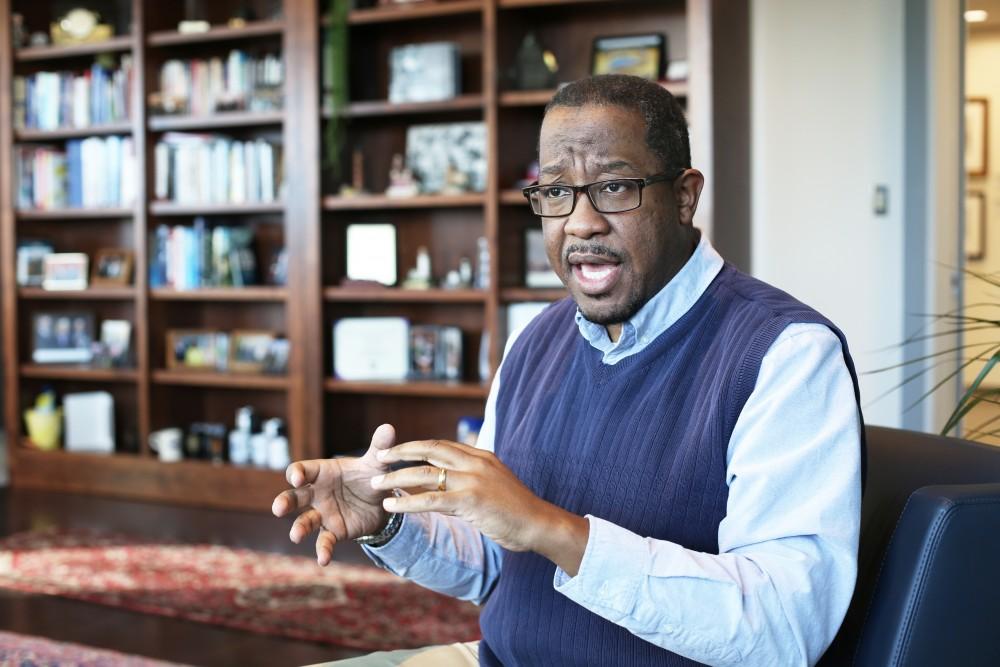 For the third time this semester, Grand Valley State University students, faculty and staff received a campus safety notification informing them of a sexual assault in the GVSU community. The Dec. 3 notification was in reference to an incident at 48 West apartments.

In addition to the new case, the individual who filed the Title IX complaint with the U.S. Department of Education’s Office for Civil Rights in regard to GVSU’s sexual assault policy has stepped forward. Sara Chittenden, a senior at GVSU, filed the complaint in October because she is unhappy with how the university has handled her sexual assault case.

“I don’t really think they do a very good job,” she said. “I think they’re just now starting to admit that there needs to be some change in light of the public eye being on them now.”

Chittenden said she was raped at her off-campus apartment by a GVSU student. She didn’t go to the police and the perpetrator wasn’t criminally charged. The case went to trial on campus last year and was handled by university staff.

The perpetrator was assigned the following sanctions by the hearing coordinator at GVSU:

1. (Student) is prohibited from contacting (Chittenden) either directly or (in)directly, through electronic media, phone, etc.

2. (Student) is to remain on probation during the remainder of his student status.

3. (Student) is required to meet with the coordinator of the Men in Action Group to discuss consent and the role of men in preventing sexual assault and sexual violence toward women; and

“They kind of hinted at the fact that because I wasn’t at the trial is why the punishment was lax,” Chittenden said. “There needs to be more accountability and transparency.

“When I expressed that I didn’t want to be in the room, it was treated as ‘I need more therapy,’ instead of ‘I don’t want to see this person.’ They kept talking to me saying it can be empowering, but I would say it’s not empowering for me. I don’t think people understand just how awful it would be to sit there and listen to him try and defend himself. Even though you can do it through video conference, I would still have to hear and probably see him.”

Dwight Hamilton, GVSU’s Title IX officer, said that students have options available to them if they feel uncomfortable attending the trial.

“I’ve always told every one of our victim/survivors, once I’ve made a finding, I’ve said that I will go in as the complainant, but there is no one that is better at conveying what happened in that situation than you are,” Hamilton said. “Some elect not to do so, and I understand that because that’s a very scary situation. We do try very hard to make that a safe environment.

“We don’t require the victim/survivor to be in the same room with the assailant. In all of the situations that I’ve been a part of, the victim/survivor has appeared remotely. They’re in another building, they’re away, and there’s a support person there from the Women’s Center with them.”

Chittenden said that Hamilton contacted her after the trial saying he would appeal her case to get a harsher punishment for the perpetrator.

“I received an email with the sanctions back in April, and (Hamilton) said he was going to appeal them because they are unacceptable,” Chittenden said. “But that’s the last email I got, and since then I haven’t heard anything from them.”

Chittenden’s case was handled under the procedure set forth in the existing student code. However, since then the university has implemented an interim sexual misconduct policy, which went into effect Nov. 21. The university plans to seek community input about officially changing the policy next semester.

“We want there to be buy-in by the community,” Hamilton said. “We’ll use the interim misconduct policy as a starting point, but if there are things that we need to add, remove or whatnot, we’re going to seek the partnership of our faculty, our staff and our students.”

According to Hamilton, the interim policy has been in the works much earlier than the Office for Civil Rights investigation. Hamilton began working on the revised policy this July, months before the Title IX complaint was filed on Oct. 6.

“We’ve acknowledged that our existing system works better when it’s an issue that doesn’t concern safety as much as it does more minor behavior,” Hamilton said. “Someone drinks underage, or there’s an issue of academic dishonesty. We acknowledge that in order to get through these cases in a prompt, thorough, effective manner, we need to really look at each phase and identify what protects the due process and really streamline it so it serves that purpose.

“The new policy streamlines that process considerably. We don’t have the duplicative Title IX finding and then judicial makes a finding. Now the finding still stays within Title IX but goes directly to the Dean of Students for remedial sanction if there is a finding.”

The university remains confident that the investigation by the Office for Civil Rights will go well. In addition, GVSU President Thomas Haas said he is glad that conversations are happening about sexual assault at GVSU.

“Actually, I’m very, very satisfied that these incidences are being brought to light now,” Haas said. “At the end of the day, that’s what we want. We can’t just think that the previous behaviors as institutions set the tone for the future. I think we need to set that tone, especially in this particular area.”

On Nov. 3, the Lanthorn published a letter to the editor from Haas stating that GVSU will not tolerate sexual assault. However, Chittenden found the letter to be more hurtful than helpful.

“Initially I was kind of insulted (by the letter),” Chittenden said. “It’s hurtful to have so many administrators and staff be talking about the investigation without talking to me personally. I made myself really available, and I gave really explicit ideas on what needs to change, but they keep talking about me as if I don’t exist and that really bothers me.”

In addition to the letter, Haas has also taken the initiative in a multitude of situations to express his stance on sexual assault on college campuses. He helped write the sexual assault policy statement for the NCAA this summer, as well as the statement on sexual violence prevention for the Presidents Council of state universities of Michigan.

“I felt so passionate about this that I wanted to take the lead, nationally as well as locally,” Haas said.

According to Hamilton, GVSU has been ahead of the legislation about sexual assault for quite a while.

“In California, by state law, they require their public institutions to utilize an affirmative consent standard for determining whether sexual assault occurred. We did that two years ago,” Hamilton said. “There has been an impetus to change the standard of proof to preponderance of the evidence. Well, we did that several years ago.”

The university also revised its jurisdiction two years ago.

“If the incident involves two Grand Valley students, it doesn’t matter whether it occurred on campus or at one of the apartments or on spring break or traveling abroad,” Hamilton said. “Back in 2011, that wasn’t the case. A lot of these incidents do occur off campus, and we can’t have that same frame of reference. That changed back in 2012.”

“We make it very clear that we go up to anything up to expulsion,” Hamilton said. “They’re not exclusive. You can have several of these sanctions.”

The determination of the severity of the sanctions rest on the circumstances of each case. The university’s definition of sexual assault is purposefully broad, so the sanctions must be able to accommodate a variety of infractions.

“The framework for discipline has historically been educational, but we acknowledge that when we’re dealing with an issue of violent sexual contact, education is not there; it’s an issue of safety for our community as a whole,” Hamilton said. “It’s a different framework.”

While the university has received significant attention due to recent sexual assaults, Haas applauds members of the GVSU community who are working to shed light on sexual assault.

“It’s not the legislative piece, even though I understand that we have to do that. If we could help each other have the behaviors that we want in each other, so much the better.”

Hamilton agreed, adding that the responsibility to end sexual assault lies with all members of the Laker community.

“I think that we all have a part to play at eliminating sexual assault on our campus,” Hamilton said. “It is largely a cultural issue. We have, unfortunately, tolerated that type of behavior through a variety of different behaviors.”

Hamilton also stressed the importance of not blaming victims.

“The person who is ultimately responsible for a sexual assault is the assailant,” he said. “It’s not an issue of ‘what can a young woman do,’ it’s ‘don’t assault.’”

The best thing that a friend can do, according to Hamilton, is to listen to the victim/survivor.

When people begin asking questions about what the victim/survivor was wearing or why they were at a certain place at a certain hour, the blame is then transferred to the victim rather than the assailant.

“That person is going to shut down and we’ll never see them,” Hamilton said. “We lose those students. We lose those students from our community and we never had the opportunity to interact with them. That’s the worst reason ever to lose a student. We don’t want to lose any of our students, but that’s a horrible way. We want to be able to be there and help them.”

In addition to helping victim/survivors receive the necessary resources, the campus community as a whole can aid in preventing sexual assault from taking place.

“I think our men have a responsibility to their peers to say what is acceptable behavior, why consent is important, why jokes about rape aren’t funny,” Hamilton said. “This is a serious situation.”

“Everyone has a mother, some people have sisters, they may have girlfriends or whatever,” Hamilton said. “But everyone is a human being, and seeing our community treating one another like human beings, that’s going to hopefully eliminate sexual assault.”