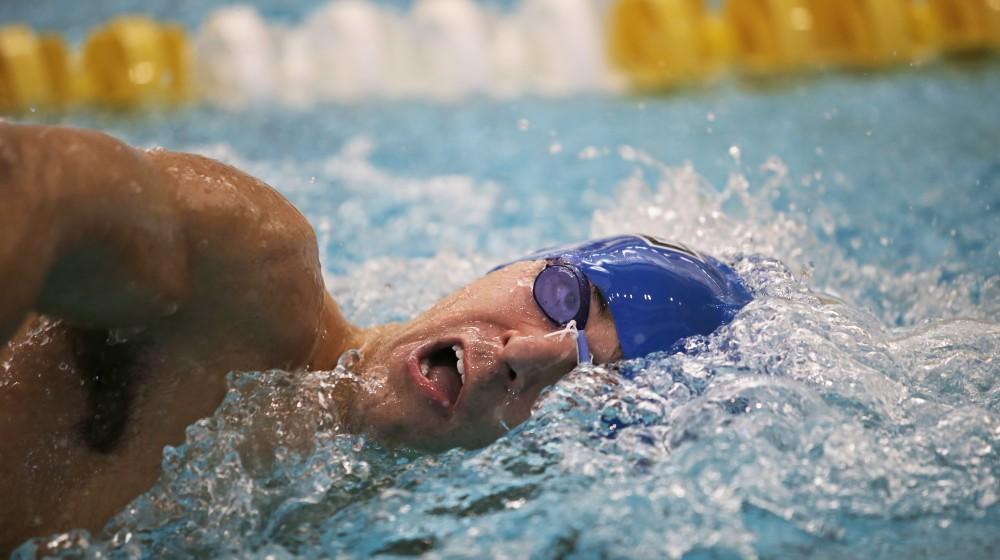 “If we win the relay, we would have won the meet,” said coach Andy Boyce.

The Milan Medo, Nate Wagner, Nick Zacek and Danny Abbott relay team fought to outlast the SCSU team, but ended just 1.03 seconds behind. As was the case all day – the Lakers were just a few seconds away from tipping the scales in GVSU’s favor.

It was still an impressive day for a few, like Tyler Keelean – who qualified for nationals in the 1-meter dive – and Gianni Ferrero. Ferrero was nabbed three wins on the day, taking first in the 100 yard backstroke (50.60) and the 100 yard freestyle (45.46).

“He’s in incredible shape,” Boyce said of. “He continues to push himself both in practice and the weight room.”

Ferrero continued his winning ways with a time of 1:40.46 to take first in the 200 freestyle, finishing just ahead of teammate Nate Wagner.

Freshman Samantha Postmus was another three-win holder for GVSU. Postmus finished with a time of 5:06.10 in a 500 yard freestyle win, and seized wins in the 1,000 freestyle – outpacing the second-place finisher by more than 16 seconds – and in the 200 yard IM.

Off in the deep end, the Lakers dove well collectively.

Keelean and Taylor Wiercinski earned victories in the 1-meter dive on the men’s and women’s side, with Keelean’s 330.60 final points earning him the national qualifier.

“It was pretty good to go against competition that went to nationals last year,” said Keelean, a transfer this year from Eastern Michigan University. “Pretty much my goal was to make it to nationals this year, so it feels good to qualify.”

Wiercinski outshined the rest and took first in the 3-meter dive. She won both diving events by an average of 17-plus final points.

The Laker women were able to take care of business in the meet, edging SCSU rather easily 176-124, but did have a few very close races.

Sarah Roeser contributed with a victory in the 100 freestyle, pulling in with a time of 53.30, after finishing less than a second out of first place in the 50 yard freestyle.