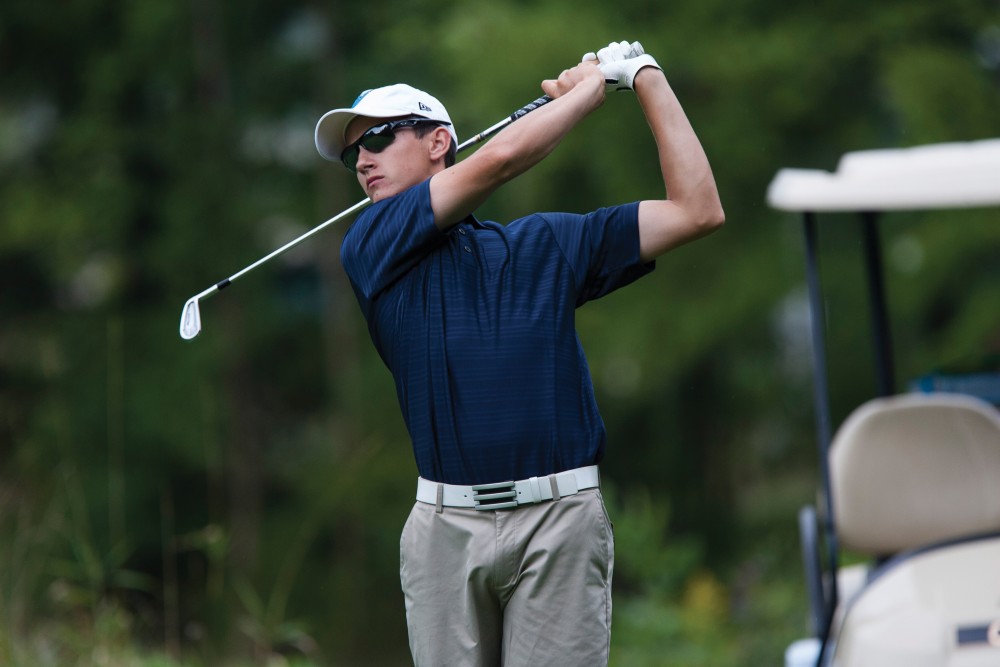 Grand Valley State University’s men’s golf team finished off its fall stint on Sunday with a tie for third at the GLIAC Championship in Georgetown, Ky.

It was consistent golf all around for GVSU’s players, led in part by Tyler Polulak’s 36 pars over the weekend, 14 of which were recorded on Sunday. Behind him was Chris Beltzer with 34 pars, along with Domenic Mancinelli and Alex Nannetti who racked up 32 pars each in the 54 holes.

Polulak, a junior, highlighted the tournament and led the Lakers with his five-way tie for sixth place individually.

“(Tyler) has been our most consistent player all fall,” said coach Gary Bissell. “It wasn’t a shock to see him play well again. He’s been doing that for us all fall.”

In addition to Polulak’s impressive performance, redshirt senior Jack Rider and the freshman, Mancinelli, polished off the tournament with 12 birdies and 11 birdies, respectively.

Given that, and his paring of 30 holes, Rider played fairly well and very Rider-esque for his season thus far. But the Kalamazoo, Mich. native had his share of shortcomings on Saturday. He carded a bogey on nine of 18 holes in round two, finishing in a tie for 11th after his round-three 5-under 67.

“It was nice to shoot a couple good rounds to end the (fall) season,” Mancinelli said. “Just wish it could have been three.”

The Lakers led the way after day one of the event, tallying an impressive score of 283. Mancinelli (70) and Nannetti (71) scored career lows for the round, and GVSU had all four of its countable scores under par.

But the second day proved vital to the results of the tournament. After the first 18, GVSU had three schools hot on their tail within six strokes of the lead.

“What I’ve learned the most is that every shot counts. You never know what you need to win,” Mancinelli said.

If the Lakers were to stay in control of their fate, they’d need to match their collective performances in their next rounds.

On Saturday, they were unable to do that and dropped in the leaderboard as a result.

“The second round was pretty catastrophic and tough to come back from,” Bissell said. “Not often are you going to have five guys collectively play that bad.”

Polulak recorded a score of 74. Mancinelli shot a five-over-par 77. After Rider and Beltzer came in with a pair of 78s and Nannetti with an 11-over 83, the Lakers sat at eighth in the tournament with a 590.

“Our second day obviously doesn’t show our potential, but we played well in the first and third rounds,” Polulak said.

Round three was much the opposite. They jumped five spots on the leaderboard while posting a score of 281 on Sunday to grab a tie with Lake Superior State University for third place ( 8).

GVSU mastered the course with 45 birdies over the weekend, four more than the tournament winner, Tiffin University.

Polulak finished the event near the top in par 5 scoring, averaging 4.58 strokes per hole (-5).

There appeared to be a few rotten holes that spoiled what could have been a potential victory for GVSU.

“It was pretty cut and clear that day two kind of cost us the whole thing this week,” Rider said.

Nonetheless, the Lakers earned a tie for third amongst their conference foes, which is enough for a chip on the shoulder to foster their competitive edge. The senior leader, Rider, has no doubts about how his team will fare come late spring when they will presumably be competing in regionals.

“We have the talent to get there. If we keep heading in the direction we’re heading, we’ll be just fine,” Rider said.