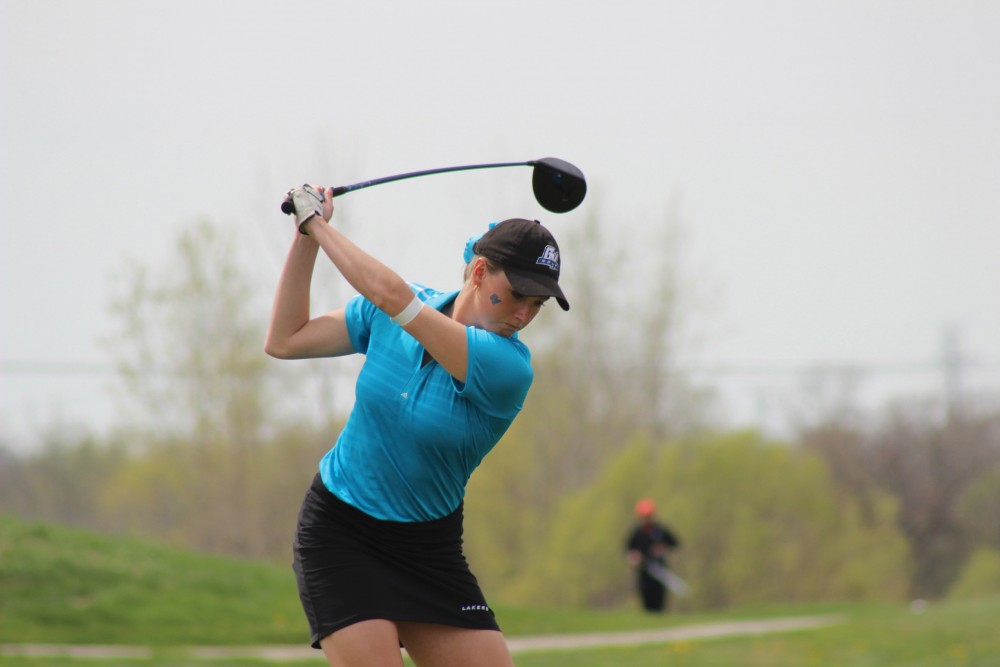 The Grand Valley State University women’s golf team showcased its potential against some of the top teams in the state of Michigan over the weekend at the Mary Fossum Invitational in East Lansing, Mich.

Adjustments to the tough conditions and long course made all the difference for the Lakers after round one.

“It took them a little bit to adjust,” said GVSU coach Rebecca Mailloux. “It was definitely some tough conditions, but they learned a tremendous amount that’s really going to help them going forward on some little-bit-easier golf courses and not as tough competition.”

It certainly was a good start for junior Gabrielle Shipley, who didn’t seem to let the level of competition intimidate her.

“I went out there with the mindset of playing my own game because there was a great field of competition,” Shipley said. “I’m very excited and very proud of myself.

“I proved to myself that even though I went to a DII school that I can still play with all those girls that went to big DI schools.”

She had an even-par 72 and a two over par 74 on day one. After shooting 76 on the last 18 holes, she stood at the number two spot on the leaderboard (222), one shot behind Florida International University’s Meghan MacLaren, who won with a score of 221.

“It definitely was a boost of confidence,” Shipley said. “I had a great summer so I really wanted to really progress with that and I think this tournament definitely helped me do that.”

Mailloux, who has seen Shipley progress through the years both in practice and on the links, didn’t seem to be surprised.

“She had a great three rounds, a great tournament,” Mailloux said. “Against a really strong field, it definitely shows where her game is at. Definitely an unbelievable performance for her and just real steady golf for three rounds, so I am real proud of what she did.”

Another Laker notched a top-ten finish, too.

GVSU’s senior leader Kelly Hartigan, who is tied for the most individual wins in school’s history, finished 10th in the event.

The performance was the first step of her early goal to place in the top-10 at both DI tournaments this fall. She has the chance to do it again at the next tournament, the Ball State Cardinal Classic, set to begin Sept. 22.

No matter whom they’re competing against, the Lakers could certainly get used to the level of success they’re seeing.

One person who is especially excited for the rest of the fall season is freshman Samantha Moss, who says she’s looking forward to learning all she can from the team’s experienced leaders.

“All I can say is I’m really excited,” Moss said. “I’m going to learn so much this year. I can’t wait to work with my coach and my teammates. I can only get better, so I’m really excited to see how good I can get and hopefully shoot some good scores out there.

“Facing the Division I schools is just better experience for everybody on the team just because they’re bigger schools, longer courses and you just get better every time.”

“It was definitely a test of golf for them,” Mailloux said. “I’m very pleased with where we ended up.”