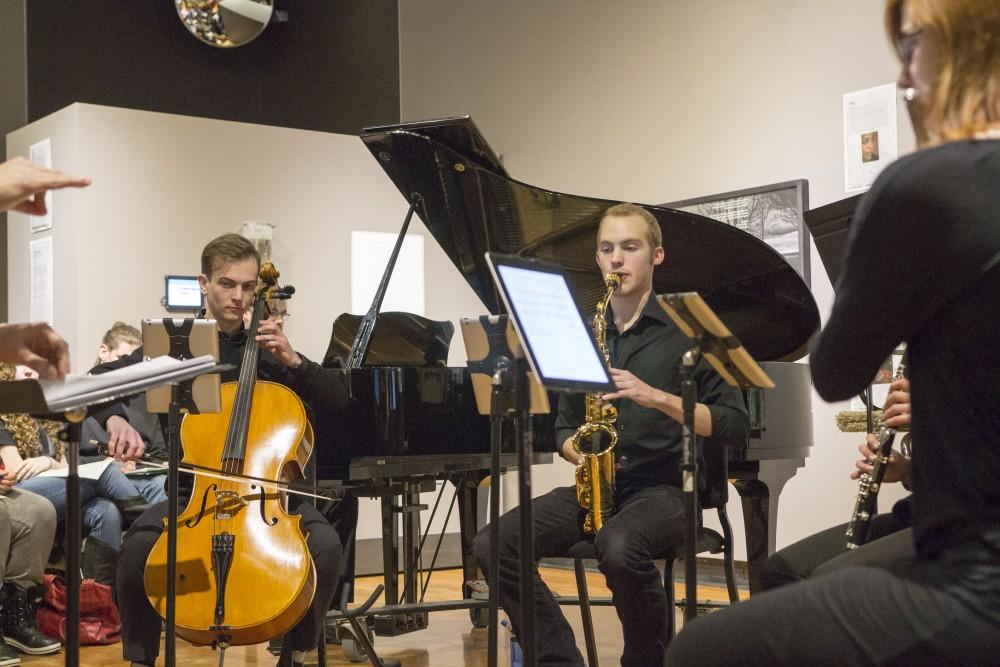 Taking images representing the Great Lakes and poems written in collaboration with those images, composers in this years’ Student Composition Competition at Grand Valley State University used their own unique interpretations to move this art into the medium of music.

Students from professor Bill Ryan’s composition studio entering the competition were asked to write 60-second pieces responding to projects in the “Great Lakes: Image and Word” exhibit in the art gallery of the Performing Arts Center. The exhibit shows the collaborative projects of 16 poets and artists designed on the implications of living within the influence of the Great Lakes.

“This was new this year, the composers usually just have a piece of art in some form, but there are words associated with all of these pieces,” Ryan said. “They are all collaborative pieces and that is something that the composers had to take into consideration.”

One of the five judges, Alexander Miller, said the judges were faced with a tough decision to narrow down which pieces to award the monetary prizes. He said there was a wide variety of good compositions to choose from.

“I thought the pieces were especially strong, just across the board in terms of their craftsmanship and orchestration,” Miller said. “They were all very interesting pieces in their own way.”

Ryan said the variety and experimentation in the composition responses resulted from the differences in each individual student’s response to the art and the poem.

“The students were not directed in how to respond. Obviously, it’s a very personal thing—response to art,” Ryan said. “Some of the pieces are literally speaking words, but there are others where you’re hearing the rhythm of the words translated into the pieces. Some studied these pieces in a very abstract way, maybe responding to the color. Others are set like they were a film soundtrack.”

The collaborative idea for “Great Lakes: Image and Word” was inspired by a class Patricia Clark, chair of the writing department, was teaching in the honors college with art professor Jill Eggers called How to Love the World.

In the class, students were asked to write poems and create paintings. Schroder was one student from their class.

“I was in (Clark and Eggers’) class so I spent plenty of time working in their mediums and having them critique me,” Schroeder said. “So I wanted to work in my medium in response to their work. Obviously the works were very emotional and their aspects of (each project) were particularly excellent.”

Schroeder wrote the piece “Canvas the Bear” in response to Eggers’ artwork “Moon Suite Paintings” which she made in collaboration with Jim Harrison’s poem “Moon Suite.” Schroeder said it was Eggers’ unique use of color and line that caught his eye.

“I think (“Moon Suite Paintings”) caught a lot of energy that other pieces didn’t necessarily strive for,” Schroeder said. “And even with the poetry (“Moon Suite”), it was energetic poetry. There was action. There was action in the painting. Which made it easier to respond to.”

Being that the poem was long and the painting was large, Schroeder said he chose one segment of the poetry and one of the paintings that he thought represent this segment of poetry to respond to with his composition. The segment from Harrison’s poem reads “The bear broke free from his constellation / and loped through the cosmos thinking / he scented a female in a distant world.”

“’Canvas the Bear’ started with this melody that I thought just got the energy of the painting and the poem right and then from there I started including these details,” Schroeder said. “There’s a part on the snare rim that’s the rhythm that you think of when you hear and animal galloping so that’s literally trying to be the bear running through the cosmos.”

Miller, principal oboist for the Grand Rapids Symphony and a composer himself, said that the unique energy in “Canvas the Bear” made it stand out to the judges.

“It was the one piece out of all of them that made everyone crack a smile at one point,” Miller said. “It was funny. It was jazzy. It was impeccably crafted all the way throughout and just because it uses humor or jazziness doesn’t mean that it’s a less serious composition.”

Taking a more melancholy tone, Schroeder’s composition “Threnody [3]” was written in response to Clark’s poem “Threnody” and Hoon Lee’s art piece “Threnody [2].” Meaning lament, “Threnody” tells the story of a girl drowning. Schroder said he decided to compose his piece in a way that told the story as well.

“The whole piece was so emotional,” Schroder said. “I tried to create a chronology of the poem in the piece that I was writing, where you have the actual action of drowning going on in the poem and then it goes to reflection. So really just trying to get into the imagery of that mostly.

“The two parts that started were one note repeating over and over on the piano and the cello, to ground the piece. And then there were chords in harmonic motion over top of it, mimicking how I think waves look. Then trying to get more of the feeling, so the chords were dissonant with the part that was going on underneath them. I was trying to get the motion of the piece. I tried to translate that into sound.”

Miller said this translation of sound made “Threnody [3]” his favorite piece from the competition.

“That was a much darker, more serious piece but still had a very, very clear musical direction,” Miller said. “Everything that came through, there wasn’t any question about what (Schroeder) wanted the listener to hear. So that’s simply great orchestration.”

Miller said that while this translation into sound provided inspiration for the pieces, that the winning pieces were chosen because they were able to stand alone as strong pieces of music.

“The point of inspiration for a piece of music can be important, but maybe it can be less important in terms of the listening experience,” Miller said. “They all need to be self-contained listening experiences. The composition shouldn’t need to make sense only when you see the painting. If you’re using it as a jumping off point for inspiration, (the music) should still work as a piece by itself.”

Schroder said the inspiration gave him a place to start and helped spark his creative process. He said he spent a significant amount of time studying the art and the poetry to base his composition on.

“The creative part (of composing), the sketching (of music) and the humming to yourself, it doesn’t always happen right away,” Schroder said. “Being given a concept jumpstarts that process. I think the collaboration makes the work more meaningful.”