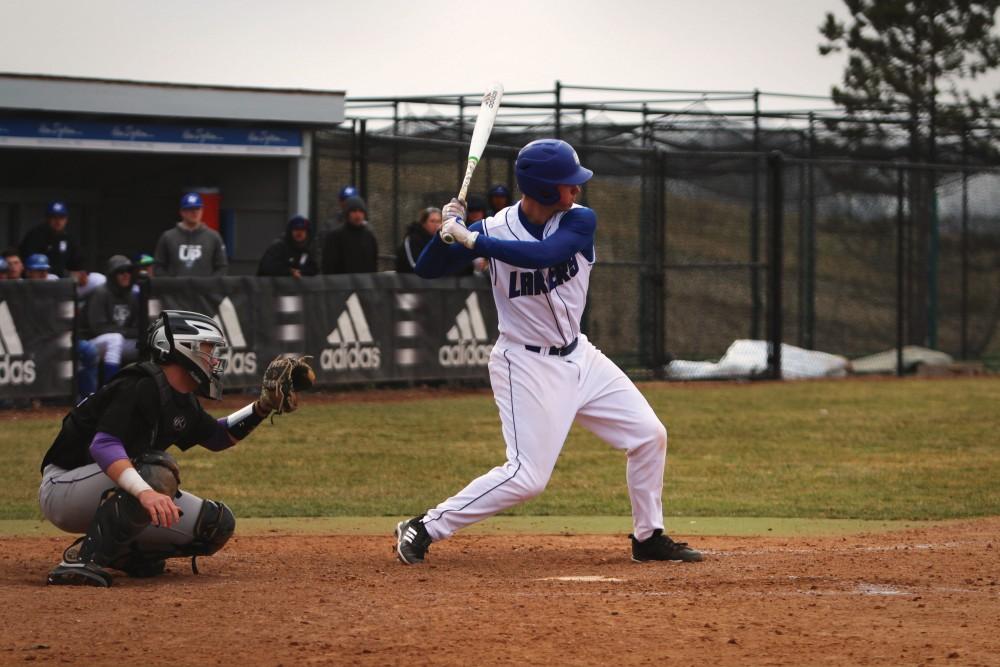 Ryan Blake-Jones steps up to bat at the game against Ashland on April 12th, 2018.  GVL / Sheila Babbitt

GVSU looks to continue that tradition when they open up their season against No. 23 Ohio Dominican and Truman State on Sunday, Feb. 24. GVSU ended last season with a record of 28-23, going 15-13 during conference play. GVSU’s season ended in 2018 with back to back loses during the first round of the GLIAC tournament.

“It’s certainly not where I wanted us to end the year,” said head coach Jamie Detillion. “I’ve been here for 17 seasons now and fifth place is not something I am used to.”

Detillion also said the struggles GVSU went through during stretches last year opened his eyes to some changes he needed to make in order to best set up the team for success out on the diamond.

Those changes include shuffling new players around positions in the infield where catcher, second base, shortstop and third base are up for grabs after last year’s starters graduated or transferred.

“Parker Murdie will be the guy we play at short to start,” Detillion said. “As for third base, Anthony Cocco is a left-handed hitter that we like with the ability to play third, so he will get the opportunity to start there at the beginning of the season.”

According to Detillion, the rest of GVSU’s position battles will be hard to sort out until the Lakers get to spend legitimate time playing and practicing outdoors, which can be a struggle at times when you are a college baseball team from the Midwest.

“It’s nothing that we aren’t used to, but it will take some time for us to figure out our other positions,” Detillion said. “We normally have played 30, 40 percent of our games before we have our first outdoor practices and that’s something that plays into figuring out our starting nine.”

Aside from position turnover in the infield, GVSU returns three out of their five best hitters from a year ago and the majority of their bullpen, which Detillion believes will be the strengths of the ball club as the season goes on.

“Jake Gleason and Ryan Blake-Jones provide a very solid one-two punch in the middle of our lineup,” Detillion said. “With them and guys like Murdie and Zach Berry, I think we will be seeing a lot of good production at the top of our lineup from these guys.”

Gleason hit .385 with a team high 10 home runs and .642 slugging percentage for the Lakers while Blake-Jones lead the team in batting average at .407 and runs batted in with 51 last season.

In the bullpen, the Lakers will slot junior transfer Christian Sidoti as their closer with converted pitcher Chase Carpenter and returning relievers Brett and Brendan Nearing serving as set-up men behind Sidoti.

“I think our bullpen is going to be our biggest strength this year, we have a lot of depth going into the season,” Detillion said. “Christian Sidoti brings good stuff and the right mentality to be our closer then we have a lot of guys like Chase Carpenter and the Nearing twins behind him to provide support as well.”