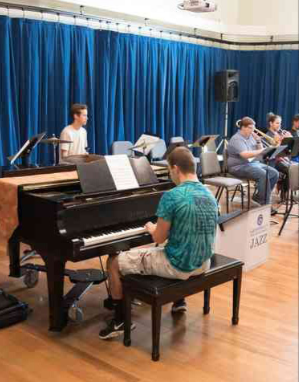 The Grand Valley State University Jazz Orchestra and Combos provided an energetic performance at their concert in the Louis Armstrong Theater. Tim Froncek and Michael Drost directed the free and open to the public concert on Tuesday, Feb. 25.

Two jazz combos, which are small ensembles of soloists, opened the concert, followed by the jazz orchestra performing a seven piece set. Along with the family, friends and community members in the audience, students in jazz history courses were encouraged to attend the concert and experience live jazz.

“Seeing it live and the interchange between performers on stage gives (audience members) more than if they were to just listen to the music or watch a video,” Froncek said.

“The Jazz Showcase” combo was the first to perform, opening with Charlie Parker’s “Yardbird Suite.” “In the Blue,” the longest combo to play together, followed the opening combo, performing “Some Day My Prince Will Come” and Jackie McLean’s tribute to Charlie Parker, “Bird Lives.”

The jazz orchestra’s set included a selection of songs featuring a variety of solos, including the clarinet, trumpet, trombone, drums and saxophone. Froncek said he chooses the songs played by the orchestra based on the students in the program each semester. He also said he likes to include some popular jazz songs which people might recognize. For instance, one of the last pieces played was “Cantaloupe Island,” a popular piece composed by Herbie Hancock.

“It allows the audience to feel like they can relax a little bit,” Froncek said.

Froncek said he hopes that once the audience sees him having fun and dancing on stage, they are able to loosen up and have a good time as well.

“When the director has that much energy, it makes you more motivated to put that energy into your playing,” Fisher said.

Last semester, Fisher was the only girl in the jazz orchestra. Now one of three girls, she expressed her excitement of having more women in the orchestra alongside her. Froncek said he was enthused to see more female musicians join the jazz orchestra, since jazz is typically a male-dominated field.  He said he hopes the presence of female jazz musicians in orchestras continues to be normalized.

Fisher said she does not let being in the minority discourage her, adding, “I’m the one who can show that girls can play jazz too, and it’s not just something that is male-dominated.”

The Jazz Orchestra holds two concerts on campus each semester. Froncek said he is in the process of planning and arranging the set list for their April 14 concert. They will also be taking their talent off-campus in April to perform in downtown Grand Rapids at Founders Brewing Company.

“I am looking forward to keeping the momentum going,” Froncek said.