Convocation to welcome class of 2020 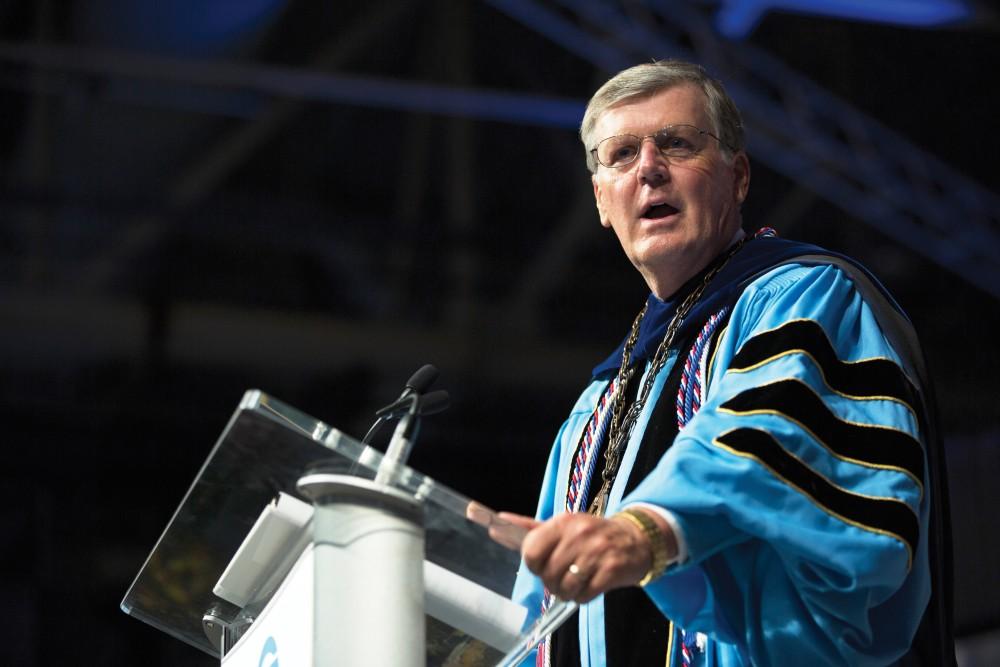 As summer comes to a close and students trade in their beach bags for backpacks, there are many Laker welcome events happening around Grand Valley State University’s campuses.

GVSU will officially begin the 2016-17 academic year with the annual convocation ceremony to be held on Friday, Aug. 26 located in the Fieldhouse Arena. The ceremony will take place at 11:30 a.m. and will mark the start of a new journey for many new students.

The convocation ceremony is a GVSU tradition preparing new attendees as well as returning students, staff and faculty, and is celebrated every year since the institution’s inception. Around 6,000 people are expected to attend this year’s event.

LeaAnn Tibbe, associate director of the Office of Student Life, works alongside many large scale events around campus and knows her way around this year’s convocation ceremony.

“It’s a chance for the university to gather together and celebrate the upcoming year,” Tibbe said. “There will be speakers, music, and videos. It’s an exciting time.”

Music will be featured intermittently through the ceremony as well. The GVSU choral ensembles will welcome students with performances of some classic GVSU ceremony songs, and there will be a special performance of “The Impossible Dream.”

This formal opening ceremony was chosen to parallel students’ experience at commencement when they graduate. Tibbe called the two ceremonies “bookends to the college experience.”

“It’s great for students to be able to reflect back and look at how their college experience began and ended,” Tibbe said. “They began at GVSU with a formal ceremony, and conclude with commencement, which has a similar feel with the faculty in their robes and formal music playing.”

Tibbe also described the event as being “bittersweet,” as it means the end of the summer but also the beginning of a new journey forward.

Haas is also looking forward to welcoming everyone to campus this year. He said he enjoys watching the campus brighten with anticipation as students return from the summer and the band begins to play again.

“Convocation is a rite of passage in many regards,” Haas said. “It is for new students coming to campus for the first time as well as for returning students, staff and faculty for the academic year ahead.”

Haas will be speaking about looking forward to this year and years ahead, and the transition from summer to a new academic year. Additionally, Hass said he is thrilled with the “Laker effect” message and that will be an ongoing theme throughout the convocation ceremony.

“It demonstrates to new students that they’re joining a special place at GVSU, they can see alumni in their communities and careers making a difference with the foundation that they found here,” Haas said. “The Laker effect is all about commitment to each other and to the communities where we serve.”

There will be additional opportunities throughout the week prior to the convocation ceremony on and around GVSU’s campus during the transition from summer to the school year.

On Aug. 25, the class of 2020 will join together for a group photo at Lubbers Stadium. This will be followed by the Laker Fan Fest which will include “freebies” and meetings with Laker football players.

As a last hurrah Thursday night, the Standale Meijer will host a Meijer Madness event with music and giveaways.

For more about this year’s transitions events and the convocation ceremony, visit www.gvsu.edu/transitions.