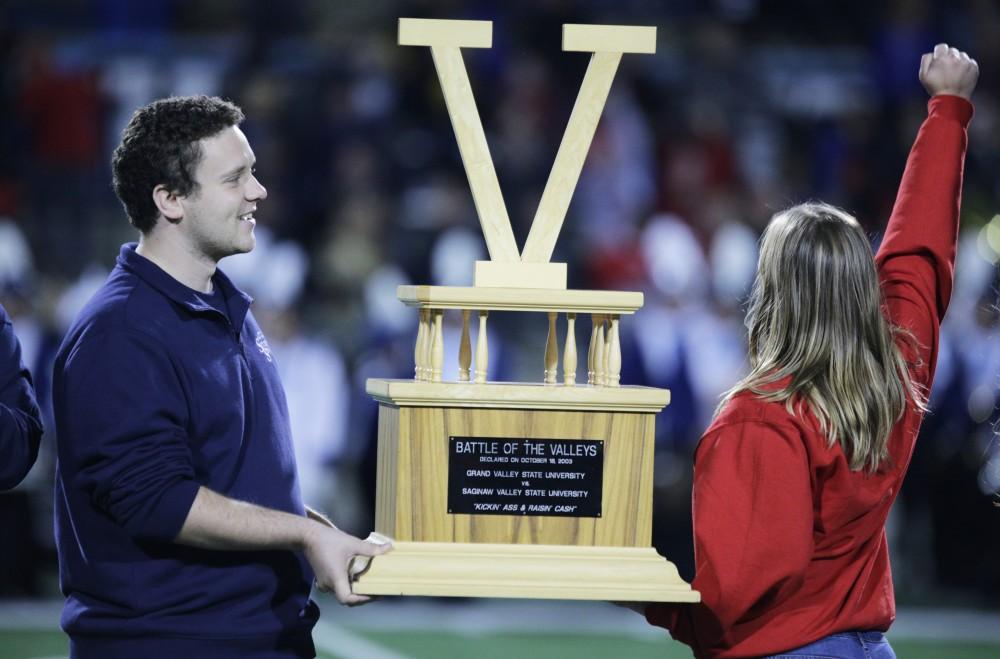 The vote concluded a three-week-long discussion of whether or not to keep Battle of the Valleys going. The senators had been debating keeping it for the sake of having a week devoted to charity or finding another charity to promote, as some senators believe most students are unaware that Battle of the Valleys is more than just a football game.

Golnick spoke on behalf of keeping the competition. Her reminder of GVSU’s contribution to the Laker Children’s Fund, the main beneficiary of the competition, ultimately swayed voters. Once the list of speakers was exhausted, 26 students voted in favor of keeping Battle of the Valleys, while 12 voted against it and one abstained.

“We’re going to keep doing it, so I think that’s exciting,” said student senate president Jonathan Bowman. “We are going to work towards planning (it), and if people want to get involved in that process, I encourage them to reach out to us.”

As part of its weekly business, student senate also addressed its finance guidelines, which is the control of the $1.2 million Student Life Fund and how the senators plan to disperse it to student organizations for the 2018-19 academic year. After the budget is reviewed, the organization’s requests are divided into certain categories.

“I think the huge thing for people to know is about the budget,” Bowman said. “I think the students need to know where the (fund) is going, if they have comments, questions, concerns, (to) reach out to us so we can address those. (We want to) help people better understand that money is there for students to use, and we spend the whole year dispersing that fund to students. It’s there for organizations to request it however they deem fit.”

Student senate also invited Chris Swank, an operations manager for Pew Campus and Regional Centers Operations, who discussed the construction of the Laker Line, a brand-new busing initiative to be finished in fall 2020. The plans are meant to improve the pace and ease of the bus drop-off and pickup at the Kirkhof Center.

The Pew Campus bus stop will also be receiving an upgrade in order to prevent students from “playing Frogger” on the street whiel trying to catch buses. Swank said the new buses will be able to hold 60 students. The senators erupted in excited snaps when he mentioned Wi-Fi would also be available on the buses.

“The resolution is showing support for two House bills that are currently at the Michigan Legislature, and we show support for action being taken in regard to gun violence,” Bowman said. “Student senate isn’t a political body, so we don’t make the statements on issues like ‘yes’ or ‘no.’ It’s more of a discussion and bringing up concerns with students.”

One GVSU student who has been attending the senate’s regular meetings was pleased with the progress the senate has been making on improving issues across campus.

“I think they went over a lot of things, and they (were able) to go in depth on a lot of (issues),” said student Shelby Vincke. “I noticed (the difference when I) was here for their first talk about Battle of the Valleys, (but it’s good to hear) everyone is still super passionate about (it). I think they’re getting somewhere.”