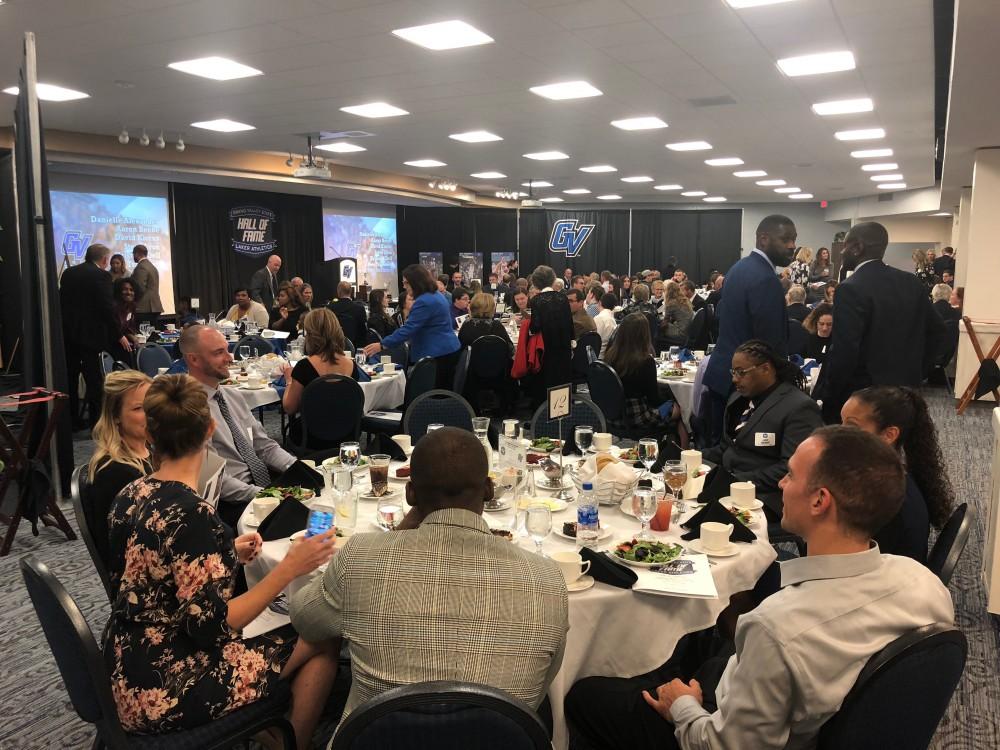 As Grand Valley State University President Thomas J. Haas put it, “We compete against some of the best and we win.”

He’s got a point. 20 consecutive GLIAC Cups. 17 consecutive DII National Directors Cup top-two finishes. When it comes to athletics at GVSU, the statistics are often gaudy, but gaudy stats come with the territory.

Once everyone had finished their entrée and dessert, GV athletic director Keri Becker opened up the ceremony by making note of how every induction class is special, but this class was even more so than usual. Included in this class were some of the most successful Lakers, in regards to team success.

Danielle (Alexander) McGuckin, representing the women’s volleyball program, was a two-time first-team all-American at GVSU and helped the Laker women earn their first national championship over a previously undefeated Nebraska-Kearney squad in 2005.

Aaron Beebe, representing the men’s swimming program, is the most decorated male swimmer in the history of GVSU. Out of 28 opportunities to do so, Beebe earned 26 all-American plaudits.

Crystal Zick, a point guard on the women’s basketball team from 2004 to 2008, is the all time leader in assists in program history and hit the game-clinching three-pointer in the 2006 national title game.

The rest of the inductees follow the same trend. Former head baseball coach Steve Lyon was 552-205 at the helm of the men’s baseball program. Krista O’Dell earned ten all-American plaudits in track and cross-country. Pete Trammell, a combo guard/forward on the men’s basketball team from 2005 to 2009, won two Midwest regional titles and finished his career with a 113-20 record.

As aforementioned like much of his fellow hall of fame inductees, Trammell was no stranger to success while at GVSU. During his junior season where Grand Valley State tied a DII record with 36 wins, Trammell earned all-GLIAC and all-GLIAC Defensive honors while averaging double digits in points per game (10.2) and 40.8 percent from beyond the three-point stripe.

In an interview after the induction ceremony, Trammell was asked what allowed his teams to be successful during his playing days; Trammell didn’t hesitate with his reply.

During that 36-win campaign, the Lakers held opponents to 54.3 points per game on 36.3 percent shooting while also forcing nearly 16 turnovers per game.

When asked what advice he would give to athletes coming through GVSU in the future, Trammell felt it is all about your mental approach to sports.

“My advice would be to have the right mindset,” Trammell said. “Some guys want to come in and score points, they want to do this and that and think about their professional aspirations. But if you come in with a winning mindset, in terms of trying to be the best, I think you will be successful.”

Before the Induction ceremony, Paul Leidig, a professor in the GVSU Computing and Information Systems program, presented the Amway Grand Athlete of the Year award to GVSU’s highest performing female and male athletes. Gabriella Mencotti, a former two-time DII National Player of the Year for the women’s soccer program, and Collin Schlosser, a former two-time academic all-American and team leader in tackles at linebacker for the football team, were given the awards.

The Hall of Fame inductees were honored a second time during halftime of the Lakers Homecoming football game against Dixie State on Saturday, Oct. 6.