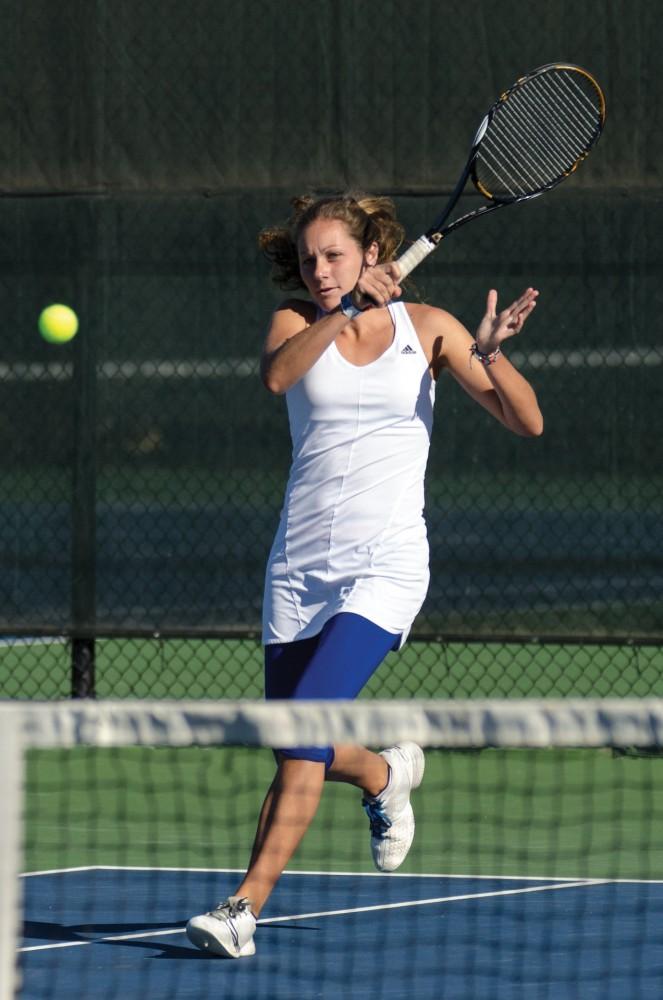 GVL/Bo Anderson Lexi Rice returns the ball across the net to Walsh.

The Grand Valley State University women’s tennis team took care of business on the road over the weekend in Lima, Ohio. GVSU beat the University of Northwestern Ohio 7-2 before switching states to Indiana, where the Lakers took to the courts ready to go in the second match versus undefeated Indiana Wesleyan University (16-0) of the NAIA.

“We didn’t want to let them intimidate us,” junior Kelly Trapp said. “We knew what we had to do to win.”

The group has consistently brought in doubles victories so far this spring. In fact, six members of the women’s team have 18 or more victories in doubles this year.

To match some of the success the Lakers have had in doubles, the team as a whole is raking in about 75 percent of their individual match-ups, as well.

Every member of the team has a winning record.

“We have a very deep team where there’s not that much difference between No. 1 and No. 8,” head coach John Black said. “The players in the middle and bottom of the lineup are doing extremely well, but the players at the top are playing tough, too.”

Orna, a transfer student from William Carey University (Miss.), has been a nice edition to the collection of talent. Trapp and Orna are leading the way with 22 and 20 wins respectively while only losing two matches each.

The team appears to be rolling without any sort of resistance through the last leg of the season. After dropping a match 6-3 to Nova Southeastern University during the spring break trip, the Lakers have put together an impressive four-match win streak, beating their opponents rather easily (9-0, 8-1, 7-2 and 9-0).

Trapp has been shining as an upperclassman, and the numbers can attest to it. After coincidentally notching 11-1 records individually and 5-1 records in doubles in both of her first two seasons, Trapp has a 22-2 record in singles – winning 10 straight – and a doubles overall record of 10-2.

“Kelly’s doing extremely well this season,” Black said. “She’s undefeated in dual matches, and her and Kristina (Lucas) have been playing great doubles.”

Senior Niki Shipman is third in individual wins this season with a 19-6 record — her highest total since her freshman season when she had a 22-9 record and earned First-Team All-GLIAC honors.

GVSU is situated in the fourth spot in the GLIAC with a 19-5 record overall with just a few matches remaining before the Midwest Regionals begin May 3.

“We have a couple of nationally-ranked teams coming up in April, and we want to get ready for that and just keep working hard in practice to hopefully prepare ourselves for the regional in May,” Black said.

The Lakers will have plenty of downtime to prep and make any necessary adjustment before their next match, which won’t be until April 10 when they travel to Holland to face off against Hope College.

The Laker men split their matches Saturday. The team recorded a win at IWU 7-2 but lost 4-5 at UNOH in the second match of the day.

Despite the tough loss, GVSU was able to get the experience of playing in a close match.

“That wasn’t the hardest team we are going to play and, at conferences, we’re going to have to expect that kind of intensity and that type of competition,” freshman Billy Heckman said.

Heckman picked up a victory on the road over the weekend — beating UNOH Emin Alpan 6-0, 7-5 — and has advanced his overall record in singles to 18-6.

Heckman also picked up a win in doubles competition on Saturday while paired with senior Andrew Darrell.

“We’re playing really strong doubles, and we need to keep working on that,” Black said. “Really what we’re looking for is just some tough competition to be more prepared. The teams that are best in doubles and that are a little bit more prepared are going to be winning conference and making NCAA regionals.”

The GVSU men’s tennis team is now 10-3 on the season and 2-1 in the GLIAC, and it sits in third currently in the conference standings.

Coming back from the road trip, the boys in blue will return to action Wednesday at noon to face a Michigan foe in Aquinas before traveling to take on conference leader Michigan Technological University (8-2) March 22 and Lake Superior State (9-7) March 23.

LSSU is a team quickly coming up in GVSU’s rear-view mirror, sitting in fourth in the GLIAC after winning seven straight matches.

“We have to stay mentally tough throughout the rest of this season,” Heckman said. “I think we have a good shot at winning our conference tournament.”