Ottawa County Board of Commissioners hosts “historic” meeting at GV 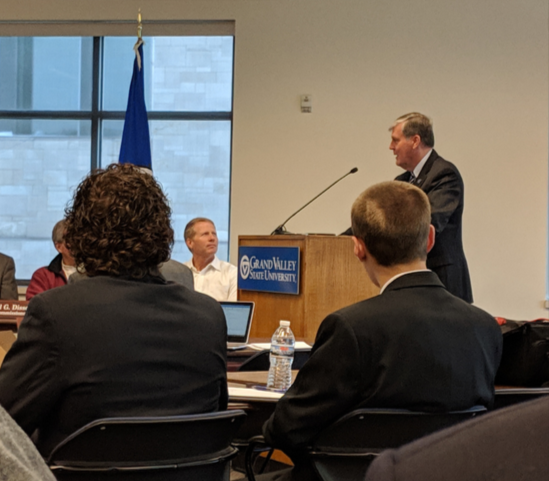 The Ottawa County Board of Commissioners held its November meeting in the Kirkhof Center’s Pere Marquette Room on Thursday, Nov. 15. Ottawa County Chairperson Gregory DeJong said that the meeting was the first time that the board had reached out to Grand Valley State University in hopes of collaboration, making the meeting a historic one.

Not only were all 11 commissioners present at the meeting, but the room — which included an expanded audience section — was nearly filled with members of GVSU’s Student Senate, staff and faculty, as well as various elected officials and county residents.

“The most important thing is that the Student Senate was here, and our Student Senate leadership is awesome,” DeJong said. “Meeting with those folks, (it’s) having a cup of coffee and saying, ‘what can we do to build relationships’ so that we can put faces and names together.”

The meeting was organized via communication between DeJong and Student Senate President Rachel Jenkin, who watched the meeting beside other members of Student Senate in the audience. A regularly-scheduled Student Senate meeting followed the board’s meeting, where Jenkin addressed the senators and cited the collaboration as the first step in an ongoing conversation.

“Hopefully this is something that isn’t just a one-time thing,” Jenkin said. “We can build upon that relationship… The county that we’re in (dictates) the people who we have the potential to work with, and that same energy (is something) we can really mimic to make the community a better place.”

The content of the Board of Commissioner’s meeting included the passage of seven different motions previously discussed by members on prior occasions. Following the formalities of voting, the meeting turned to guest speakers, beginning with GVSU President Thomas Haas.

Haas cited GVSU’s pride and contributions to the tri-country area, noting that half of its graduates live in west Michigan. He also noted that between students and auxiliary functions, GVSU has provided nearly 900 million dollars each year in economic development.

Haas concluded his speech thanking the board for their representation and leadership within the county.

“I know that you all raised your hands in support of the Constitution of the State of Michigan, but also your responsibilities as neighbors and leaders here for our great part of this state,” Haas said. “You all are really ensuring that we have the structures in place to conduct our businesses, conduct our lives in a very productive manner. And you also provide the quality of life that we have here at the university here as well.”

The speech was followed by a presentation from Administrator’s Office Intern Rutendo Goto, who is also a political science graduate student at GVSU. She discussed her work in the office and her reworking of its sustainability plan in accordance with its Strategic Plan.

Other speakers included Planning and Performance Improvement Director Paul Sachs, who provided an update on the area’s groundwater. His presentation discussed issues regarding the draining of underground reservoirs through wells, which aren’t replenished due to an impermeable clay membrane. Sachs answered public questions on possible solutions, saying that many solutions need to be carefully vetted to avoid water contamination

Parks and Recreation Director John Scholtz reported on an update within his department, which included an overview of the county’s parks. He primarily discussed upcoming additions to the county’s trail system, which will connect many of their properties.

Guest speakers concluded with a presentation from Sherriff Steve Kempker and Undersherriff Valerie Weiss, who discussed the department’s role in Allendale. Kempker noted that while Ottawa County is one of the fastest growing counties in the state, Allendale is one of the fasted growing communities in the region. As part of that growth, the department supports the Grand Valley Police Department, who Kempker said “has been an absolutely great partner to work with.”

“As that growth started to develop, we realized at that time we were struggling to provide the services and adequately respond to calls in this area, and that’s when Allendale Township really stepped up to the plate,” Kempker said. “The township realized that with the growth, the increased calls for service was needed.”

Following guest speakers and a report from the County Administrator Alan Vanderberg, the board closed the meeting and moved to mingle with the audience. Many shifted to another room for light refreshments and discussion with members of Student Senate before their meeting.

Haas said to the board that the meeting embodied strong relationship between the university and the county.

“I know that there were choices to be made (in choosing where to settle GVSU), but at the end of the day, we have reaped the benefits of the leadership through the years of the commission (and) the commissioners, and I know that it will be that way for years to come,” Haas said. “We are your university and we are very, very proud of that.”