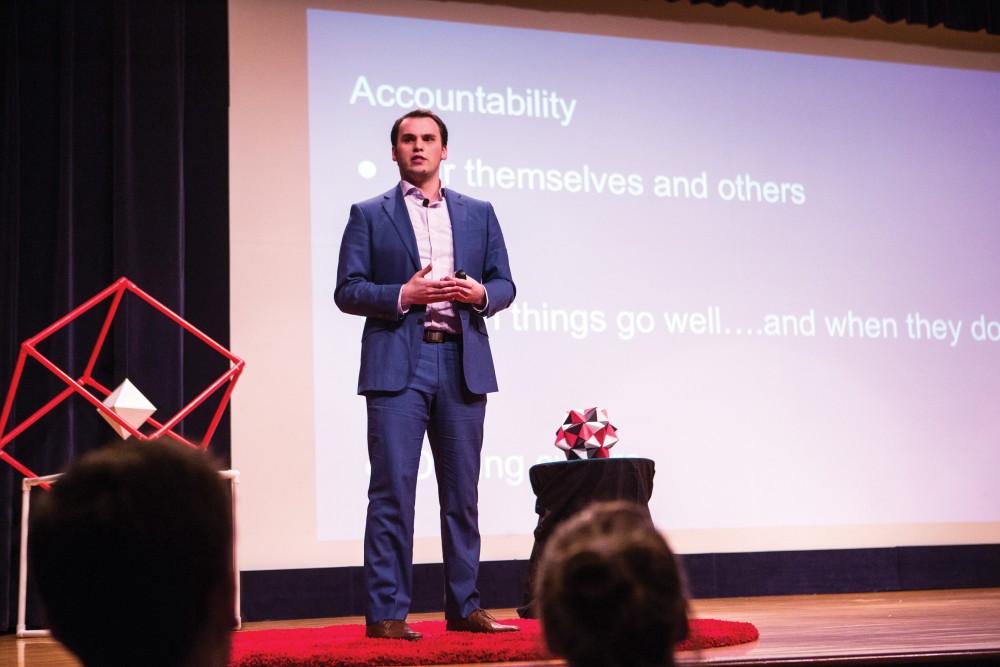 The DeVos Center Loosemore Auditorium was packed with intelligent energy Friday, March 16, for TEDxGVSU’s independently organized TEDx event, which gave Grand Rapids employees and GVSU professors and graduates a chance to share their ideas worth spreading.

The night’s theme was “Shape.” Talks were broken into topics regarding impressions, identity and impact to pose the questions, “What impressions have your experiences left you with? How have they shaped you? What shape does your identity hold? How can you impact and shape society?”

Among those challenging the audience to explore impressions were GVSU math professor Robert Talbert, author and speaker Thad Cummings, and teacher and stand-up comedian Catye Palomino.

Cummings discussed how today’s society does not measure your success by your level of happiness. Instead, success is defined based on the size of your house, the car parked in your driveway or the amount of money you make working.

“The American lifestyle comes with a fair amount of societal pressure and performance stress that says if you are not growing, building or achieving, you are in fact failing, lazy or incompetent,” Cummings said.

Cummings’ own success story began in college after he got lucky with his business. He rode the high as his multiplying businesses grew to secure him his own nonprofit, social programs, a six-figure income and a seven-figure net worth. But by 2016, it was gone. Yet, his joy was much greater in this low than when he had it all.

“What if the goal was to laugh more and have a bit less stress?” Cummings said. “To worry about ourselves a bit less and to care for others more? What if we took time to engage the interconnectedness of our communities, not the monopolistic agendas of our own pride and egos?”

Palomino’s struggle with boredom in school inspired her to teach. After years of getting students interested by being interesting, she found herself labeled as a veteran teacher, and her passion was lost. She spoke of being fully present, being able to live in the moment.

“All of us at some point get in a rut,” Palomino said. “It’s easy to get caught up in the work part of our jobs instead of the joy of the actual career. Sometimes we have to be dramatic of reminding ourselves of those things, but it takes an effort. You can’t just assume you’re going to be passionate about something for 25 or 30 years.

“You have to have an ‘aha!’ kind of moment (to) figure out what it is that brought you to (the) career in the first place.”

“Choose a career you are passionate about, not just a job,” Palomino said. “There’s a difference. In choosing something you feel strongly about, it might not pay you a lot, it might not be easy to accomplish, but if that’s what you want to do, do (it).

“Don’t just settle for something because it’s easy, because that will quickly feel like a job. When it does feel like a job, that’s when you know it’s a red flag.”

Perdue challenged the audience members to embrace their fluid selves and be open to change. She reminisced about her time as a college student when she made the executive decision to be a career woman, and not a family woman, as her mother had given up her dream of being a scientist to support her family. She considered this decision final and a part of her identity.

However, Perdue believes that identity can be fluid.

“Who we are right now might not be the person we need to be in our next opportunity or the next phase of our lives,” Perdue said. “Happiness is a moving target. What fulfills us and makes life worth living can, should and will change, and we must be ready to welcome it. We forget we have the freedom to be fluid.”

Finally, the audience was asked to consider the impact they have by co-founder of Watershed company Mike Schuler, GVSU graduate and third-grade teacher Sarah Park and nutritionist Jody Vogelzang.

This event was the second TEDxGVSU talk to be held at the university, following an event in 2017.