The Letter Project gives women opportunity to empower with words 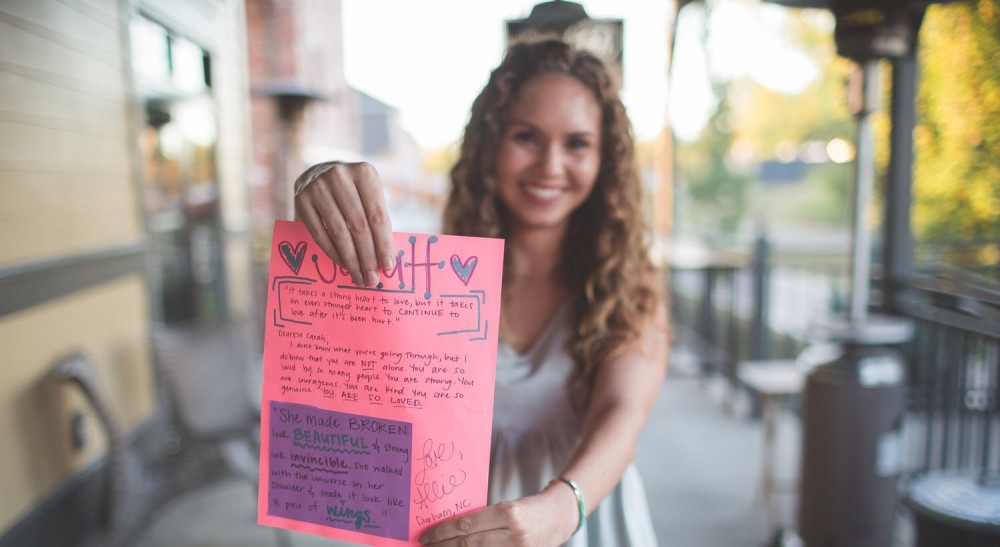 Words have the ability to empower. To spread this empowerment, a nonprofit organization called The Letter Project connects writers with struggling individuals to send uplifting letters around the globe.

Simply put, The Letter Project consists of women writing letters to girls around the world who need extra inspiration. They believe that no problem is too big or too small to receive a little bit of handwritten encouragement. The Letter Project is currently searching for a courier on Grand Valley State University’s campuses to spread these positive messages.

Through an online form, requests are made for letters of encouragement and support. Anyone can fill out a form for themselves, explaining their struggles and asking for personal encouragement, or they can nominate a friend, sibling, classmate, coworker, parent or child to receive a surprise stack of letters addressed directly to their mailbox.

Whitney Saxon, founder of The Letter Project, was inspired through her own experiences and struggles to start this organization. Saxon was born in Indiana and raised in the Midwest and then spent the good part of her 20s in Atlanta doing business communications for a large corporation. But this season of her life wasn’t easy.

“My 20s were harder than I expected them to be,” Saxon said. “And I looked at my friends and realized we were all in the same boat of trying to figure out what we want to do. Dating is messy, moving to new cities and trying to get our bearings. … I just felt really passionate about helping women navigate their 20s.”

This recognition that being 20 is difficult motivated Saxon to start a blog where she wrote pieces of encouragement with honesty on being a 20-year-old and exploring the challenges and opportunities that come at that age. This desire to uplift other struggling 20-somethings grew from just a blog to a life-coaching business for young women and finally led to the inspiration for The Letter Project.

Any girl age 5 to 30 can receive letters, and any circumstance or struggle is worthy of a submission. Problems could be a breakup or divorce, unemployment or difficulty choosing a college major, or simply needing to connect with someone in a friendly way.

Upon receiving the submission, a team of voluntary writers is assigned to that girl, and they are given one week to write her a personalized, handwritten, decorated note. These letters are then sent to headquarters where they are sorted, approved and delivered in one bundle to the recipient.

The Letter Project grew faster than Saxon could have anticipated. Over the course of a few years, it expanded into a network of more than 1,200 writers sending letters to girls globally, with four different continents represented. The Letter Project is now a 501(c)(3) organization, and Saxon quit her job to commit her full attention to the cause.

“The fact that The Letter Project is growing and at capacity doesn’t say anything about me or the organization itself,” she said. “It just goes to show how much of a desire and a need there is for this. I’m not going to say I’m changing lives, but the impact that these letters are having is undeniable.”

Aside from the receivers, Saxon also created the organization to give women who aren’t struggling an opportunity to lift up others. The Letter Project is just as much for the writers as it is for the receivers, and they are always accepting more volunteers. Women interested in joining this team of letter-writing influencers should visit www.toloveourselves.com to apply and find more information.

Additionally, in an effort to increase the outreach to college communities, The Letter Project has campus couriers who represent the organization at their university by hosting group write nights and spreading awareness for the cause. GVSU is still in need of a campus courier, and anyone interested in taking on this opportunity should contact Saxon at [email protected]