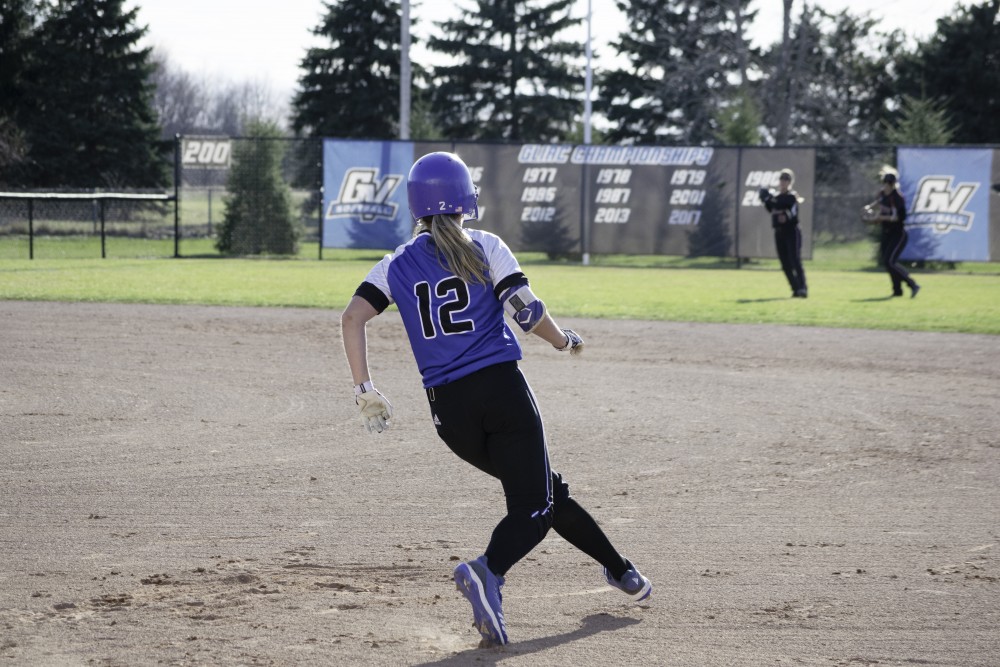 Grand Valley State took on three doubleheaders this week against both the Davenport Panthers and the Purdue Northwest Pride on April 9, 10 and 13. The Lakers were able to tally three more conference wins.

The Lakers played the Panthers in a doubleheader played at home to start off the week on Tuesday. GVSU brought home two conference wins that day, the first game ending with a score of 9-4 and second game ending 5-4.

The Lakers were off to a quick start against the Panthers in the first game. They led Davenport by six runs until scoring another two more runs in the bottom of the fourth inning, making the score a whopping 9-1. Davenport would add two more runs in the top of the fifth inning and another to finish the game in the seventh inning.

GVSU continued on in the second game, leading 1-0 in the first inning before Taylor Rierger hit a two-run home run in the second – her fourth of the season.

“I actually do not look at my stats throughout the season,” Reiger said “I just try to do my best for the team every game, do my role, complete my role and help my team.”

The Panthers answered with their first run of the second game before GVSU retaliated with two more, making the score 5-1 until the beginning of the seventh.

Davenport refused to quit, as they scored four runs in the seventh tying the score up 5-5. However, the suspense didn’t last long, as the Lakers were able to get a hit and send Brooke Henning to score and break the tie, ending the game at 6-4.

The softball team then continued their success against the Purdue Northwest Pride. The Lakers split the Wednesday doubleheader with a win from the first game 12-3 and their first loss of the week in the second game 7-6.

During the seventh inning of the first game, the team scored seven runs off of seven hits, one of which was a home run from Kaitlyn Plocinski who also knocked in Nikoma Holmen and Lydia Goble to finish the game.

The Lakers had a quick start in the second game, thanks to Holmen hitting a two-run homer in the top of the first inning.

The game started to take a turn during the third inning where Purdue Northwest would tie the game 4-4, and in the fourth inning move to take a 7-4 lead. GVSU tried to comeback in the fifth and sixth inning, scoring a run in each, but their efforts did not prevail as they were unable to score in the seventh.

The final score of the game would end at 7-6, with the Lakers at the wrong end of it. Head coach Dana Callihan doesn’t let the loss from this unpredictable sport get under her skin.

“That’s the thing about this crazy sport,” Callihan said. “We played well for the most part, we had one or two mistakes that bit us. Purdue Northwest is a solid team and they got us.”

GVSU took on Davenport once again on Saturday, April 13, this time in Caledonia, Mich. This is where the Lakers would collect two more losses in the doubleheader, making them 29-7 and 13-5 in the GLIAC.

The Panthers had an early lead in the first game racking up six runs in the first three innings, while GVSU didn’t earn their first run until the third. The Lakers fought for a comeback in the fifth inning when Taylor Rieger hit a two-run homer and Bailey Thatcher hit another in the sixth, but the Lakers lost 6-5.

The Panthers scoring continued through the second game, including three runs in the fifth and sixth. The Lakers were able to gain two more runs in the sixth and another in the seventh, but that was not enough to overtake the Panther’s lead. That game finished with a score of 7-6.

Even with the three losses on the week, Callihan is still enthusiastic and hopeful.

“We are happy where our team stands right now,” Callihan said. “We play in a tough conference and everyone is out to get us, we just need to focus on playing our game pitch after pitch.”

That Lakers continue play on Tuesday, April 16, in a doubleheader against the Wayne State Warriors.