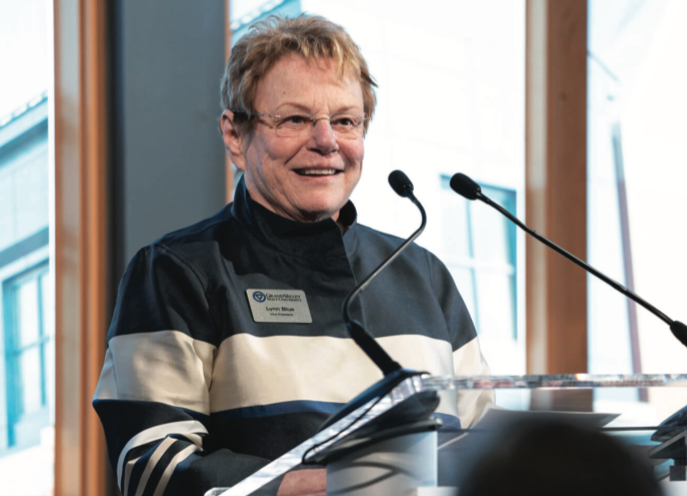 Vice President for Enrollment Development Lynn “Chick” Blue received praise for working 50 years at Grand Valley State University during her building naming ceremony on April 9. Held at the newly-named Blue Connection, the celebration focused on her longtime service to students.

“We’re a college,” Blue said. “We want students to come here to grow, so they are number one.”

Reflecting on her career, Blue explained she came to the university by accident, thinking she would have a temporary job. However, working with students inspired her to stay long-term. Blue said the students make GVSU because they graduate and perform brilliant achievements. Subsequently, alumni tell the university about their accomplishments.

“If you sit down and think about it, you know, and think back to that first day that I drove on campus, it is startling,” Blue said.

In his opening remarks, GVSU President Thomas J. Haas highlighted how the university appeared different in 1968, the year Blue commenced work here as a clerk-typist. Back then, cornfields and mud surrounded the college. Even technology differed, since he prompted the audience into laughter upon asking students if they know what a typewriter is.

Haas pointed out how much GVSU has changed. Manual typewriters shifted to electronic typewriters until computers eventually took their place. In addition, the president outlined the university’s physical development, going from mud to asphalt and buildings. He mentioned the Blue Connection formerly served as a parking lot in 2009.

However, Blue explained students who lived in Allendale’s south campus had the Kirkhof Center as their closest eatery. She recognized the need for a landmark building, a place where students could hang out. Therefore, Blue proposed the Connection as a link between north and south campus.

Open since 2010, the Blue Connection offers more than food. Senior Diamond Johnson mentioned visiting the building to eat and connect with students. When faced with group projects, she and her classmates review their work there. In the process, Johnson emphasized they connect with each other, ensuring collaborative assignments are completed on time.

As Vice President for Enrollment Development, Blue’s challenges include determining how to fill classrooms and recruit students. The VP seeks quality students to take courses, going as far to give them “the nudge.”

She explained this strategy consists of two parts. First, know how someone wants to connect with the institution. Second, be in favor of the person, showing concern without being self-centered.

“(Blue) is just a big inspiration,” Johnson said. “She really helped me and guides me through my studies and things like that.”

Johnson noted she emails Blue with concerns about classes and meets her during office hours. By discussing with Johnson on situations, Blue directs her to on-campus resources for help. Given the connections the vice president establishes with students, Johnson said her mentor deserved to be honored at the naming ceremony.

Enrollment development counselor V’Lecea Hunter said, “(Blue) pushes the students to go beyond their own limits or beyond what they think that they’re capable of doing.”

Hunter said she once felt comfortable with obtaining a bachelor’s degree, but Blue encouraged her to strive higher. Even earning a master’s degree proved insufficient since Hunter experienced a nudge to pursue an additional degree.

Overall, Blue taught her that education does not end with one goal. It continues through all goals students have. Hunter said she hopes to become the next dean of students.

Blue thought it was a good coincidence that her last name equals GVSU’s main school color. The vice president mentioned some people want buildings named after black and white to match — having all three colors present within facilities’ names would form a full cadre, Blue said.

As for her future, she intends on continuing her work beyond 50 years of service.