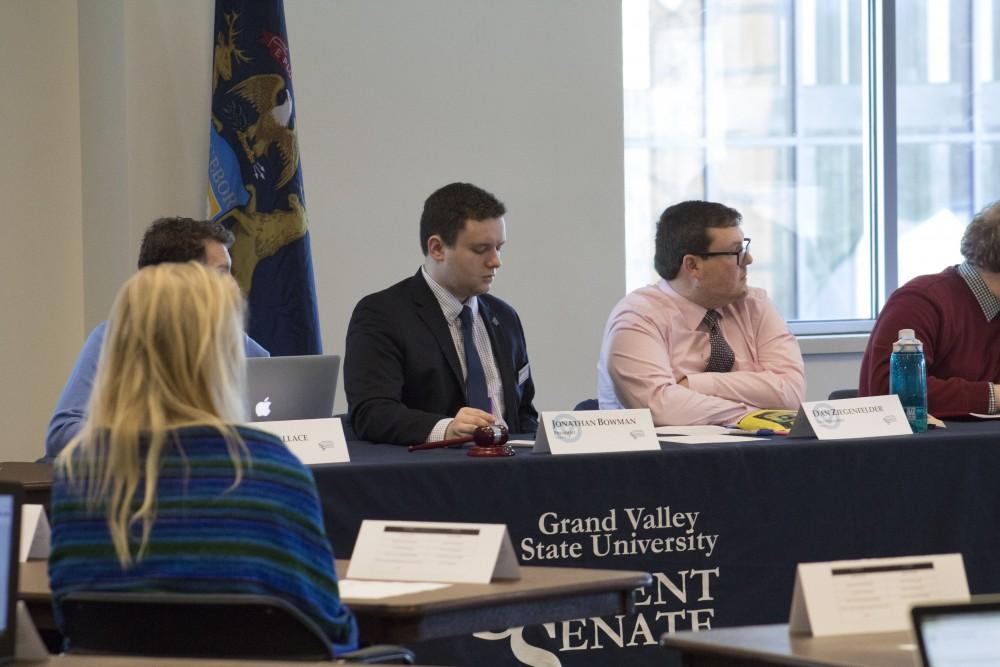 Fifty-three Grand Valley State University students are running in the student senate election this year. Voting will be conducted online at www.gvsu.edu/studentsenate, and students may vote for up to 10 candidates of their choice from Monday, March 26, at 8 a.m. to Monday, April 1, at 11:59 p.m.

The individuals elected to be on student senate are chosen to represent the student body, but the voting process does not stop there. After being sworn in by the new president, students then have the option to run for a higher position if nominated, or they can choose a committee to serve on within the senate.

Candidates for the election can be found campaigning in dining halls, in classrooms and at campus events. But before they approach anyone about counting on their vote, students must turn in an election packet. This contains 100 signatures from their peers, two faculty endorsements and a complete OrgSync bio form. They must also have their photo taken.

With a change in representatives every year, senate vice president Dan Ziegenfelder said his first year on senate was vastly different from his time now. He hopes the diverse trend continues, giving them the opportunity to address new concerns for the university.

“I think it provides a different atmosphere each year,” Ziegenfelder said. “Those 50 seats (notice) things each year they want to change. (They) interact with one another in (new) ways. We have a lot more perspectives from different areas and backgrounds. It used to be people involved in the same student orgs or in the same major as me (political science).

“But now we have students (who) might be in social work or doing multimedia journalism. (It’s) all these different groups we haven’t had representation from in the past that really provides us being a more well-rounded senate.”

Ziegenfelder has found that being outgoing, hardworking and able to reach out to peers are the best qualities a senator can possess.

“I think qualities that make a good senator are the ones (who) do a lot of outreach,” he said. “The whole point of student senate is to do things for the whole student body and for Lakers to come. You have to think big picture. The ones who make the biggest impact are the ones (who) go above and beyond and put in more hours than the basic requirement.”

Ziegenfelder also advises prospective senators to ask themselves why they are running for student senate. Working on issues or projects that only concern the student or their friend groups does not promote change within the Laker community. When answering the question of “why,” potential future senators can give themselves a direction for their roles the following year.

“What makes (you) fit for representing 25,000 students?” Ziegenfelder said. “What work are you going to do to help GVSU? If they can answer that, it’s going to help guide them the following year. If you go in (knowing) what you want to do, (you’re) going to make a bigger impact because you will be more passionate about the work you’re doing.”