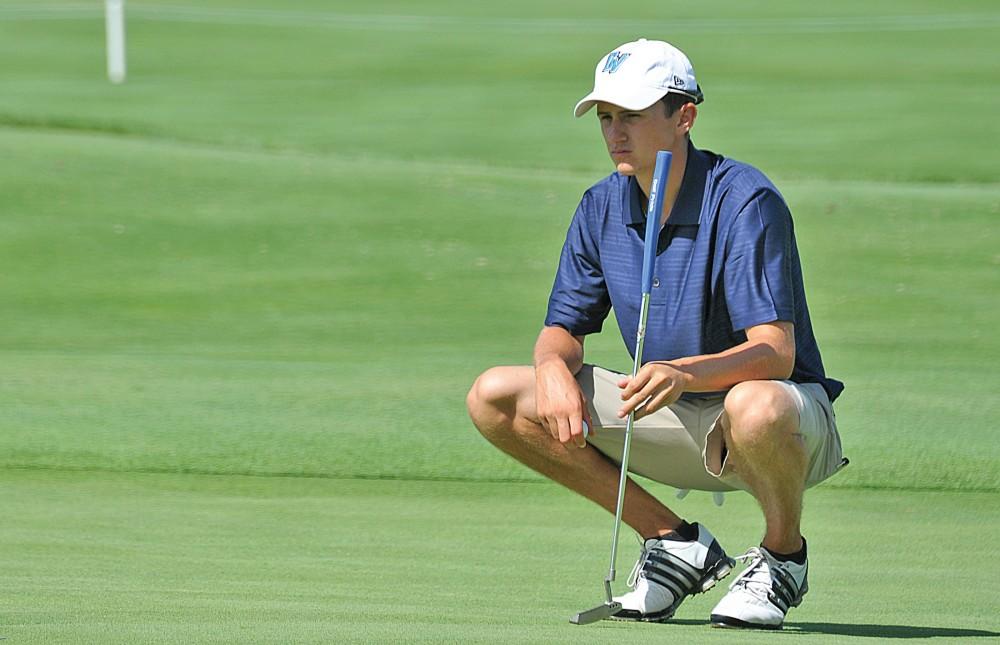 “We really didn’t play well enough to win this one,” senior Jack Rider said. “You go to win and when you don’t win – well – it’s a bit of a failure of a weekend.”

Members of the Grand Valley State University’s men’s golf team knew the 34-team tournament wasn’t going to be a cake walk. Teams from places as far as West Virginia, Tennessee and Missouri traveled to Chicago to participate in the Midwest Region Fall Invitational on Monday and Tuesday. Still, GVSU had two golfers in the top 15 of the 169-player field.

Monday’s clear skies turned to Tuesday’s overcast in the event, which seemed to reflect the Lakers’ dissatisfied moods from the performance while 30 mph wind gusts and cold rain made its way across the greens. The Lakers posted a five-over 293 and were just two strokes off the lead held by Malone University, but a 308 round two dropped them in the standings.

The 601 (+25) was only enough to grab a share for the sixth-place spot with Wayne State University.

“There’s no way around it. We played bad,” Rider said. “To be completely honest, we have a long way to go before we’re at the point where we should be.”

Tiffin’s Tyler Maranville earned the medalist honors after cruising from his day one score of five-under-par 67. He tallied a three-over 75 in day two and won by two strokes.

Despite Rider’s criticisms, he and junior Alex Nannetti tallied eight birdies, which tied for second most amongst the field.

“Those guys are always in the fairways,” GVSU coach Gary Bissell said. “They do an excellent job off the tee and hitting every ball in play and it sets them up well to make those birdies.”

Rider added six strokes to his day two total, and – despite finishing in a five-way tie for fifth – called his performance “horrible.”

Bissell was less critical of Rider and his teammates.

“We just need to calm down and get back to taking it day by day. That’s mostly on me. We were kind of high off our last win. We got a little ahead of ourselves.”

Junior Alex Nannetti fired a 72 (E) in the opening round and – with his four-over-par 76 in round two – was deadlocked in a four-player tie for 13th.

“Alex has got a great attitude,” Bissell said. “He never gives up on a round, doesn’t matter where he’s at. He’s in every shot and giving 100 percent all the time, which is huge for us.”

Consistency is key, and GVSU needs quality play out of everyone, one through five.

Junior Tyler Pulalak played consistently well – firing off 23 pars in the event. He snagged a tie for 45th place while carding a three-over 75 and a five-over 78. Meanwhile, freshman Domenic Mancinelli shot a 76 (+4) and a 78 (+6) to tie for 59th place. Redshirt senior Trevor Rosekrans, who was making his Laker blue debut, was two strokes behind in 80th place.

Rosekrans was the only one to avoid adding strokes to his day one total. He matched his day one 78 with another six-over par to finish with a 156 (+12), earning a respectable finish above half the field.

The other Lakers, however, seemed to let the wind and weather erode their game. It took them 15 extra strokes to complete the course on day two.

“The main thing is just eliminating mental errors,” Nannetti said. “We got to get rid of the three putts.”

Ultimately, it’s going to take five players who can grind it out on the same day, and that may take time.

Fortunately for GVSU, the Lakers will have some time before the GLIAC Championship, which takes place from Oct. 10-11 in Georgetown, Ky.

“We took a step back this week unfortunately,” Bissell said. “Luckily we have two weeks to prepare for the conference championship.”