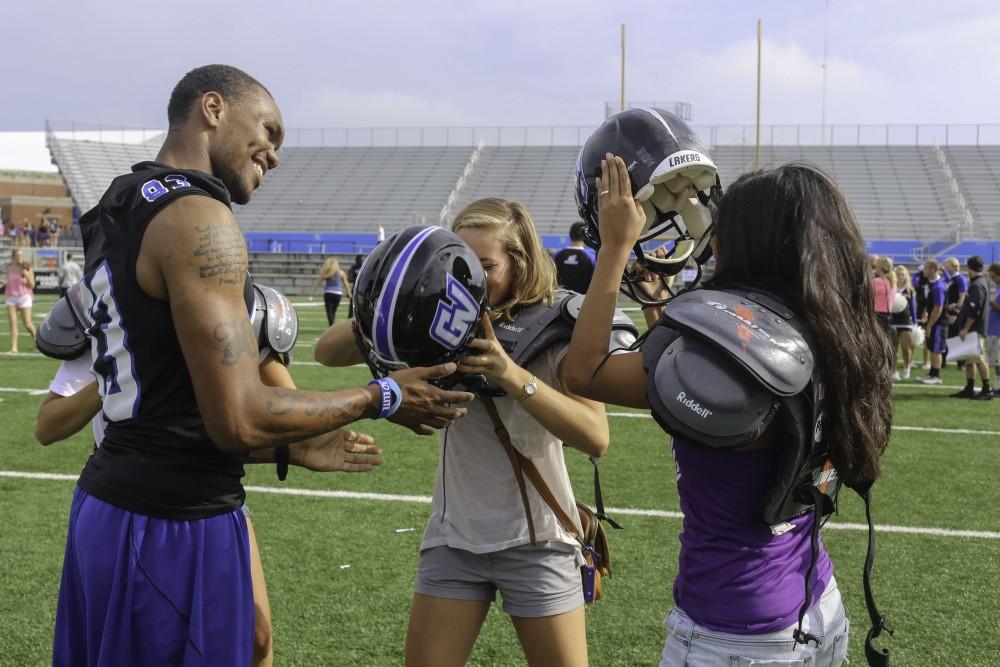 Bill and Jan Anway have been fans throughout the decades of their marriage.

For 21 years as proud supporters of GVSU football, the two are as consistent as they come.

“I just like to support them,” Bill said. “They are a hardworking group of young men.”

Events giving fans access to players are what make community outreach so powerful for an institution. Fan Fest, which took place inside Lubbers Stadium on Thursday night, delivers on that premise.

The event was aimed to say “thank you” to the people who support GVSU Athletics, like Mr. and Mrs. Anway.

Fan Fest provided opportunities to fans and students alike to participate in giveaways, get autographs and snap photos with Louie the Laker.

Kids got a kick out of tossing on a helmet and a pair of pads and running over pylons as if they were a part of the football team. Others, testing their strength and accuracy, tried to boot a 30-yard field goal over the crossbar which, even without a defensive line charging, is not easy.

One individual able to knock one through the uprights was GVSU junior volleyball player Betsy Ronda, who said she likes the event because it gets fans hyped for the season.

A main focus in the grandscope of things was getting as many students to participate as possible.

In the scurry and excitement of Welcome Week, many students, such as off-campus commuters and upperclassmen, are too busy for or unaware of the event.

“Because it’s the first week, it’s hard for people to hear about it,” Ronda said.

It’s easy for Transitions Leaders to pass along the event invite to newcomers, but that only does so much.

For Associate Director of Athletics for Marketing Doug Lipinski, sites like Twitter have been extremely important to expanding Laker Nation.

Staying on top of trends by tweeting photos and short updates has been the best way to engage with the younger generations.

“It’s all about creating a tradition of showing others the pride we have in the university because social media’s reach is nearly endless,” Lipinski said. “As long as we stay innovative with it, we’re going to stay relevant.”

‘We are one’ is the new slogan for GVSU Athletics, but with upperclassmen especially, a ‘been there, done that’ attitude can drive numbers down for that demographic in events such as Fan Fest, Ronda said.

“That’s an experience you’ll never get back,” Lipinski said.

That is why retention of fans is GVSU’s moneymaker, and part of the strategy is “to cater to freshmen,” Lipinski said.

Creating access to the talented athletes GVSU has is a benefit to the fans and indirectly to the teams. It’s all about retaining the audience by growing the community engagement.

“If they have that relationship, they’re more likely to come back on Saturday nights,” Lipinski said.

For decades now, lifelong-fan Bill Anway and his wife Jan have made it their tradition to see the Lakers play on Saturdays because the “great environment” makes the games “a must.”

Their spot in section 205 near the 50-yard line is where they watch. They’ve been there for the ups, the downs and all the moments in between.

The supportive atmosphere behind the blue, white and black squad is electric, but equally expectant. There are always high hopes for every team and student athlete involved.

There is a tradition of winning and competitive greatness at GVSU, and events like Fan Fest are the university’s way of saying to everyone involved, “We could not do it without you.”