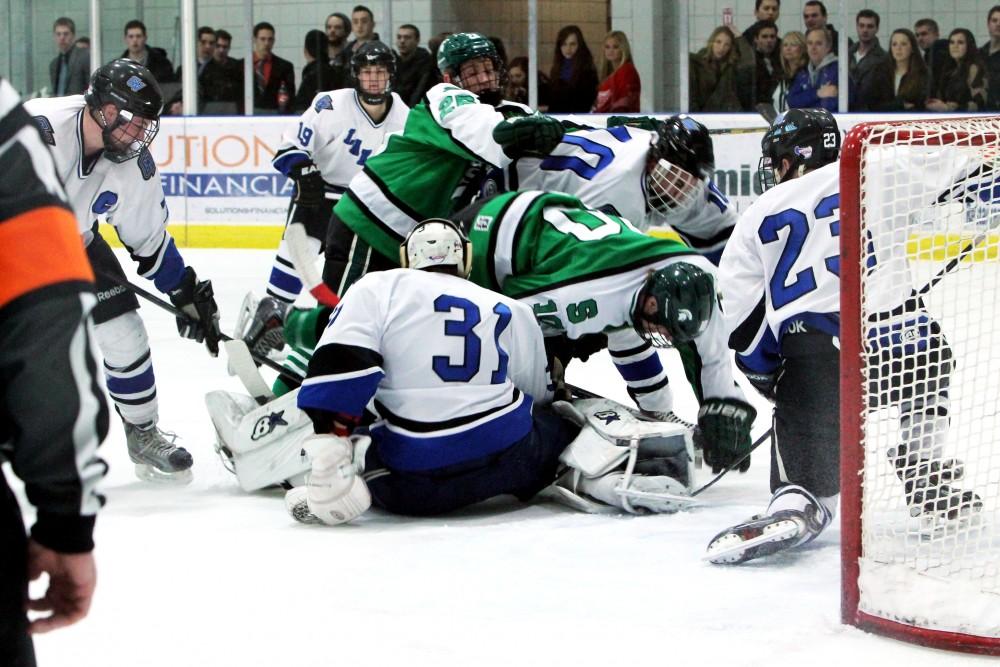 GVSU, supported by a huge crowd and the Laker Pep Band, faced the Spartans with plenty of determination in game one, but ultimately fell, 4-3. Although the Lakers didn’t end up with their desired outcome, they didn’t let it get them down. The boys came back, faced MSU again the next day and responded with a 3-2 win.

Playing back-to-back games in a weekend, not to mention a tough loss in the first game, can take a lot out of a team. But the Lakers, fueled by their desire to make a run in the national tournament and their longtime rivalry with Michigan State, kept a winning mindset — and came out on top.

A huge factor for the win on Saturday was gaining confidence on the ice and getting the puck past the MSU’s impressive defense.

“We just had more puck control and were hitting more,” said sophomore Reede Burnett. “We played our game instead of theirs. It’s always a huge game playing State, playing in front of a big crowd. We look forward to it and we play to win.”

Another factor that greatly contributed to the team’s success was the impressive performance from goalie Spencer Craig.

Craig, new to the team this semester, has only played two games with GVSU, including Saturday’s game against Michigan State.

“He played really well, had good saves and battled for rebounds,” Burnett said.

As most goalies do after a good game, Craig credited the win to the players in front of him.

“There’s a lot that goes into it, the boys bounced back really well from the loss on Friday night,” Craig said. It was definitely a group effort. Games against teams like State; those are the games you want to win. Those are the big kind of teams you measure yourself up against.

“My mindset was to give the guys confidence early on to play offensively, to get in there and take advantage of their chances. I wanted to make all the saves I could, just give the guys some confidence to get into the other end to generate some offense, to keep them in the game from start to finish.”

Craig’s extra effort in stopping almost every puck that came his way helped the team play their best.

“We’ve definitely been improving as the year goes on,” Burnett said. “We started out rough at the beginning of the second semester, but we’re getting back into it and starting back up where we were. After the loss on Friday, we knew we couldn’t lose again, that this is a huge weekend and a big ranking period and we had to win.”

GVSU’s next target is Davenport, which is scheduled to face off with the Lakers at the George on Feb. 7.