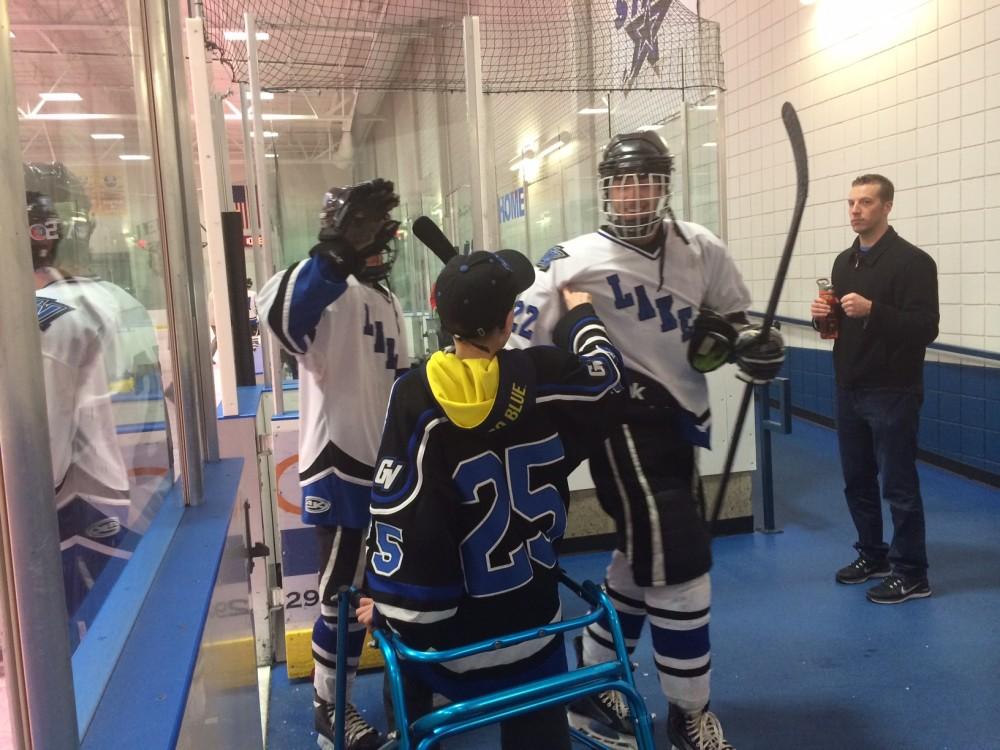 Whether he’s sitting in his spot by the Louie banner or sweet-talking the ladies in the stands, hockey super fan Nathan Vandyken’s favorite place to be is with Grand Valley State’s Division II club hockey team.

On Saturday, the 14-year-old marched around Georgetown Ice Arena with his walker, which he used to get around the rink while watching GVSU defeat Davenport University, 4-2.

Vandyken, who has had complications since his very premature birth, lives with hearing loss and Cerebral Palsy.

“We had a pretty rough go of it for a few years,” said Nathan’s mother, Elise Vandyken. “He had therapies for the first few years of his life, and we’ve tried to make everything as normal as possible for him.”

Part of Nathan’s normal, day-to-day life includes plenty of hockey. When he was very young, his father started coaching hockey at the high school level. Since then, Nathan’s life has always revolved around the ice.

“He pretty much grew up in the hockey rink,” Vandyken said. “My husband plays men’s league and coaches his little brother’s team, so we go to all of those games.

“Nathan is just a hockey fanatic.”

Interestingly, the Vandyken family doesn’t have any ties to Grand Valley State — but for some reason, Nathan fell in love with the team.

Although his love for the hockey team came out of nowhere, his family is supportive of his choices so Nathan can watch his heroes.

And this particular Saturday was a special day in the Vandykens’ book.

At the end of the third period, Nathan and his mother went down to the bench to congratulate the players on their late-season win. What happened next was, in his mother’s words, “probably the best thing that’s happened to him all year.”

“I could not have asked for a better night for him,” his mother said. “It was absolutely fantastic. He was on a high the whole night and the whole next day — nothing could top that night for him.”

Despite his many setbacks and countless surgeries, Nathan is rarely seen without a smile on his face. He ceaselessly has a good attitude and doesn’t let his condition get him down.

“He is constantly smiling,” she said. “Especially when he’s in public. He has no fear at all. He’ll leave me and go find the college girls; I’ll come back to find him and he’s sitting on the front bleacher making friends.”

On Saturday, it seemed every person who saw the smile on Nathan’s face couldn’t help but smile back. The players and coaches love seeing him, and the fans admire how social and friendly he is.

It seems this hockey super fan is developing a fan base of his own.