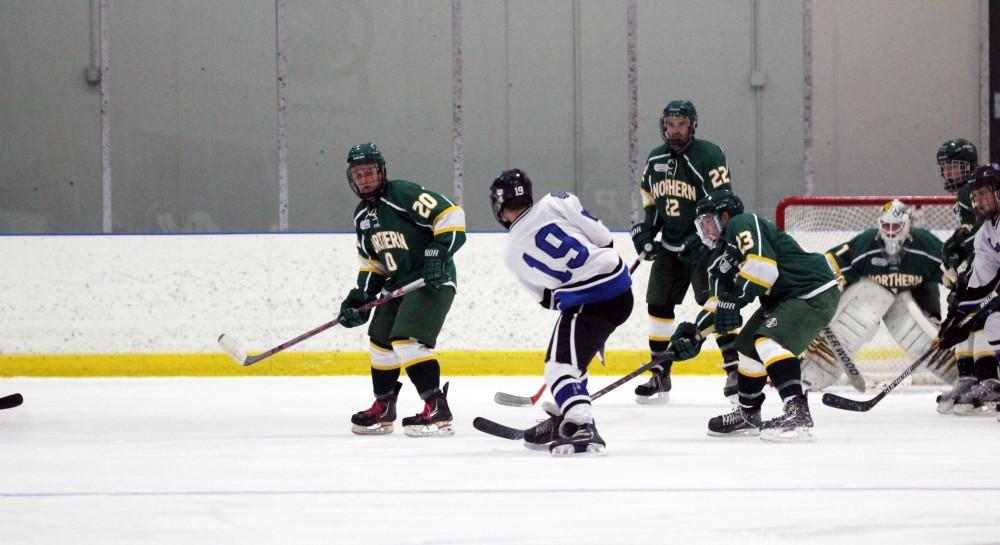 While most kids were buying their first crayon set, Collin Finkhouse was playing his first hockey games.

Finkhouse fell in love with the game because of the speed that ice can offer along with friendships built on the team.

“It’s a physical sport, and so you’re beating up on each other,” he said. “You need teammates that you know are going to stand up for you. Sports that are not as physical you don’t need to be close knit because you are not standing up for each other.”

Although just a sophomore, he is leading the Laker pack with 23 points (10 goals, 13 assists).

The standout attributes a lot of his success to speed and finesse on offense.

“Finkhouse has great vision and has great composure around the net,” said senior forward Matt Smartt. “He brings speed and creativity to our team, while being able to make great passes.”

Finkhouse cites GVSU’s depth for a reason for the squad’s success this season.

“The team has a lot of good players,” he said. “We play a lot of teams that have one good line that can play with us, but their next three are not nearly as good as ours. We have four really solid lines of good players.”

Smartt says the team’s goal this year is to win a national championship. He feels confident with the team that they’re working with and is excited for what lies ahead.

GVSU works as well on the ice as they do off the ice.

“I have played 15 years of hockey and this team is as close knit as any team I’ve ever played on,” Finkhouse said. “I have played on probably 10 different teams with totally different guys and we just have great team chemistry.”

Finkhouse also said that there is always room for improvement.

“I would really like to get more physical, and I could get better in the defensive zone,” he said.

As a team, the Lakers are hoping to be more consistent from period to period.

Finkhouse, an education major, is hoping to one day teach math while also coaching hockey or football.

The common dominator of those two sports? The physical atmosphere.

“They are two of the most physical in the world outside of like, rugby,” Finkhouse said. “It’s messed up in all hockey player’s head because we enjoy trying to hit each other as hard as we can. I don’t get why, but we do. When I was little I hated playing soccer because it was not physical enough. I do not really enjoy hitting other people as much as I know that people want to hit me and then making them miss.”