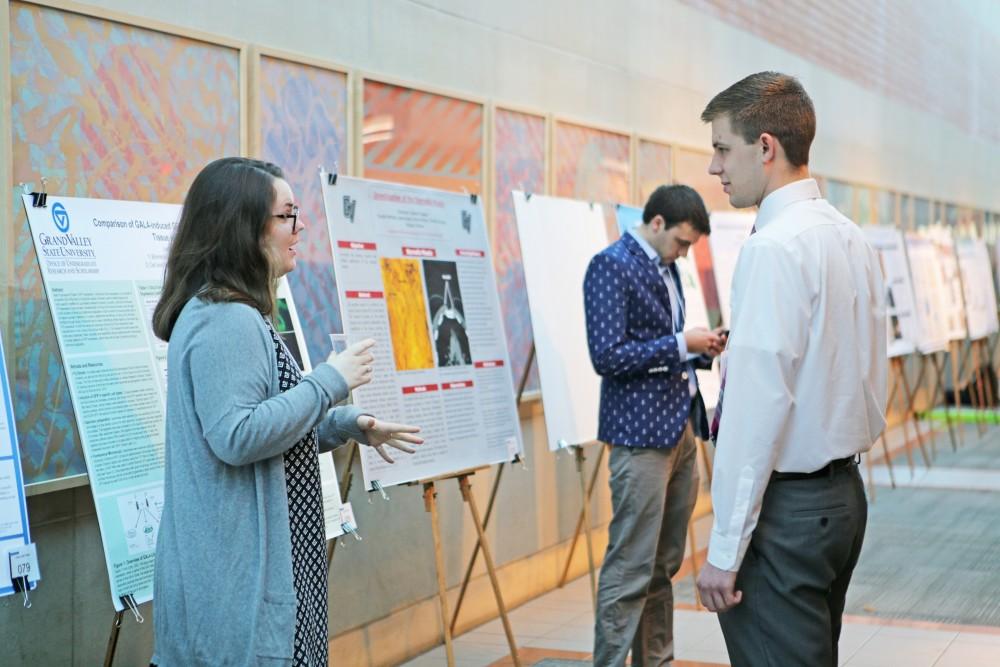 After spending almost a year on research, Jorgen Reberg was ready to present his research on the history of propaganda. He even came up with a name for his own theory: stratified prioritization. He described the theory as the threshold that people cross when they reach a level of authority that changes their priority from ideology to economy.

Reberg was the only history poster in a sea of science-based research. A senior at the university, he was thrilled with the opportunity of being able to present his research to hordes of interested people. Not many universities give students opportunities like this, and he said he felt honored to be able to participate in the event.

Feeling excited and confident about his knowledge of his topic of choice, Reberg also was able to learn new information on this topic as he talked to people at the event.

“I’m very excited to present,” Reberg said. “I’m comfortable with public speaking and I want to see what some of the professors think about my research.”

Though not many people are familiar with the history of American propaganda, Reberg was eager to share what he had learned. He said he loved being able to discuss the history of public relations, before it became known as propaganda, with Professor Roger Giles, who had a considerable amount of knowledge about the topic.

Michelle Brown, a junior, has been working on her research since last summer. Working with two other students, Nicole Yakimovich and Randy Winchester, the trio has been working to change the chemical makeup of a variety of pharmaceutical drugs.

For Brown, this event not only gives her experience speaking about her research, but also the opportunity to make connections, work on professional development and work in close groups.

This project has given Brown the desire to continue her research, and she has even started on another project already. Unfortunately, a busy schedule won’t permit her to return to this event next year.

A freshman focusing on the regenerative properties of planaria, Violet Ruiz said she was nervous to present her research to students. Having worked on it the previous semester for a class in cell microbiology, she had already presented her poster and was gaining more confidence in her ability to do it again.

“The class I was in focused on the medical application of planaria,” Ruiz said. “It has the ability to regenerate stem cells and we are working to figure out the effects of Col-3 on that ability.”

Other classes focused on different aspects of planaria research, and Ruiz enjoyed talking to those students about how their research compared to hers. She also loved being able to share her research with students of all backgrounds, as well as being able to participate in this event gave her that opportunity.

The class that Ruiz took greatly inspired her to pursue further research opportunities this summer. She plans to study achinonater baumii, another type of microbiological research. She hopes to be able to present that research at next years’ event.

Though endless hours of work and effort went into only a few hours of presentation, countless students reaffirmed that it was all worthwhile for this opportunity. Many plan on returning next year, most with new research in a similar field.