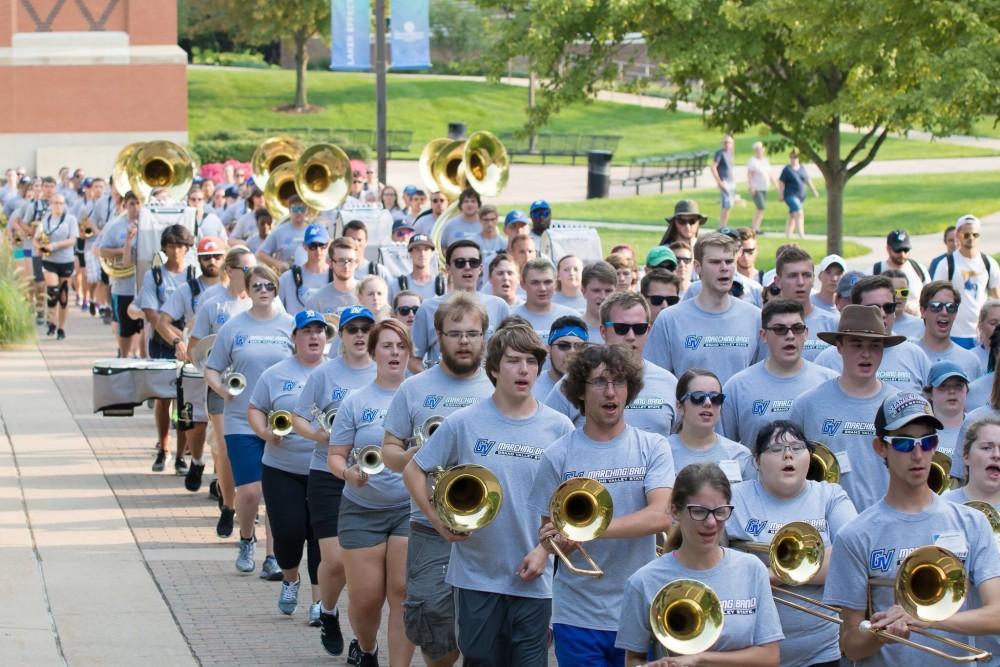 The GVSU Marching Band marches to a football open scrimmage during band camp to practice a performance.  Courtesy / Lindsey Willett

While students excitedly count down the days until the kickoff of football season, the Lakers’ loudest team of fans has been working even before anyone arrived on campus. With their largest group of new members to date, the Grand Valley State marching band is less than a week away from their football debut.

With the full band uniting for band camp last week, 95 of the members are new to Grand Valley according to Director of Athletic Bands John Martin. With first-year students making up nearly half of the band, Martin said this year’s young band has been filled with a unique energy.

“Every class has it’s personality, and this is a really sweet class in the best way,” Martin said. “They’re hard workers and their attitude is so good.”

The program’s long-term goal is to have a band that contains one percent of the student body, Martin said, so the size of this year’s freshman team is a step in the right direction. But within the band, the youth is extended to the leadership as well, with both drum majors being sophomores, said Marching Band President Lindsey Willett.

“I think the fact that it is such a young group this year and that there’s a lot of new faces in leadership that it has made the bond a little bit stronger,” Willmett said. “It feels like we’re in this together.”

Martin said that the main goals of band camp are to integrate band members on a variety of levels. The training week involves teaching new members how to perform in the same way, building a bond that creates a unified atmosphere and days full of music from 9 a.m. to 9 p.m.

“You don’t realize how much work you’re putting into (marching band) right off the bat,” Willett said. “Then you get home and you’re exhausted and that’s when you realize that you did so much and that maybe you should have put a little bit more sunscreen on.”

After finishing a “transformational” band camp, the band was able to take next steps toward game day with Fan Fest on Thursday night. For freshmen, the night was a welcome event, ending with the class forming a massive “GVSU” in Lubbers Stadium, but for the band, it was a night to showcase and apply what they have learned thus far.

“(Fan Fest) works out great for us to have a first run in front of a completely unbiased group of freshmen who are just excited to be there,” Martin said. “It’s (also) great because it’s the first time our (new) students have been on the field, so it’s a new environment for them, so you put them out there and they have to trust each other.”

Looking at the first football game and beyond, Willett said that aside from performing at a high caliber, the band’s leadership is working hard to invite first-year members into the family and train them to be next year’s leaders.

“For first-years, my main concern for them is to make sure they feel at home and that they understand that if you’re a part of the Laker Marching Band, you’re a part of the biggest support system on this campus,” Willett said. “Just making sure that they’re at ease and they’re comfortable with the program so that when they come in as a second-year, they’re good to go.”

For Martin, the days leading up to the first game will be telling, but the band’s successes so far have left him optimistic for the season to come.

“It’s always fun to see how a class develops, and I’m excited because we’re coming out of the gates so good right now,” Martin said. “There’s not a lot of friction, and so I look forward to seeing how (this band) develops as a group.”