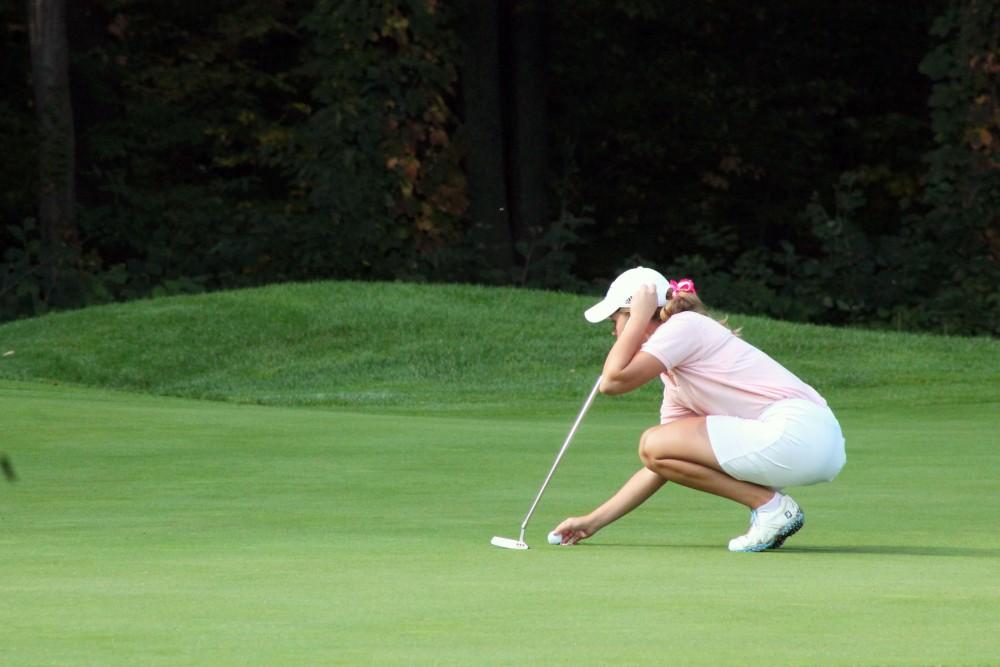 Amongst the 132-player field, two Grand Valley State University women’s golfers rose above the rest of the pack to complete a one-two finish atop the leaderboard in the NCAA Division II National Preview hosted at The Meadows golf course over the weekend.

GVSU finished in a tie for first place with Florida Tech, but eventually lost in a three-hour playoff. Individually, however, senior Kelly Hartigan claimed medalist honors for the 12th time in her career, setting the GVSU record for individual victories in the process.

Hartigan showed off her skills in the second playoff hole on Sunday, when she sank an impressive chip in for birdie. The Lake Orion, Mich. native led the way with rounds of 73 and 77 over the weekend, tallying a six-over par 150 across the 36-hole national preview.

“Kelly’s about as consistent and steady as they come. When she gets that putter going – she can really be unstoppable,” said GVSU assistant coach Megan Ingles.

Hartigan and junior Gabrielle Shipley certainly showed they were comfortable with the course. Shipley finished one stroke behind Hartigan individually, earning second place.

“We know we can play this course better than anyone,” Shipley said.

Inevitably, Florida Tech made its missed flight more worthwhile as it took home the team trophy. But for the Lakers, there’s no hanging of chins.

“It just proves to these girls they can play against the best and win,” Ingles said.

After diving into NCAA Division I tournaments right away this fall, the Lakers wanted to make The Meadows look small. They were hoping to stay sharp to turn their third-place standing after day one into a tournament win coming into Sunday’s second and final round.

Being at home certainly helped the Lakers feel out the course in the closing round. And that was to their advantage as the pin placements were much more difficult Sunday.

Coach Mailloux gave her team the advice to pay attention to the pin placements, as they were going to be in difficult and in unfamiliar spots.

“It was pretty tough with the pin placements, but we were able to make it work,” freshman Samantha Moss said. “You know the course, and you know how the ball is going to roll.”

The tournament won’t be one the Lakers will soon forget as they ride this momentum into October. As for playing on their home course, there are no worries for this squad when it comes time for the national championship in May.

Behind the two leaders for GVSU were sophomores Alex Taylor, Julie Guckian and Moss.

The team returns to action at the Merrimack Invitational on Oct. 5 in Kingston, Mass.