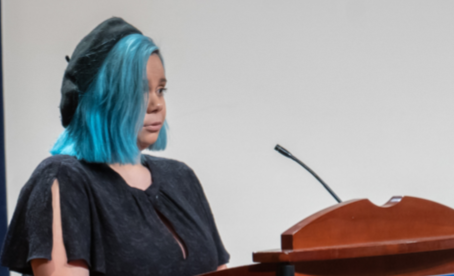 A year after the infamous shooting at her high school in Parkland, Fla., survivor Samantha Fuentes visited Grand Valley State University to provide her story and  perspective about gun violence in American schools. On Feb. 27, she sat on a discussion panel with several faculty members from GV’s College of Education. The event titled ‘Safe Learning Environments for our Students’ was held in Loosemore Auditorium on the Pew Campus and explored the various questions of ethical safety in schools.

The event had a prominent basis around gun violence and its recent prevalence in school discussions across the country. The shooting at Marjory Stoneman Douglas left 17 of Fuentes’ classmates dead and even resulted in injuries of her own. Fuentes’ was hit with shrapnel and a bullet pierced her thigh while hiding with her fellow classmates during the shooting. Since the event, Fuentes has traveled the country spreading her story and speaking at events to promote the experience of gun violence victims.

“I was never really an activist before,” she said. “I was surely outspoken but I never thought that my words and my story could influence and inspire people. I think any survivor has a story and a power to them and I learned to harness that power and use it towards good.”

Unfortunately, Fuentes survival story is all too common in America. 2018 was a record year for school shootings in the U.S., with the Federal Emergency Management Agency (FEMA) identifying 94 in total. Most U.S. school districts have around 180 schools day each year, which averages out to one school shooting for every eight school days.

Fuentes’ 17 late classmates and staff are only a fraction of the 113 individuals lost to school gun violence last year. Some see this as an issue over gun control regulations, but not everyone. In fact, several school districts across the country see more guns as a solution, not less. This idea was the basis for the documentary ‘G is for Gun’ which was screened during the GVSU safe learning event.

“We aren’t doing a service to students to shy away from those topics,” said event panelist Chasity Bailey-Fakhoury. “Especially when they are doing active shooter drills in the classroom. There are age appropriate ways to have discussions with students about gun violence and frame it in a way that they can understand and grasp.”

Panelists at the event prominently emphasized the importance of awareness when discussing gun violence and safety protocol. The screened documentary provided perspectives from both sides of the debate on whether teachers and school officials can effectively protect students from an active shooter. Issues of training and ethics were proposed against the practice, while immediacy and training programs were posed to support it. Many movements have risen in opposition of programs like these, especially those who emphasize gun policy change with stricter regulations.

“We often forget how much we glorify weapons in the way we talk about them,” Fuentes said. “People will say they can protect people, they can protect schools but the truth is at the end of the day this is what they’re really doing. Change the conversation around guns, they’re not the reason we are safe.”

Fuentes is able to do something many lawmakers pushing for further gun control cannot: she can pull from her chilling experience to exemplify her wish for change. Her activism for gun reform is something that she believes requires two solutions. One is a call for change in the national narrative around guns; how people talk about them, something she believes is not taken seriously enough. This shift in rhetoric is also proposed with a change in gun legislation to lower the risk of weapons falling into the wrong hands.

Dozens of other survivors from Marjory Stoneman Douglas have also become young activists fighting for gun policy reform. In fact, several of of them were featured on Time’s Top 100 of 2018 list because of their outspoken activism. Even before they could vote, the survivors of the Stoneman Douglas shooting have stood up to reject old constraints about gun reform and insist their country could do better to keep its young people safe. Like Fuentes, many have found the benefit in telling their story.

“When outrageous things happen to you they require outrageous responses,” Fuentes said. “But the pain my community experienced is felt in places all over this country. After the shooting my main goal was to make school safe again, I didn’t want another student to go through what I did.”

“I’m a bit more encouraged now than I was after Sandy Hook,” Bailey-Fakhoury said. “This generation of students is standing up and saying ‘enough’. I am hopeful of what is coming.”

Panelists agreed that what makes a safe place is safety precautions that are properly enacted, with each institution adapting its own procedures. Having conversations about gun violence and safety can be fearsome especially for younger students, however these discussions create awareness about safety protocols that can save lives. Fuentes says she has since adopted a new understanding of how to incorporate safety into her daily life while not feeling resentful of what she has experienced.

“This experience has taught me that there are so many people who have the ability to hate, but that doesn’t necessarily mean that you do,” Fuentes said. “And just because someone inflicts that hate on you doesn’t mean you have to inflict it towards the world, even though it hurts. Sometimes it’s better to love.”