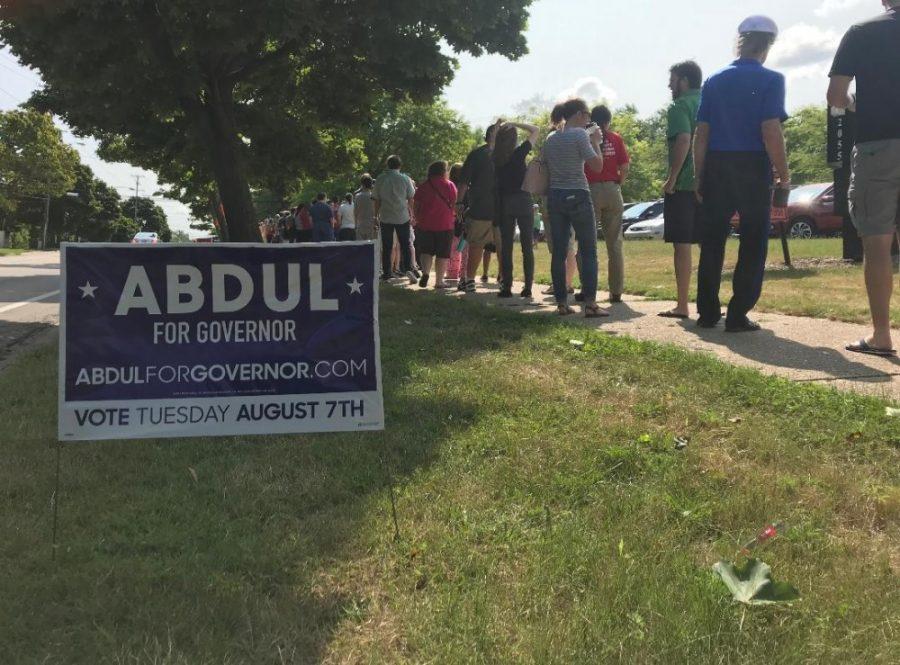 With Michigan primaries just around the corner, several candidates are gearing up for election season. On July 28, governor candidate Abdul El-Sayed visited Grand Rapids for a political rally to garner support for his campaign. Hundreds of residents from the area crowded Ottawa Hills High School to rally behind El-Sayed and several local government officials.

Michigan Board of Education member Lupe Ramos-Montigny was the first to speak at the event. Ramos-Montigny has worked with Grand Rapids Public Schools for thirty-six years and endorsed El-Sayed as a candidate who will help improve Michigan education. One of El-Sayed’s campaign points is to ‘de-DeVos’ Michigan’s education system.

One message that appeared to excite the crowd repeatedly, even bringing participants to their feet in cheers, was the idea of a government that is ‘about the people’. El-Sayed has used this phrasing often in campaign ads and rally speeches.

“It’s about whether or not we want to rise up and dignify a government that is for the people and by the people,” El-Sayed said.

El-Sayed is the former director of the Detroit Health Department, giving him the ‘underdog’ label of this election season. The candidate has been campaigning all around Michigan to stir up support including rally stops in Detroit, Flint and Ypsilanti.

This primary season, El-Sayed is going up against two other democrats for the governor nomination – Shri Thanedar and Gretchen Whitmer. Whitmer served on the Michigan House of Representatives from 2000 to 2006 and is making her second attempt at the governor position. Thanedar is an entrepreneur and author who was born in India. This election cycle is the first political leap for both El-Sayed and Thanedar.

A poll recently commissioned by WOOD TV8 puts El-Sayed far behind his Democratic opponents, with Whitmer leading at 49 percent. El-Sayed has said he is not concerned by these numbers and is confident that the turnout in Grand Rapids is proof his campaign is gaining momentum. Michigan primaries are scheduled for August 7 and polling numbers can only predict so much from Michigan voters.

Although the Grand Rapids area is most commonly a conservative area of the state, there has been an increase in democratic rallies and movements across the city. Following the 2016 presidential election, many Grand Rapids residents took part in protests and demonstrations in response to Donald Trump winning the presidential race. Now two years later, many are curious to see who Michigan will choose for their representation.

Visit www.michigan.gov/sos for more information about voting in Michigan in the 2018 election.