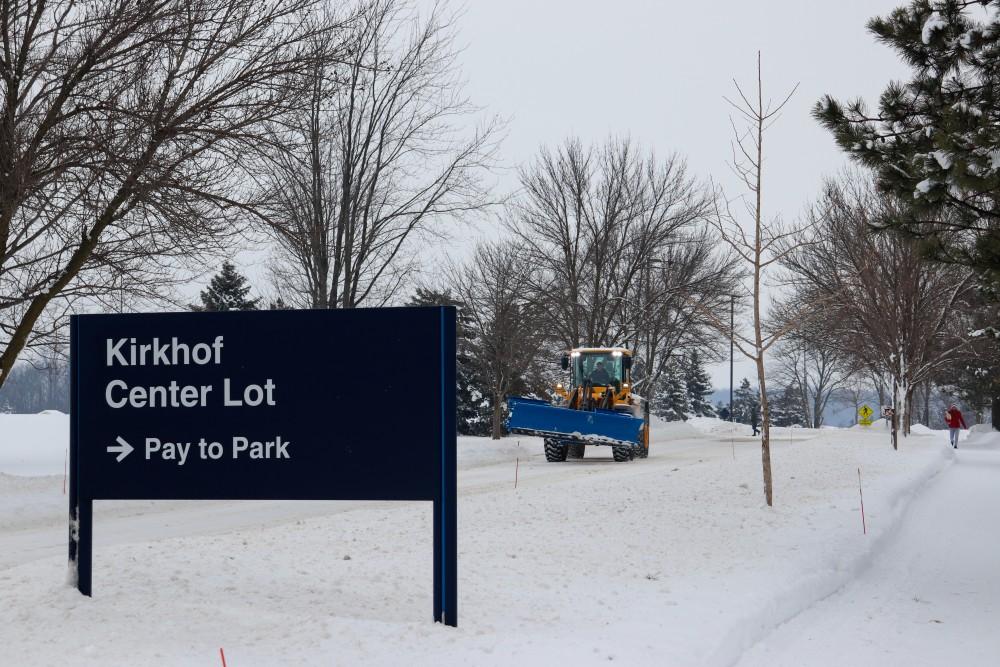 Michigan winters, though beautiful, are frigid and hazardous. Snow days are not uncommon — in fact, they’re considered a rite of passage for those who endure these subarctic conditions year after year. Grand Valley State University is known to permit the occasional snow day in exceptionally bad weather, but last week, the brutal temperatures and continuous snowfall broke records all over the Midwest and caused the most consecutive snow days in GVSU history.

“There’s only ever been two consecutive snow days, never three in a row, and there’s certainly never been five. This is unprecedented and honestly may never happen again in campus history,” said Grand Valley Police Capt. Jeff Stoll.

While many students and staff members had extra time off, GVSU’s essential staff, which includes dozens of student employees, still had to report. Stoll said that the efforts of the student employees helped keep things running as smoothly as possible throughout the week.

Lauren Hight is a biology major at GVSU and a service assistant in parking services. Hight explained that though she was grateful to get her hours in last week, the dangerous conditions posed challenges for her commute to work and back.

“It was tough for me to get to work. I was late, but I got here! I had to call dispatch to come and get me. I do live on campus, but normally I’d have to walk about 20 minutes to get here… I was here three out of the five days, I got a ride each day because it was too unsafe to be outside. ” Hight said.

In last week’s temperatures, a 20-minute walk could have created the onset of frostbite.

Because ice-melting salt is ineffective below 10°F, last week’s bitter temperatures made roads and campus walkways slick and too hazardous for use. Though road conditions are heavily considered before closing campus, GVPD says timing is a big factor as well.

“If the storm hits at 10 or 11 at night, we can get things cleaned up by the morning. When the worst of it is coming through at 10 or 11 in the morning, though, that’s a different story,” Stoll said.

Michigan Governor Gretchen Whitmer’s declaration of a state of emergency was also considered in the decision to stay closed for so long.

The Polar Vortex of 2019 is the first time campus has closed for an entire week for any unplanned reason. Hundreds of schools and businesses throughout the state closed as well. White-out conditions made for dangerous driving, but GVPD said that a lack of people out on the roads led to few accidents over the duration of the blizzard. Now that the storm has passed and temperatures are increasing, clean-up is the main priority of GVPD and campus maintenance crews. While commuter lots went unused and are in decent shape, resident lots are another story.

“The issue has been temperature because there’s a lot of snow that’s frozen to the ground. As temperatures rise, that will be easier to remove. We are hoping to clear resident lots over the weekend and clean it up in time for classes to start again on Monday,” Stoll said.

After five days of being snowed in and the cancellation of what would’ve been GVSU President Thomas Haas’ last President’s Ball, many students are over the weather and ready for spring to arrive. Stoll addressed rumors that the week off could cancel spring break, but clarified that last week’s storm has nothing to do with other events on the academic calendar.

“There is no intention to change spring break, this was an act of God and doesn’t affect future campus events. The campus calendar is set up, and we adjust around that in cases of inclement weather. Unlike K-12, we are not required to make up days,” Stoll said.

Though thermometers are rising a bit now, they will drop again and the freezing of slushy, messy snow could pose another issue for commuters. Campus is not likely to close again soon according to GVPD, but it’s not impossible either.

“It’s hard to tell now, but challenges are foreseen with the temperatures rising this weekend and then dropping again,” Stoll said. “This is going to inevitably refreeze water on the roads and we will have to deal with that.”