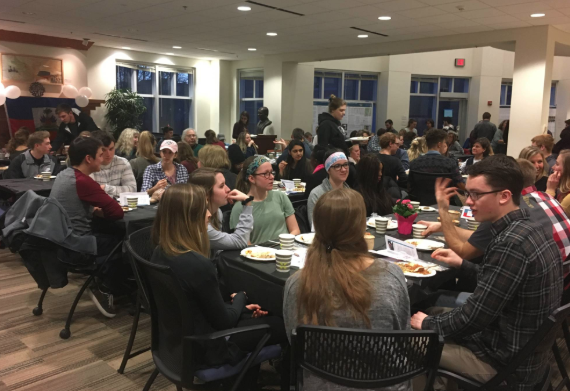 On Sunday, March 24, students and faculty showed Grand Valley State University a different side of Haiti. In the Niemeyer Living Center multipurpose room, members of Students for Haiti (SFH) gave GVSU a taste of Haitian culture to educate and provide students an opportunity to share about their study abroad experiences as well as accept donations to give a Haitian student a chance at a GVSU education.

“The main purpose is to raise awareness about Haiti, share about the study abroad program and what’s been happening with that, and let people taste Haitian food to see what it’s like because they’ve never had it before,” said professor Peter Wampler.

“It was neat to watch people try food that is different than what they’re used to,” said SFH adviser Kelly McDonell. “We served goat last year, and that’s not something people typically eat here. (One of my favorite parts is) getting people out of their comfort zone and trying new things.”

After dinner, students who studied abroad in Haiti shared their experiences. While the media’s perception of Haiti is full of violence, crime, poverty and disorganization, students at GVSU have different stories.

“With professor Wampler’s knowledge of Haiti and hydrology to lead us, we distributed Sawyer water filters to various locations,” said GVSU student Megan DeKeyser. “In Haiti, we saw a lot of devastation from both natural disasters and unjust foreign intervention. However, the Haitians we met were hopeful for the future of Haiti. Everyone there has immense pride for their beautiful country, as they should.”

Not only have students stepped foot in another part of the world, but they have made an impact while furthering their education.

“I was an engineering student at the time, (and for one of the projects) we built a rocket pump and helped children (at a library and then a school) to construct and launch their own bottle rockets,” GVSU student Tyler Martin said. “The rockets would shoot maybe 100 feet into the air and the children would all chase it down to try and be the one who caught it. The second time we did it… the kids were able to collect, refill and relaunch their rockets on their own. It felt really good when we got to leave the setup with them for them to use.”

Donations given at the Haiti dinner will be put toward the Empowering Haiti Through Education fund, which seeks to give a Haitian student a scholarship to receive an education at GVSU. The scholarship began in 2011 after an earthquake.

Currently, with $60,000 dollars in the scholarship, GVSU would have enough to give a Haitian student about $3,000 with the terms of the endow scholarship. Wampler, however, hopes to raise the funds to supply a student with $5,000 or $10,000 and make a difference.

“The Haitian people, in my opinion are strong, proud, ambitious people, and they would love to have their country change and they have high hopes for their country to change,” Wampler said. “But there’s a lot of things kind of working against that in Haiti and it’s very complicated. On a person-to-person level in Haiti, they are quite amazing people. Their families are strong, they care for each other and those are the stories that really don’t get told.”