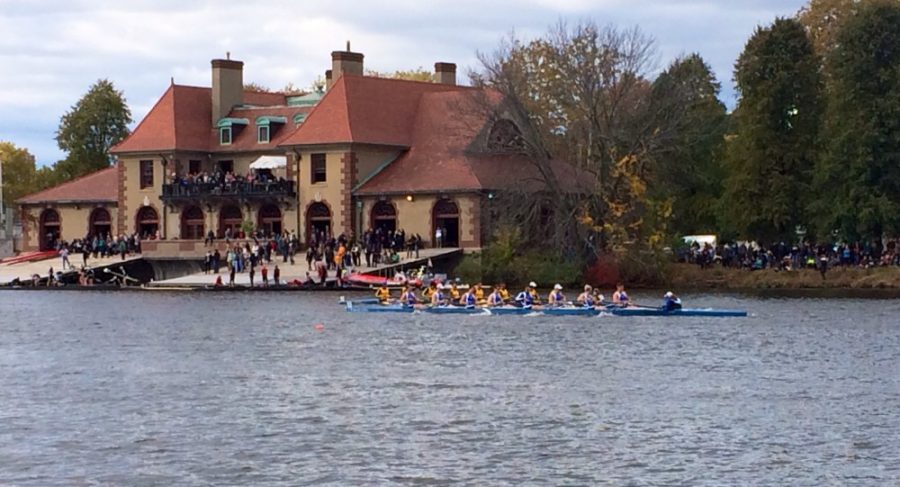 The Grand Valley State University rowing club participated in a regatta over the weekend that attracted teams from all over the world – Great Britain, France, Germany, Austria, Canada, the Netherlands and South Africa.

The 50th annual Head of the Charles Regatta was hosted in Boston from Oct. 18-19. It is the largest regatta boat-wise on the Lakers’ fall schedule, and is also the biggest one hosted by the city – equivalent to the Boston Marathon of rowing.

That didn’t deter the Lakers, who are on a quest to become a top-notch program this season.

“I see all the makings of this being the fastest year of my career,” said John Bancheri, the director of GVSU’s program for 10 years and head coach of the men’s varsity team. “We’ve got to earn it every day. This is the flagship of the institution.”

The teams have been representing the institution with pride lately. Sunday, the Women’s Varsity Eight used good positioning of the first bow to its advantage. A time of 17:47.22 earned the team the fourth-place medal. The winner of the 30-boat race was Bates College, which paced the 4800m at 17:25.60.

Just before that race, the Men’s Varsity Eight snagged a third-place medal in a 44-shell race. GVSU finished with a time of 15:24.65, less than two seconds behind second-place Hobart and William Smith Colleges.

The leader – holding a time of 15:14.73 – was the shell representing the University of Michigan.

“They shouldn’t have beaten us. It makes me sick,” Bancheri said.

He was disappointed about having to take the outside bend of the Charles River to pass the University of California-Santa Barbara in the middle of the race.

“It added another 100 meters to our course. I’m not worried about the end result right now, although fantastic…” Bancheri said. “Finishing third in this field is huge for us. I feel we should have finished higher.”

Despite that, it was great for the rowers to finish strong amongst the 50-plus teams competing.

“Anytime you do this well in such a big venue it shows we have potential,” said senior captain and club treasurer Austin Burris.

The Women’s Varsity Eight was just as impressive, if not more so, considering the Lakers graduated half the team that took first in 2013 at the Head of the Charles.

They have targets on their backs, but the new leaders filling big shoes now know they have to close the gaps between where they are and where they need to be.

“They’re motivated by their fourth-place finish,” said women’s varsity coach Hugh McKeegan. “Being beaten like that, they have a target they’re looking for now. It’s all fuel to add to the fire for winter training.”