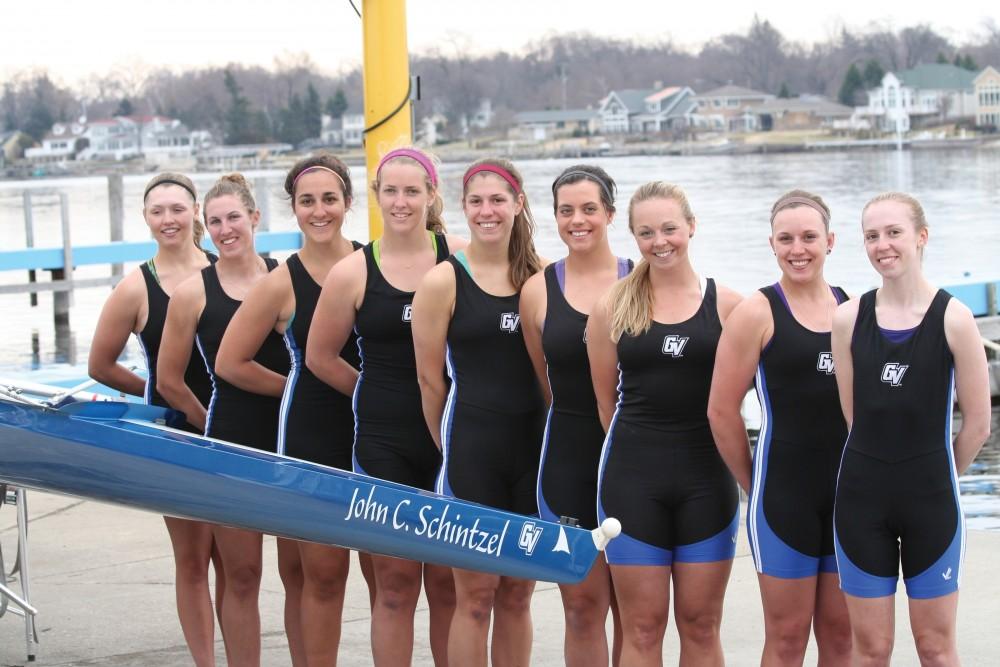 The men’s varsity vessel was named after former GVSU President Arend D. Lubbers, while the women’s boat was named after John C. Schintzel, who did much to help the club’s development before he passed away last summer. It was a tear-jerking moment for some.

Coach John Bancheri said the sun started to shine as the Laker women put their boat in the water.

“It was the wildest thing,” coach John Bancheri said. “Just one of those moments.”

The women went on to claim first place in every race over the weekend and set a course record in the Sunday series against Purdue University to secure the most points on the women’s side.

GVSU was up against some of the best in the Midwest, as navies from Purdue, the University of Michigan and the University of Illinois participated in the event, which had 15 universities and high school programs in attendance.

“The overall goal is always to win the entire thing, but I know the women are happy we won the overall points for the women,” sophomore Christina Pavano said.

However, the GVSU men were unable to duplicate the first-place effort.

The Lakers were hyped up with an opportunity to compete against their nationally recognized opponents.

“We always feel like we can compete with anybody,” Robbie DeWeerd said. “The faster a team is supposed to be, the more excited we get to race them. We like the opportunity to be able to compete with those guys and maybe be able to knock a few of them off.”

Michigan had the most points overall on the men’s side, while Purdue proved to be the overall champion.

The Boilermakers, who had recently fallen short against the Laker men at the 41st San Diego Crew Classic, found a way to win with 51 team points — one point ahead of GVSU.

“Purdue’s a big, strong program,” Bancheri said. “They’re very good and they have power in numbers, and that’s where we got beat.”

GVSU senior Nate Biolchini said he and his teammates still performed well against higher-caliber navies with bigger physique, on average, and a larger student body to pull from.

For Biolchini and his senior teammates, it was the first time failing to bring the cup back from Spring Lake to Allendale.

“We liked the kind of competition,” he said. “In the rowing world, we’re right there with them, but in most other sports we don’t really compare.”

The Laker navy will compete next at the 46th MACRA Championship Regatta on April 26 in Ypsilanti, Mich.