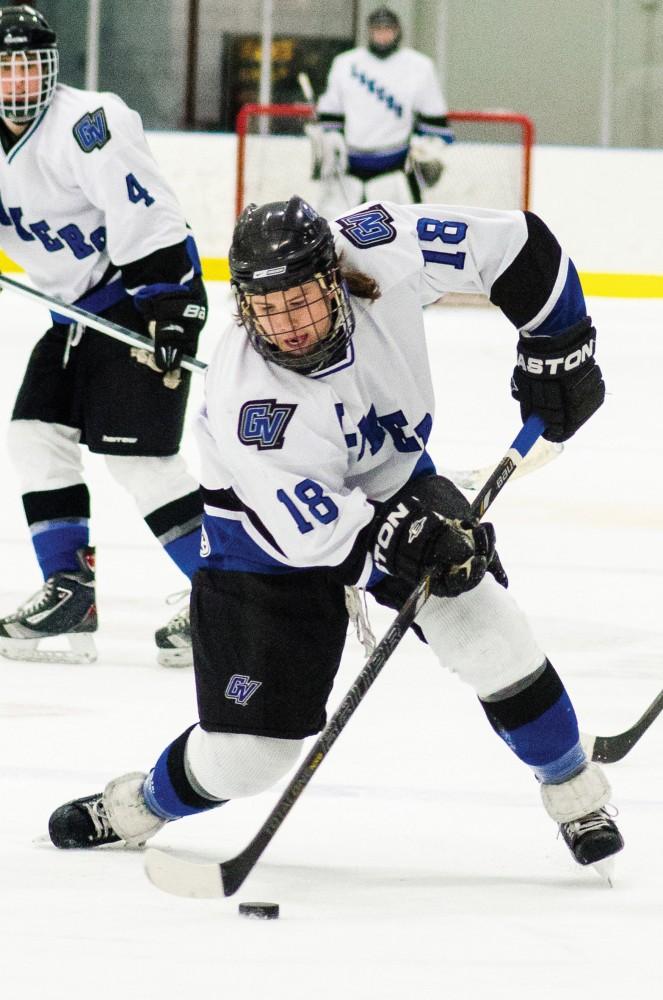 Outside, the weatherman called for clear skies and balmy, early fall weather over the weekend, but inside the local ice arena, the air was feeling a bit more frigid than usual for the men on the rink clad
in blue and white hockey jerseys.

The first two games of the Grand Valley State University Division II men’s club hockey season is in the
books with a pair of losses, 3-2 and 6-4, both to Wayne State University. Although spirits were low
after the games, hope remained for the Lakers.

There were a few silver linings during the weekend games. Returning player Bobby Penrod ended up
scoring three goals for a hat trick. Also, Forbes said the offense held its own and played well all
weekend.

Although the offense was strong, sending shots towards the net left and right, the only problem was
none of them were going in the net.

“We had trouble finding the back of the net all weekend,” Matt Smartt said. “Our biggest problem was
not being able to score.”

The lack of scoring opportunities combined with a struggling defense called for trouble on the rink for
the Lakers.

Defensive player Nick Heinrich was able to see promise in the team’s rookies, but said that overall
team defense is still an area for improvement.

“The biggest area of our game needs to be team defense,” Heinrich said.

Even with an onslaught of shots on the opposing team’s goal, Forbes said this isn’t enough to win a
game. The coach is planning to focus hard on his defense to get them in mint-condition for their next
competition.

“Saturday we were flat the first two periods and got behind, but we had an excellent third period and
closed the gap a little bit,” he said. “We still have some things to work on.”

Even though the scoreboard did not do much for GVSU team pride, the team is not without hope. The
weekend was about seeing where the team stood in the realm of Division II club hockey and focusing
in on improvements.

The head coach wasn’t the only one who still holds on to hope for the team.

“The best area of our games this weekend was our hard work ethic,” Heinrich said. “The score didn’t
show, but we worked hard and never gave up.”

Heinrich said that, in spite of the loss, he believes GVSU was the better team, and once the Lakers gain
experience working together and building off each other’s strengths, they will be more than happy to
prove it.

“The competition we are looking forward to the most is to get to the national championships in Boston
in March,” he said. “I know that’s a long ways away, but we have goals that will help us get there.”