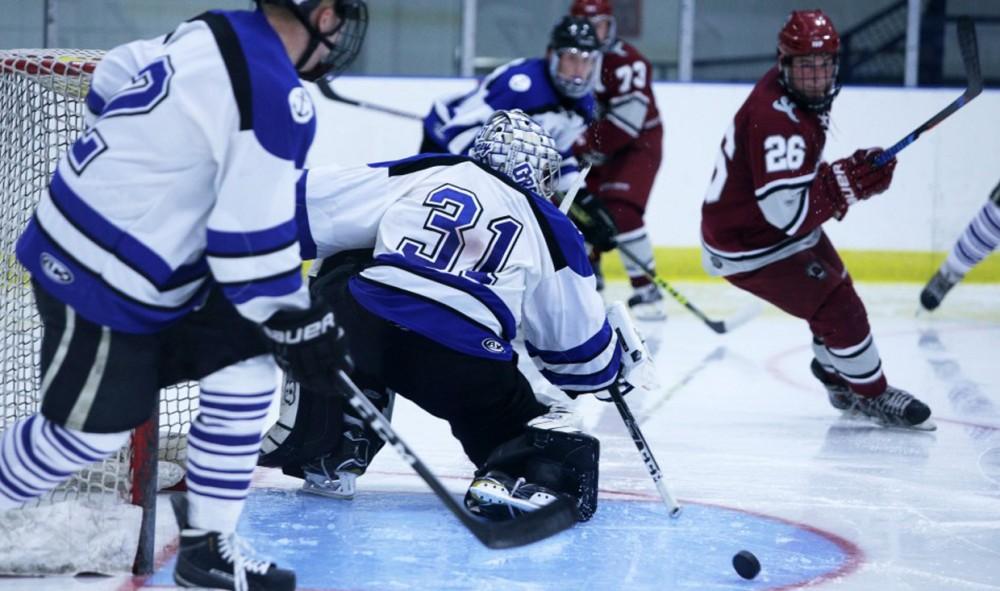 “Goalies almost never get credit for winning a game, but they always get blamed for losing a game,” once said Steve Carrell, an avid hockey fan and actor best known for his role as Michael Scott on “The Office.”

That much is true for the average sports fan. Common sense would dictate that the team with the fastest pair of skates and best puck handlers should win, right? The statistics may surprise you.

During the 2017-18 NHL season, the team with the best record in the eastern and western conferences, the Nashville Predators and Tampa Bay Lightning, both finished in the top five in goals allowed against in their respective conferences.

The formula would not only appear to point toward being able to bang the biscuit past the goalie, but to also have a guy in goal that’s good at not letting that happen to your own team as well.

Enter Jared Maddock, the senior in charge of stopping the puck for the GVSU DII men’s club hockey team.

In his fourth year navigating the net for the Lakers, Maddock has helped lead the team to a 9-3 record and while he has been a stalwart in goal for the past three-plus years, he said that his hockey career all started at the age of six and took off from there.

“I started playing hockey around when I was six years old in local leagues,” Maddock said “Then as I got older I got more and more involved and started playing in travel leagues in and around the Detroit area.”

What led Maddock to play goalie was a lack of skill out on the ice at forward or back on defense, and also a natural interest in the nuances of the position.

“I wasn’t that great at forward or D,” Maddock said. “Plus I really liked the equipment a lot. I was really obsessed with all the pads and stuff as a little kid and I thought it would be cool to be that guy.”

Although he had an obsession with hockey growing up and loved the sport, Maddock was on the dean’s list all four years at his alma mater, Plymouth High School in Detroit, and chose to prioritize academics over sports when choosing a college.

“I wasn’t recruited [by GVSU],” Maddock said. “I chose to just go to school instead of playing junior hockey and I had some academic scholarships here, so hockey was just an added bonus.”

Out on the ice this year, Maddock has been the security blanket for the Lakers when they have struggled with penalties out on the ice. Maddock, who gave up only 11 goals in GVSU’s first six games, feels that some of the team’s recent struggles can be attributed to a lack of focus, which he believes they will address as time moves on.

“I think the season has gone pretty well so far,” Maddock said. “I think recently we’ve been having some issues with consistency and coming in with the same effort every time from game to game.”

Maddock also felt that it was not a big issue to worry about moving forward.

“We’ve had some splits where we just need to come to play the second game of every weekend,” Maddock said, “We’ve played some tough teams lately but it’s not really bothering the guys and if we can maintain our focus throughout each weekend the rankings will reflect that come playoff time.”

Apart from trying to help his team constantly improve, Maddock has enjoyed his last four years in the club hockey program and said that he will always look back on his time at GVSU fondly.

“I’d say going to nationals the first two years I was here was probably the most fun I’ve ever had playing hockey,” Maddock said. “That and just Grand Valley in general has been a blast. It’s been a lot of fun and I’ve made a lot of friends that I’ll have for a very long time.”

When Maddock finally hangs up his skates for good, he plans on putting his double major at GVSU in finance and supply chain management to good use.

“My ideal job would be to be a hedge fund manager or a financial analyst for a sizable firm,” Maddock said.