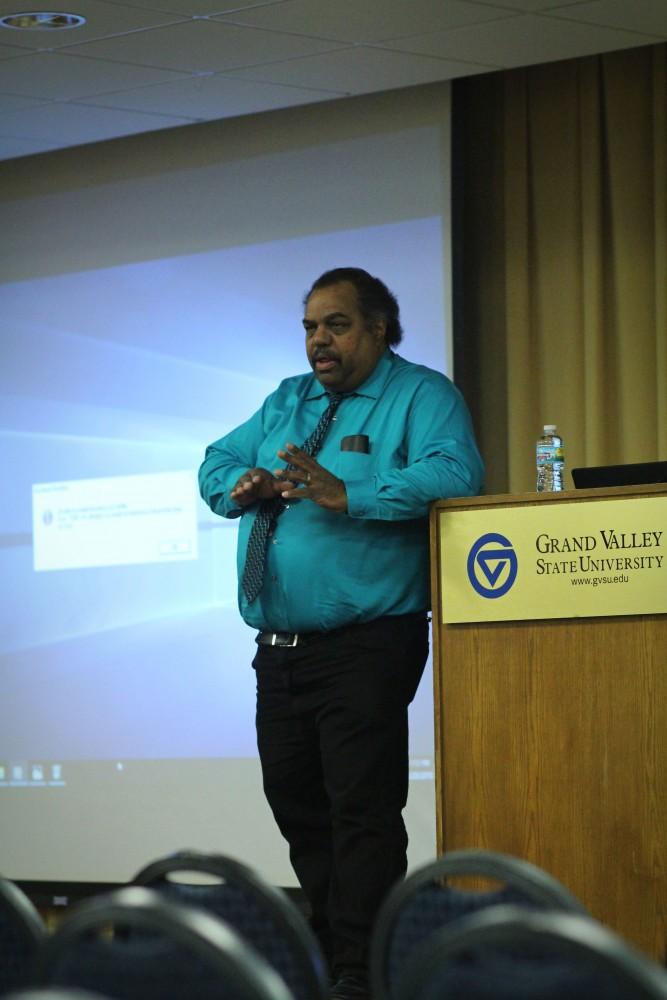 GVL / Sheila Babbitt Daryl Davis speaks about respecting opionions that are different than your own at the Accidental Courtesy event on Tuesday February 20th, 2018.

Musician and author Daryl Davis spoke to Grand Valley State University students about the events and research that inspired his book “Klan-destine Relationships: A Black Man’s Odyssey in the Ku Klux Klan.” The event took place in the Kirkhof Center Grand River Room on Tuesday, Feb. 20.

Davis first experienced racism when he was 10 and pop cans were thrown at him as he led his boy scout troop in a parade, holding the American flag. When his parents told him why white people had tried to hurt him, he did not believe them. This experience marked the beginning of his quest to answer the question, “How can you hate me when you don’t even know me?”

Students learned about Davis’ first encounter with a KKK member. After Davis finished a set with his new band at the “all-white” Silver Dollar Bar, the man put his arm around his shoulder and commented on his talent on the piano. The two sat together and Davis learned why the man had never talked to an African-American before because of the membership card he kept in his wallet, which contained the KKK insignia.

This encounter sparked the idea for his book, for which he interviewed the Maryland KKK Grand Dragon and others across the country to try to answer his question.

His first encounter with the Grand Dragon, or top-state officer of Maryland, Roger Kelly, was a surprise. Davis had his secretary make the appointment because he knew Kelly would recognize he was black by his voice. When they planned to meet in a hotel room, Davis was prepared for the interview with a Bible, cassette tapes and sodas to be hospitable.

When the Nighthawk, or KKK bodyguard, entered in front of Kelly, Davis recalled how Kelly froze, confused to see an African-American waiting to speak to them. The conversation was tense, with the Nighthawk reaching for the gun in his holster every time Davis moved.

Davis went into survival mode. In the middle of the interview, a sound alarmed them both, making Davis jump and put his hands on the table in front of them, prepared to knock both of them to the ground because he could not outrun a bullet. Davis recalled that he and Kelly locked eyes as though to ask each other who made the noise. Yet, Davis’ secretary discovered it was the soda cans falling because the ice had melted.

“The lesson taught is this: All because some foreign entity of which we were ignorant, that being the bucket of ice and cans of soda, entered into our comfort zone via the noise that it made, unbeknownst to us, we became fearful of one another,” Davis said. “Ignorance breeds fear. We fear those things we don’t understand. If we don’t put a lid on that fear and keep that fear in check, that fear in turn will breed hatred because we hate those things that frighten us.

“If we don’t keep that hatred in check, that hatred in turn will breed destruction. We want to destroy those things that we hate. Why? Because they frighten us. But guess what? They may have been harmless and we were just ignorant.”

After this encounter, Davis interviewed more Klan members and stayed in contact with Kelly. He emphasized the importance of conversations and listening to each other to be able to learn each other’s point of view.

“I did not respect what Roger Kelly had to say,” Davis said. “I did respect his right to say it.”

That respect has gone a long way, as Davis now owns the robes Kelly wore as an Imperial Wizard when he renounced his affiliation with the group. Davis’ collection of robes and people walking away from the hate group has grown to 45.

“The first time it happened I was shocked.” Davis said. “I realized while you were actively learning about somebody else, at the same time you are passively teaching them about yourself. They were seeing things in me I didn’t realize they were seeing. Our country, our society, is going to become one of two things. It has no choice.

“The more information and conversations you have, the more you can combat the issue,” said GVSU student Rachel Hecht. “I think he was a good storyteller. He had a good theme throughout.”