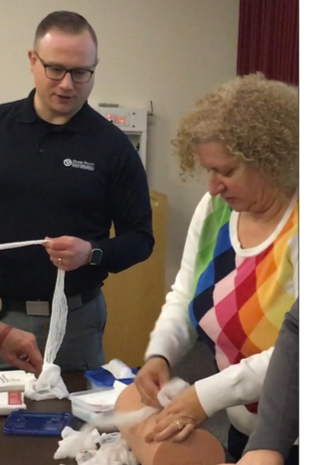 On December 14, 2012, a gunman walked into Sandy Hook Elementary School and took the lives of six adults and 20 children before taking his own. Since that day, there have been multiple mass shootings in the United States which include thousands killed and wounded. Emergency responders get there as quickly as possible, but many victims still succumb to blood loss. Through the Stop the Bleed program, Grand Valley Police Department offers the Laker community information and training on how to treat a serious wound and potentially save a life.

“Active shooter response training has gone through a lot in the past 20 years,” said GVPD Capt. Jeff Stoll.

“Police used to secure a perimeter and get SWAT involved, but we realized that was ineffective if the shooter was inside, so now we have a rapid response model wherein the officers are moving to engage the violent offender as quickly and efficiently as possible to neutralize the threat, however, emergency medical responders have to be cleared to assess the scene… Now we are asking, what about the people who are hurt during these incidents, how do we save them?”

According to Stoll, some basic first aid application can drastically increase the likelihood of survival during the wait for emergency responders. GVPD hopes that student organizations, faculty groups and other campus departments will arrange the Stop the Bleed seminars as preventative safety measures.

Created in 2013 by the American College of Surgeons after the Sandy Hook tragedy, Stop the Bleed attendees will learn to control bleeding by direct pressure, wound packing and the use of tourniquets. They will also learn to identify life-threatening bleeding and how to take further action depending on the location of the wound. According to research cited by the Stop the Bleed campaign, about 40 percent of trauma-related deaths are caused by uncontrolled bleeding, making it one of the leading causes of preventable death.

“At GVSU, we have combined this training with excerpts from FEMA’s ‘Be The Help Until Help Arrives’ campaign, which educates citizens on other important aspects of responding to emergencies, including ensuring your own safety as a helper and providing important information to 911 dispatchers,” said GVPD Officer Ryan Ykimoff.

You don’t necessarily need a first-aid kit to take action, but if there are no tourniquets accessible during an incident, don’t wrap the wound with anything else.

“A tourniquet is used to stop the flow of blood by wrapping around a patient’s arm or leg. It is then tightened until blood flow to that extremity is stopped, thereby stopping any bleeding on that extremity. It’s common that people try to simulate the effects of a tourniquet by wrapping a shirt, rope or some other material around someone’s extremity, but makeshift tourniquets won’t be nearly as effective and in some cases could cause harm. Instead, we encourage attendees to look to the other bleeding control skills, like direct pressure and wound packing,” Ykimoff said.

GVPD Sgt. William O’Donnell and Officer Ykimoff will continue to conduct these seminars for any department that would like to provide emergency training for their staff. To arrange a seminar, contact Sgt. O’Donnell at [email protected]