GV piano students challenged with ‘Carnival of the Animals’ 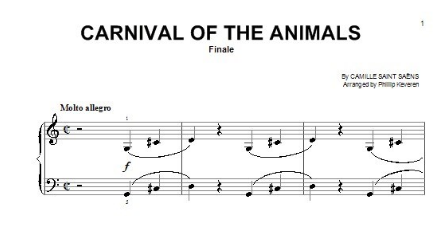 While most Grand Valley State University students spent their time studying for midterms and preparing for spring break, students in piano professor Sookkyung Cho’s Piano Studio rehearsed for their Feb. 25 performance of “Carnival of the Animals.” Composed by Camille Saint-Saens in 1886, “Carnival of the Animals” is a popular, playful piece that uses music to encapsulate various animals, from the tortoise to the kangaroo.

According to Cho, “Carnival of the Animals” was originally composed for two pianos and an orchestra, and the Piano Studio students were challenged further by performing these duets on a single piano. The concert consisted of 14 movements, with pianists switching between each movement. Cho said that this arrangement made students focus on their musicality.

“In terms of timing, since they’re not playing alone…How to begin each phrase, how to end each phrase, where to take time together, where to speed up. It has to be all coordinated,” Cho said.

Sophomore piano performance major Rebekah Shomsky said that playing a duet on one piano required knowing the music especially well and organizing how the parts line up.

“There are just a lot of details that you have to work out – who turns the pages, who pedals, things like that. You have to coordinate where your arms and hands are at all times so that you don’t get in the other person’s way,” Shomsky said.

This arrangement also gave students the opportunity to learn from each other and improve their musical performance through collaboration. Cho emphasized the importance of students knowing how their part interacted with their partner’s.

“If you have to be the leader, if you don’t have a good idea of what you want to say in that particular phrase, then your partner will never be able to follow you,” Cho said. “When you lead, you really need to know how to lead and how to be clear about your musical intentions.”

While students were able to discuss their individual movements during rehearsal, communicating during the performance through “sound, hand gestures and body gestures” is crucial along with careful listening. Shomsky said that the chance to work with her peers fostered growth in their musical communication.

“Communication is really important, and I think it’s something that pianists don’t work on as much as other musicians, because most of our repertoire is solo,” Shomsky said. “Playing a duet is a great way to practice communicating musical ideas and working creatively with other people.”

Shomsky said that collaborating with her classmates allowed her to “get to know them better and hear their unique perspectives on the music while we were rehearsing and performing.”

Cho performed “Carnival of the Animals” with a guest artist in 2018, which inspired her to pass it along to her students. The accompaniment of a poem and a rotating cast of pianists made the concert whimsical and entertaining, with each student performing up to four movements.

A video of the performance is still available for viewing on the GVSU Piano Facebook page.