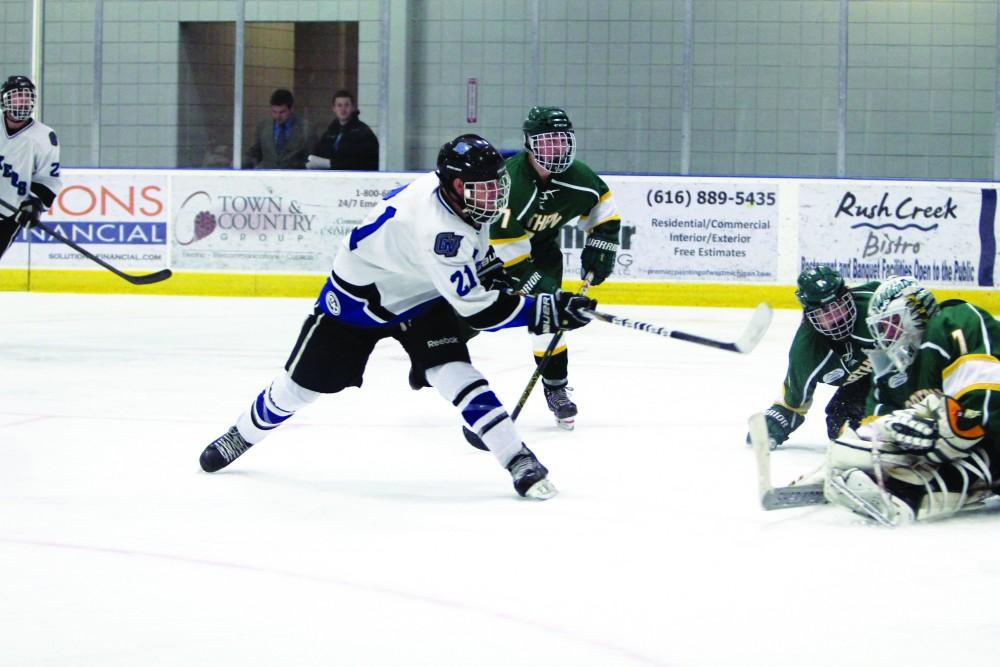 Playing back-to-back games against a team is normally seen as two separate games. But for coach Mike Forbes, there is no separation.

“I see it as a six-period game,” Forbes said. “Our goal is to go out and win the first three periods and then win the second three periods.”

The Lakers are no stranger to back-to-back games against teams this season, and their row with NMU was similar to their games against the University of Toledo.

GVSU (9-2) swept the weekend series, dominating in all facets in game one with a 5-0 win, and exploding offensively in the matinee with a 7-4 win.

“We were a lot faster than them on the ice,” said forward Colin Finkhouse. “We just looked for the open pass and crashed the net.”

Opportunities to score continued to be numerous in the second game against the Wildcats, as Finkhouse notched three of GVSU’s seven points. Much like their second game against Toledo, the game became much more aggressive, resulting in penalties on both sides.

“When you win the first game you give them a reason to play in the second,” Forbes said. “But we’re reasonably well conditioned and it pays dividends.”

Discipline and conditioning have cemented the team’s success as both goaltenders, Doc Hoekzema and Ryan Morey, continue to be the Iron Curtains of the Laker defense.

For Hoekzema, practices and games have become one and the same to him.

“I view everything through the same lens so everything feels the exact same,” he said.

Hoekzema said he and Morey continue to push one another in practice as both of them look to take the starting position in net.

“We encourage and push each other, but ultimately we just try to take what’s good from our experiences and go from there,” Hoekzema said.

That team mentality is present in the game, as the Lakers play like they practice.

“When we play, everyone has a role,” Finkhouse said. “We’ll joke about who’s gotten a goal and who hasn’t, but we play for the team and not just to pad stats.”

The Lakers will face off against St. Thomas University in another two-game series starting at home Friday night in Allendale.