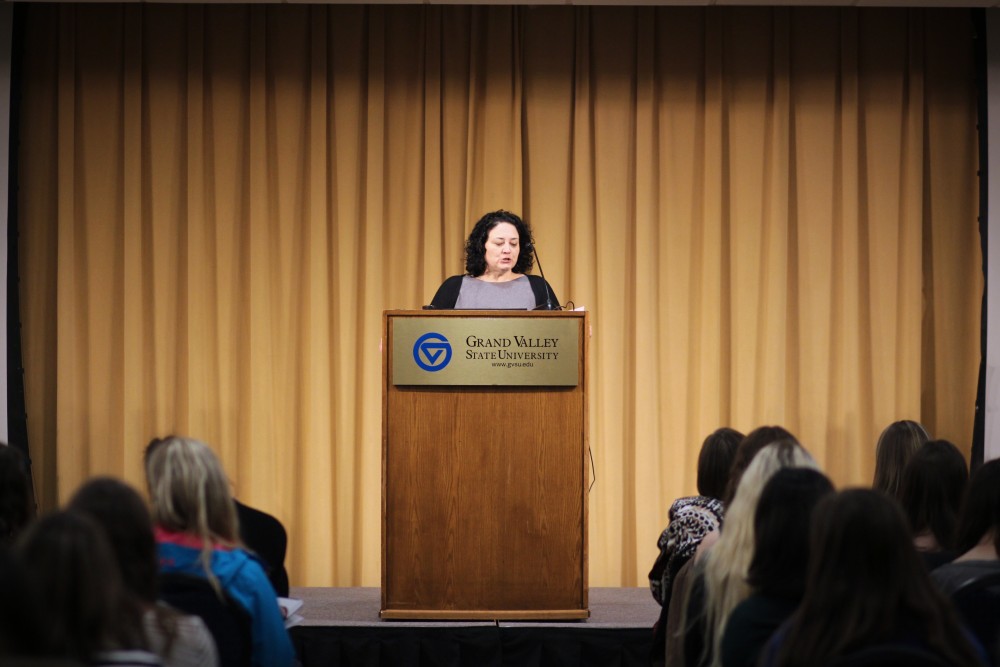 GVL / Sheila Babbitt Rebecca Traister, author of All the Single Ladies, is introduced at the Community Reading Project Event on March, 13th, 2018.

The Brooks College of Interdisciplinary Studies hosted its 13th annual Community Reading Project, inviting author Rebecca Traister to speak about the history of single women and her book, “All the Single Ladies.” The event was also part of Women’s History Month at Grand Valley State University. Attendees were able to ask questions and have books signed after the presentation.

“(The Community Reading Project) has always been based in the idea that a good book (leads to) a good conversation, and a good conversation leads to the start of changing the world,” said Jen Jameslyn, director of the Office of Integrative Learning and Advising for Brooks College.

Traister spoke on the history of single women in the U.S. and how women challenging social norms paved the way for today’s single women.

“I hope (students) learn to think about their own personal decisions and relationships as existing within a bigger political and social structure and think about how their lives, even though they may seem individual, personal and intimate, are shaped by bigger cultural messages, political realities, and legal and legislative realities,” Traister said. “(I hope) they begin to see the connection between our individual experiences and the broader forces in the country we live in.”

As a successful journalist and award-winning author, Traister recalled how people in her life finally relaxed when they found out she was getting married. She had been on her own for over a decade, and she lived in a New York City apartment with friends she had shared many life experiences with.

“I’d been single from my 20s and into my 30s,” Traister said. “When I was 35, I fell in love and decided to get married. I noticed in this personal and individual way, the people in my life began to treat me (differently). A lot of people in my life, when I decided I was going to get married, were so happy they seemed to indicate to me that now my life was really starting.”

Traister described the significant years-long effort it took for women to break down the separation of men and women into the public and private spheres, respectively.

“All of this activism, the labor movement, the suffrage movement, culminates the beginning of the 20th century,” Traister said. “Through this measure, the abolition, suffrage, temperance and repeal of temperance, you are looking at social movements in the United States that profoundly changed who had power and who could participate politically and professionally, development of new educational opportunities and new professional opportunities where entire populations of Americans who had previously been cut off from these opportunities.

“A lot of it was spearheaded by women who had the ability to devote their energies to this in part because they were not devoting their energy to their husbands and children.”

At this point, women were still being pressured to get married and reproduce, especially once the government promoted the baby boom. Traister said women were stuffed back into their domestic roles. Yet, Traister said, during the mid-1900s, rebellious, disruptive, insurgent movements began to rise, challenging the new norm.

“(What stuck out to me was) Traister’s statistical data throughout American history,” said GVSU student Hannah Remington. “Traister explained the historical proof of oppression to all women. Her evidence was very moving and showed America’s general gains toward an equal society. I (learned) you don’t have to be a man to be successful.

“Traister proved that women can lead social reform and empower other minority groups to have a voice.”