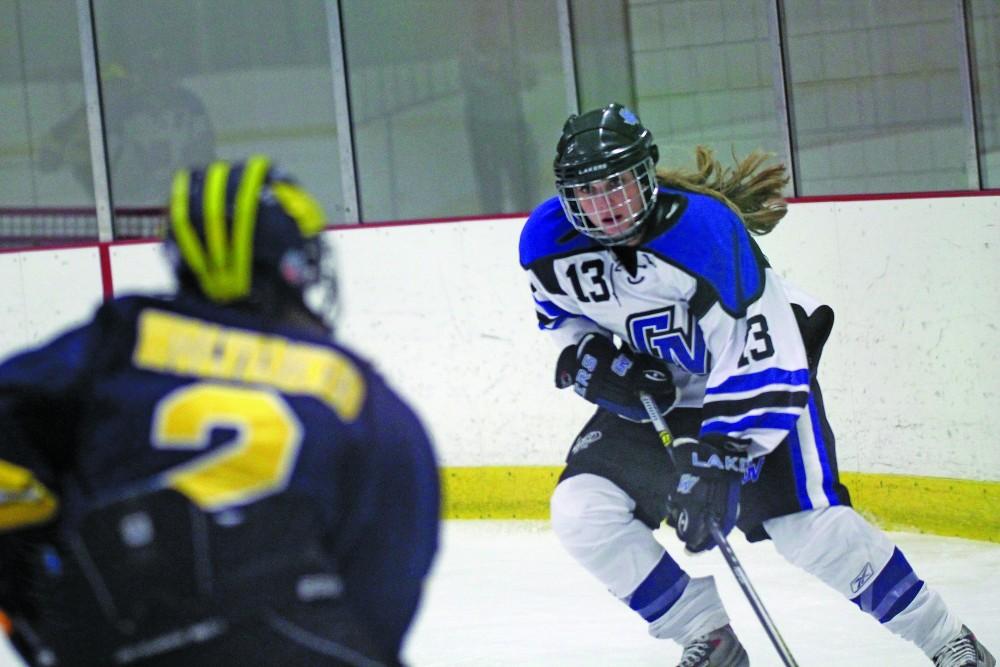 It has been a season of streaks for the Grand Valley State University women’s club ice hockey team, and that hasn’t been a good thing so far in 2014.

GVSU took the ice over the weekend for a two-game home series against ACHA Division I rival University of Michigan on a cold streak after losing three of its last four games, and the trend continued as the Lakers were unable to claim a victory in the 0-1-1 weekend at the Georgetown Ice Arena.

“I had been talking with the girls about how it’s all about preparation throughout the week,” said GVSU head coach Sean McKernan. “It may be lacking because of the success we had first semester, but we just have to outwork the other team.”

The effort to turn things around started off strong for his team, as sophomore forward Stacey Mathieu put home an unassisted goal to break a scoreless tie six minutes into the second period.

The lead didn’t last long, however, as Michigan made it a 1-1 game by beating Laker goalie Karen Sloboda with a quick tally to start the third period.

Defense and goaltending dominated the rest of the game.

GVSU had opportunities galore, and, despite knocking the puck off a couple pipes, the last 19 minutes of the third period passed with no score. An overtime frame wielded the same results, and the teams left the ice deadlocked with a 1-1 tie.

The offensive woes continued for the Lakers in game two.

The first period battle generated nothing but goose eggs on the scoreboard, as the two defenses remained as stingy as the night before.

Michigan finally found the elusive first goal in the second period, as the Wolverines managed to sneak a deflection by Laker netminder Taylor Watson. Down 1-0, GVSU soldiered on, managing a late offensive surge. The buzzer sounded before the horn had a chance to, however, and the teams entered the third period separated by one tally yet again.

The offensive frustrations carried into the third for the Lakers, as they wound up being shut out in a 3-0 loss to another in-state rival.

“Skill can only take you so far,” McKernan said. “We didn’t have the determination tonight. We just couldn’t get any offensive flow going.

“We couldn’t get our execution on the breakout, and Michigan took it to us.”

GVSU (12-9) has three games left before the start of the ACHA postseason, starting this weekend as the team makes the trip to Illinois to take on long-time conference rival Robert Morris University.

The two teams will clash in a somewhat of a “Winter Classic” on Friday as they take part in an outdoor game — the first in GVSU history.

“Those are two big league games that we need to take care of,” sophomore Kendra Myers said. “We can’t overlook them.”

“We just need to step back and refocus. We know we can beat these teams. Everyone just needs to believe.”