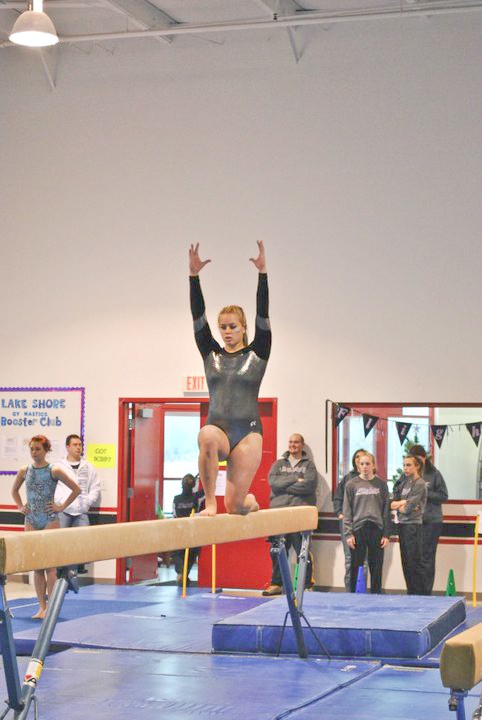 In front of about 520 competitors from nearly 50 different colleges, the Grand Valley State University gymnastics team held its own at the National Association of Intercollegiate Gymnastic Clubs’ national finals, including a Top 10 finish on the vault by junior Alexa Kitson.
Competing in Richmond, Va., the Lakers finished second in their preliminary session, as GVSU scored 132.475 – 12 points behind the Bulldogs of James Madison University. That did not allow the team to advance to the team finals on Saturday night, but GVSU still had its fair share of bright spots.
Kitson finished second on the vault during the preliminary round with a 9.45, and followed it up on Saturday with a tenth-place finish in the finals, scoring a 9.25.
“I was really excited,” said Kitson, who is in her third year with the GVSU gymnastics team. “I’m pretty competitive so I was telling myself that I was not flying all this way to miss out on the finals, so I was pretty pumped.”
Kitson was the only Laker to make it through to the finals, but that does not mean it was not a successful weekend for the team. Due to some injuries and financial issues, GVSU was only able to send out about half of the girls on the 14-person roster.
“Second place in the our preliminary session very exciting because we only had half of our team and weren’t sure if we would place at all,” said team captain Kristi Hopkins, who came in ninth in her preliminary floor session with a 9.0. “I definitely think we would have placed higher if we would have had our entire team, but it was a very fun weekend overall.”
Though the Lakers were unable to make it past the preliminary round, the team still finished ahead of more than half of the field at the NAIGC finals. Hopkins added that the large amount of teams made the competition stiff, but it also allowed the team to meet and befriend gymnasts from all over the country
“It is always nice to meet people from other schools and teams that you have something in common with,” she said. “Most of the teams get along very well and cheer each other on during competition even though we are competing against each other, which is awesome.”
For a team that did not know quite what to expect before the national championships started, the Lakers were able to walk out with their heads up.
“Overall we were pretty happy as a team,” said Kitson. “We weren’t very well known when we went in there, and we ended up taking 20th in the nation as a team, which is pretty good for us, we were all happy with how we did.”
[email protected]