‘Why Didn’t They Get Legal?’ tackles immigration issues 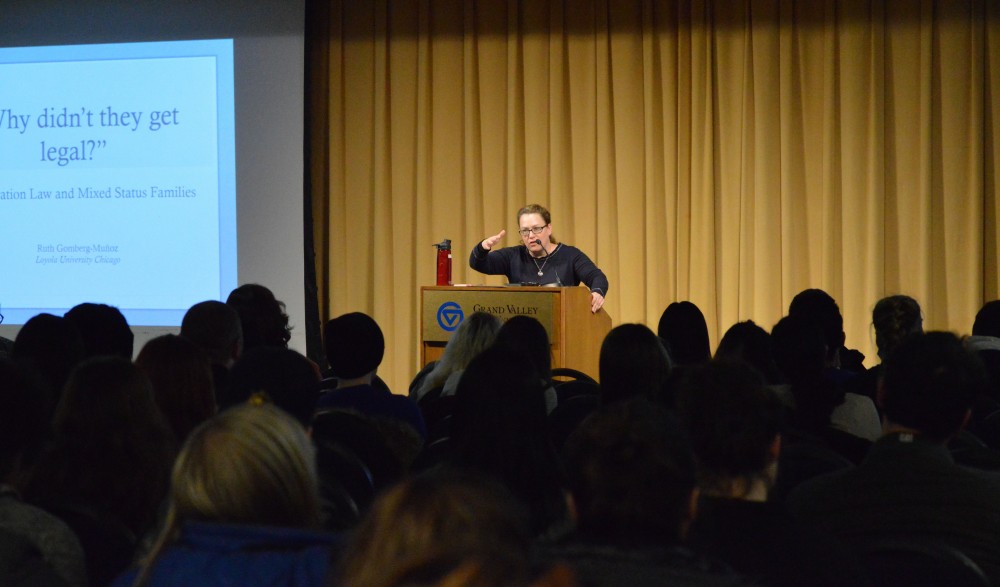 Visiting professor Ruth Gomberg-Muñoz fitted an audience of students and faculty members in the shoes of undocumented immigrants in the U.S. on Thursday, Jan. 25.

Gomberg-Muñoz was at Grand Valley State University to lead a lecture titled “Why Didn’t They Get Legal?” The lecture took place in the Kirkhof Center Grand River Room and was live-streamed to an audience on the Pew Campus.

Gomberg-Muñoz explained not only why immigrants don’t become legal, but why they can’t. When illegal immigrants decide to try to become citizens or cross the border, they face the difficult reality of governmental policy and the struggle to meet qualifications, punishment, grounds of inadmissibility and other hardship. Gomberg-Muñoz described these as the four hurdles they must conquer.

“Nobody chooses to spend $10,000 to risk their life crossing a desert if they could just do it the right way,” Gomberg-Muñoz said. “Immigration statuses are a question of policy. People aren’t born inherently being a citizen or being undocumented. Policy shifts in the United States have erected specific barriers that prevent people from changing their status, even those who qualify for a visa, even people with U.S. citizen relatives. That’s what helps create the undocumented population in the United States.”

She addressed that while many people believe they know the intricacies of immigration, the truth of the process that immigrants—and specifically Latin Americans—go through when they illegally cross the border is not well-understood at all.

“I think one of the most important things for me is that students develop a better sense of how complicated U.S. immigration law is,” Gomberg-Muñoz said. “We often talk about immigration issues as if they are simple, when in reality U.S. immigration policy (is) anything but simple and the lives of undocumented people are anything but simple. One of my primary goals would be that students (have) a better sense of the law and how complicated it can be.”

While analyzing what undocumented individuals face when trying to qualify for citizenship, Gomberg-Muñoz shared the stories of the people she interviewed when she had just begun her research about the Deferred Action for Childhood Arrivals (DACA) program.

“I think that the sad part is this is happening to so many people and there is not much we can do about it,” said GVSU student Megan Laplatt. “The thought of kids being taken out of the country makes me mad. I think the politics of it is unfair. (The fact) that politics are coming in and telling people whether they can stay does not sound like America to me.”

Gomberg-Muñoz is an associate professor at Loyola University Chicago, and she specializes in research and the fields of political economy, migration, race and class, and Latinos in the U.S. She is the author of two books, 2016’s “Becoming Legal: Immigration Law and Mixed-Status Families” and 2011’s “Labor and Legality: An Ethnography of a Mexican Immigration Network.” She has also published articles about migration and transnational labor, legality and agency. For 10 years, she has conducted field work among ethnographic communities of undocumented people in the U.S. and Mexico.