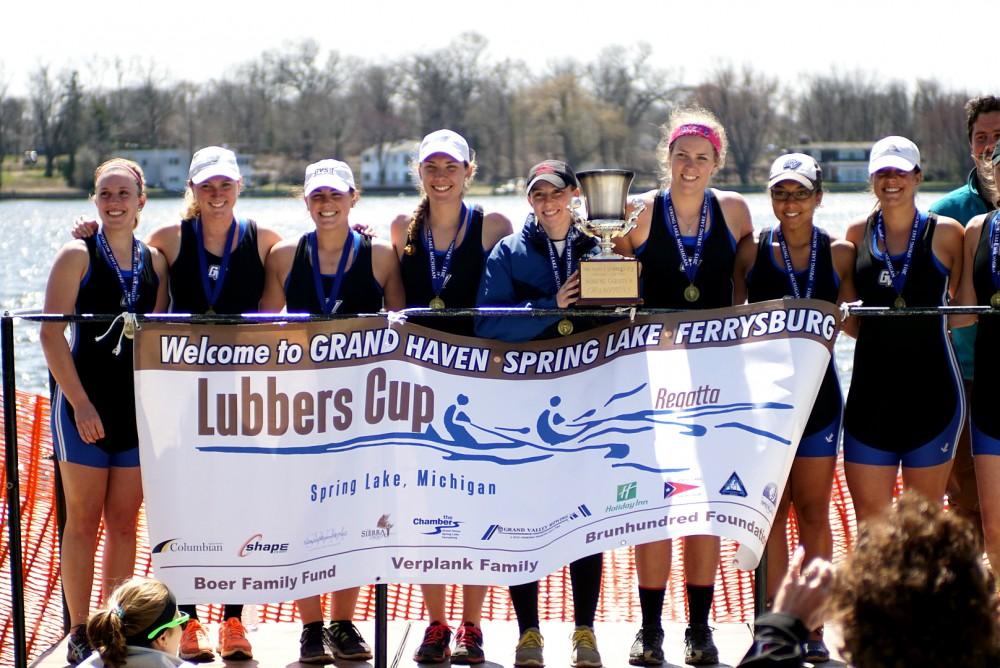 Sitting back in his chair and removing his headset, a gentleman’s face lights up as he is asked to recount the history of rowing at Grand Valley State.

Richard Laurance, a nationally renowned coach who oversaw the Laker Navy from 1995-99, opens the tale in 1967, when GVSU saw the birth of the rowing club and its maiden voyage on the waters of Spring Lake as the first sport in Laker history.

In its first 12 years, rowing was a varsity sport, and even after it became a club sport, former GVSU President Don Lubbers continued to support the program. Laurance chuckled as he recounted how he became responsible for planning the first Don Lubbers Cup Regatta.

“We had raced against MSU for a while and we decided we need a trophy,” he said. “Don Lubbers asked if I would help start it, and it’s incredible to see what it has become.”

Finishing up the story with the career of current coach John Bancheri and GVSU’s continued rise to prominence, Laurance said it was an honor to come back to Spring Lake and commentate for the program he once coached.

He said that many of the program’s coaches were former rowers and that Bancheri’s tenure has continued to draw high-level competition and teams from around the Midwest.

Now celebrating its 20th year, the Lubbers Cup has grown to include 11 universities and four high schools.

“To build to that level…it’s a very rewarding feeling,” Bancheri said. “This is a major regatta in the Midwest and there are a lot of Division I varsity and club teams we get to compete against.”

Among the universities invited to the Lubbers Cup were MSU, Michigan, Purdue, Cincinnati and many other top programs. The close finishes elevated the intensity of the races over the weekend, where teams finished mere seconds apart from one another.

“We’ve grown a lot over the season and it has had its ups and downs,” said senior Becca Mier. “We just tried to focus on doing our best and not focus on the other boats.”

Overall, the women took home the Chad & Brie Jedlic and Don & Nancy Lubbers Cups for winning the Varsity Eights and 2V Eights. The men finished in second behind Michigan in the same events.

Alumni and fan support was strong over the weekend, and their continued presence in the program has assisted in the regatta’s continued growth and prestige.

“It’s really cool seeing everyone come back from over the years,” said team captain Kaitlyn VanBoven. “GVSU has an incredible legacy and I’m proud to be a part of it.”

With only a few weeks left before the 47th MACRA Championship Regatta in Ypsilanti, Michigan, the men and women of the Laker Navy look to concentrate their efforts on preparing as much as they can in the meantime.

Austin Gentry, a junior transfer from Orange Coast College in California, said that once graduation is over the teams will be spending more time on the water.

“I came to Grand Valley because they have a great rowing program and deep tradition,” Gentry said. “We had a strong showing versus Michigan, and even though we lost, we showed that we have the willingness to push them.”