Graduated forward Tommy Carey looks back on a resilient, successful career at GVSU 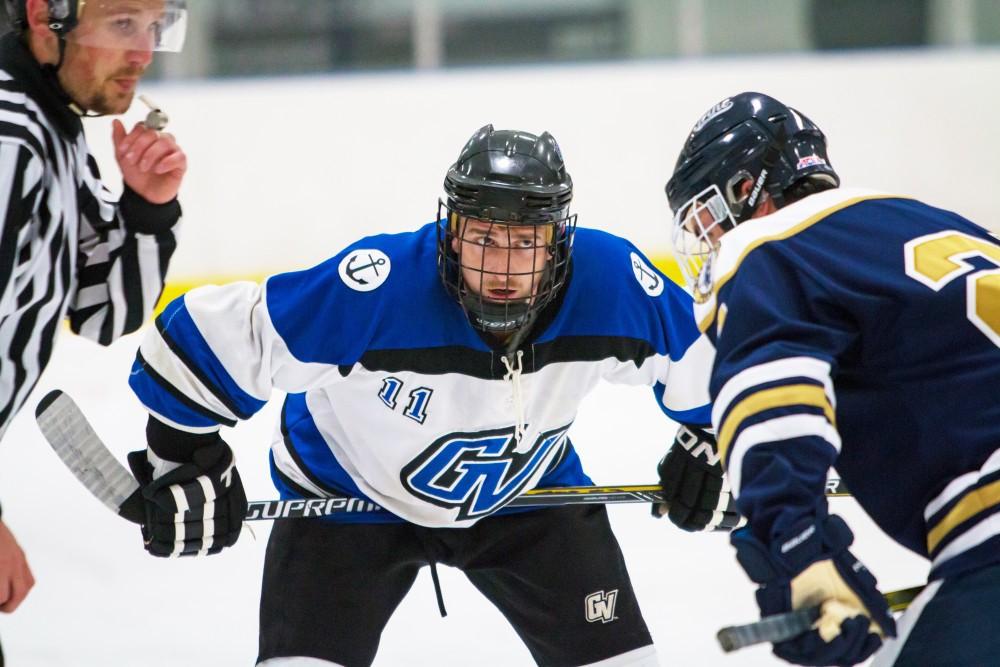 “The biggest thing we get out of it is seeing the kids smile. And hopefully we will also see that the lessons we’re teaching, not only the fundamentals of hockey, but also the life values are sinking in,” said National Hockey League Hall of Fame Defenseman Bobby Orr.

That smile – and the fundamentals that came with it – was present on former Grand Valley State forward Tommy Carey’s face from a young age.

“I first started playing hockey around the age of three,” Carey said. “I got on the rink from a young age and it really took off from there.”

Carey grew up living, eating and breathing hockey, playing on multiple youth hockey teams each year growing up and then eventually travel hockey once he reached high school.

However, at the conclusion of high school, Carey’s hockey career took a long and winding path before he ended up playing at GVSU.

“Originally after I graduated high school I went to Eastern Michigan for a year,” Carey said. “But after playing hockey there I just didn’t really like the culture and on top of that, I felt I was just too close to home.”

From there, Carey says he began searching for another school a little bit further away from his hometown of Livonia, Mich. on the lower east-side of the state near Detroit.

The bumps in the road did not end there for Carey though. He first had to make the club hockey team, which was a major question at the time because Carey had just broken his ankle a few weeks prior to tryouts.

“Going into tryouts I had to stuff my foot inside the skate and really tough it out,” Carey said of his ankle before tryouts his freshman year at GVSU. “The DIII coach approached me and said to sit it out and I could play for him on the DIII team in a couple weeks.”

Carey told the coach that he was not interested in playing DIII hockey and continued to tough it out for another two days of tryouts with a broken ankle, after which his grit was rewarded with a spot on the GVSU men’s DII club hockey team.

The rest was history for Carey, who contributed serious minutes during his sophomore year while helping GVSU make a deep run into nationals, which was his favorite memory while playing hockey at GVSU.

“We were at nationals and it was late in our game against [New York University],” Carey said. “We were up 2-0 but NYU ended up coming back to tie it in the third period and their goalie started chirping about how we were done for, that we were going to choke.”

That was enough to charge up Carey and the Lakers going into overtime though, as Carey ended up having the last laugh.

“Yeah that chirping only motivated me to make him eat his words,” Carey said. “Then about five minutes into OT I got a nice pass in front of the net and flicked it up and in off the upper right part of the goal post and that was it.”

Carey then went on to lead the GVSU men’s DII club hockey team in points his junior year while helping lead the Lakers to a 24-0-3 record before being upset in the first round of the playoffs by ACHA Central rival Adrian.

“Tommy is one of the fastest players in our division,” said head coach Carl Trosien after a game against Lindenwood-Belleville University during Carey’s senior season. “That speed has allowed him to attack the net consistently and be a big asset for our club.”

His senior year he played only a half dozen games, helping GVSU get off to a 6-0 start while averaging 8.83 goals per game before leaving the team to prepare for graduation.

Moving forward, Carey will take his bachelor’s degree in supply chain management and continue his co-op with Magna International in their sales management and planning department.

“Ideally, like five to 10 years from now, I hope I’m working as a supervising manager,” Carey said. “Then maybe once I have my career set I can get back into coaching, maybe youth at first then high school later on.”